Frida Palmér was an astronomer and a grammar school teacher. In 1939, she was Sweden’s first woman to gain her Ph.D. in astronomy.

Frida Elisabeth Palmér was born in 1905 in Blentarp near Sjöbo in southern Sweden. She was the only child of Hans Palmér, a building contractor, and his wife Elsa Palmér, née Jeppsson. After her father’s death in 1910, mother and daughter moved Järrestad, west of Simrishamn on the east coast. Frida Palmér took her school certificate in Simrishamn in 1922 and then matriculated at the girls’ grammar school in Lund in 1925. In the autumn term that year, she was signed on at the University in Lund where she read astronomy, physics and mathematics, and belonged to the Lund nation student union. She gained her Bachelor’s degree in 1928. In 1929, she became an extra permanent amanuensis at the Lund observatory, and in 1930 she passed her state examination. In the spring of 1929, Knut Lundmark became director of the observatory and came to be of great importance to her, as her mentor and friend.

In her research, Frida Palmér specialised in variable stars. A variable star is a star whose brightness fluctuates over time. Many variable stars are regularly periodic, but some fluctuate irregularly. These irregular variables were the subject of her doctoral thesis. The pulsating red giants, with about the same mass as the sun, are most often at the end of their lives. Others are red supergiants with masses many times that of the sun.

Frida Palmér made her debut in the astronomical literature in 1928 with a catalogue of 99 star positions, written with an amanuensis colleague, Jöran Ramberg, as an assignment from that time’s counterpart of the modern Swedish National Land Survey. The catalogue built on observations made using the meridian circle at the Lund observatory. With this instrument from 1874, observations of stars’ passage through the meridian could be made, which made it possible to decide their positions accurately. Frida Palmér was a skilful observer who carried out ambitious observation programmes with the meridian circle to collect data for her research. This work demanded special work clothes as protection against the night cold. Frida Palmér had learnt the foundations of her handwork from the observer Walter Gyllenberg. As a specialist on meridian circle astronomy, he became one of her mentors and was the person who suggested that she should study the positions and proper motions of stars.

A star’s proper motion is its apparent movement across the heavens. Proper motions are very small and demanded observations made with decades of time between them to be measurable, with the accuracy of measurement that was possible in Frida Palmér’s times. She had thus to combine her own observations with older data in the literature. The proper motions of stars can be used among other thing in statistical investigations for estimating the distance and absolute brightness of stars.

In a statistical paper from 1931, Frida Palmér presented her observation programme for irregular variables and pointed to investigations she was planning to carry out for her doctoral thesis. One more extensive work appeared in 1932, in which she presented results from her observation programme: positions for 241 stars that she had measured with the meridian circle between 1928 and 1930. Frida Palmér had gathered older positions from the literature, from measurements made from 1790 and onwards for 117 of these stars, to estimate their proper motions. In a smaller paper from 1937, she published the positions of 96 stars, mostly variables that she had mainly observed in 1935, partly the same stars as in the catalogue from 1932.

Frida Palmér held the post of permanent amanuensis at the Lund observatory in 1933 to 1936. She took her Licentiate examination in 1934. She was dependent on scholarships and extra jobs to manage her sometimes strained economy. During the 1930s, she stepped in sometimes as a teacher at the girls’ grammar schools in Malmö and Karlskrona. Scholarships enabled her to undertake numerous research and study trips. Apart from travels to Germany, she also visited Austria, Hungary, Czechoslovakia, Norway, Finland, the Soviet Union, the Netherlands, Belgium and France. Her impressions and experiences during her travels were described enthusiastically in letters to Lundmark. In her doctoral thesis, Frida Palmér particularly held up the cooperation with her colleagues at the observatory in Berlin-Babelsberg as important. Among the astronomers in Berlin was Richard Prager, one of the leading experts of that time on variable stars. He gave her access to his card index over the literature on variable stars and supported her work.

Frida Palmér defended her doctoral thesis in Lund on 28 January 1939. It has the title Studies of irregular variable stars and presents a catalogue over the proper motions of 182 irregular variables, based on her own observations. An extensive analysis is made, based on her own data and on the literature. She investigates the irregular variables’ changes in brightness over time (their so-called light curves), their spectra, and also their apparent and absolute brightness. In addition, she studies their distribution in the Milky Way, their proper motions, their speed along the sightline (so-called radial velocity) and their distance. She also investigates how light is absorbed by dust and gas in space between the stars, with results close to modern values.

The statistically orientated so-called Lund School in astronomy had grown up round Professor Carl Charlier at the Lund observatory during the first decades of the 1900s. Charlier and his colleagues, among them Gyllenberg, used statistical methods to investigate the distribution and motions of the stars in space. Several of the investigations in Frida Palmér’s doctoral thesis were made in the spirit of the Lund School. Her thesis mainly dealt with stars in the Milky Way, but the final chapter deals with irregular variables in other galaxies, which were closer to Lundmark’s interests.

After defending her thesis, Frida Palmér set off into Europe once more. She participated at a meeting of the Astronomische Gesellschafts in Danzig (now Gdansk) at the beginning of August 1939, and just before the outbreak of the second world war, she arrived at observatory in Belgian Uccle. With the astronomers who were not mobilised, she continued working on meridian circle astronomy and participated in work where time signals from different radio transmitters were compared. The situation in Belgium was soon assessed as insecure and in January 1940 she returned to Sweden.

During the second world war, Frida Palmér served in Stockholm, attached to the signals intelligence agency Försvarets radioanstalt from March 1940 until December 1945. She advanced from being a clerk to assistant and in time became the director of a group called 53g. Included in her assignment as a systems analyst was to decode messages from the Soviet navy in the Arctic Ocean. Frida Palmér was fluent in English and German — in which she wrote her scientific articles — as well as French and Russian. In her civil work, she translated astronomical articles by Soviet colleagues to Swedish and at the signals intelligence agency her skills in Russian were an important asset.

Frida Palmér made her last published contribution as a professional astronomer with a literature study to determine the proper motions of 98 red variable stars. The catalogue is dated Stockholm, December 1943, but was first published in May 1945 in Lund. She participated in the Lund observatory’s expedition to Skelleftehamn in northern Sweden to observe the total eclipse of the sun on 9 July 1945. The same year, she investigated the possibilities for travelling to the USA for astronomical studies, encouraged by Lundmark. These plans were never realised and this ended her active life in professional astronomy.

In 1946, Frida Palmér was appointed as a teacher of mathematics and physics at the Halmstad grammar school. She moved to Halmstad with her mother, who had already moved in with her during the war years in Stockholm. Frida Palmér was a respected teacher, but apparently did not feel at home in the teaching profession. During the years in Halmstad, she kept in contact with several colleagues in astronomy, made several journeys abroad and read a good deal. In 1961 she was awarded the medal Nordstjärneorden.

In the astronomical literature, we can follow how Frida Palmér’s research was received. From the late 1930s to the late 1960s, her work was cited quite regularly in journals as well as in bibliographies on variable stars. It is striking that Frida Palmér is mainly cited as a source of data, for example on proper motions. One exception is her investigation of how interference between changes in brightness with different periodicity can give a variable star an apparently irregular fluctuation in brightness, which interested some colleagues. Most of the stars that Frida Palmér supposed to be irregular variables are today classified as semiregular variable stars.

The natural sciences were dominated well into the 1900s by men. Astronomy was no exception, but a change began to take place towards the end of the 1800s. At the Harvard observatory in the USA, women astronomers had made important contributions at that time. In Sweden, the slow reformation of the lop-sided gender balance was started somewhat later. As an example, from 1907 onwards, women computers (as they were called) were employed at the Lund observatory to do routine astronomical calculations, but none of them did any independent research. Karin Schultz took her Licentiate examination in astronomy in 1918 at Stockholm College (later University), but she was an exception. After Frida Palmér’s defence of her thesis, it took until 1956 in Sweden before two more women — Ingrid Torgård and Aina Elvius — received their doctorates in astronomy.

Frida Palmér died of stomach cancer in Halmstad in 1966. She is buried in Blentarp Cemetery, in the same grave as her parents. 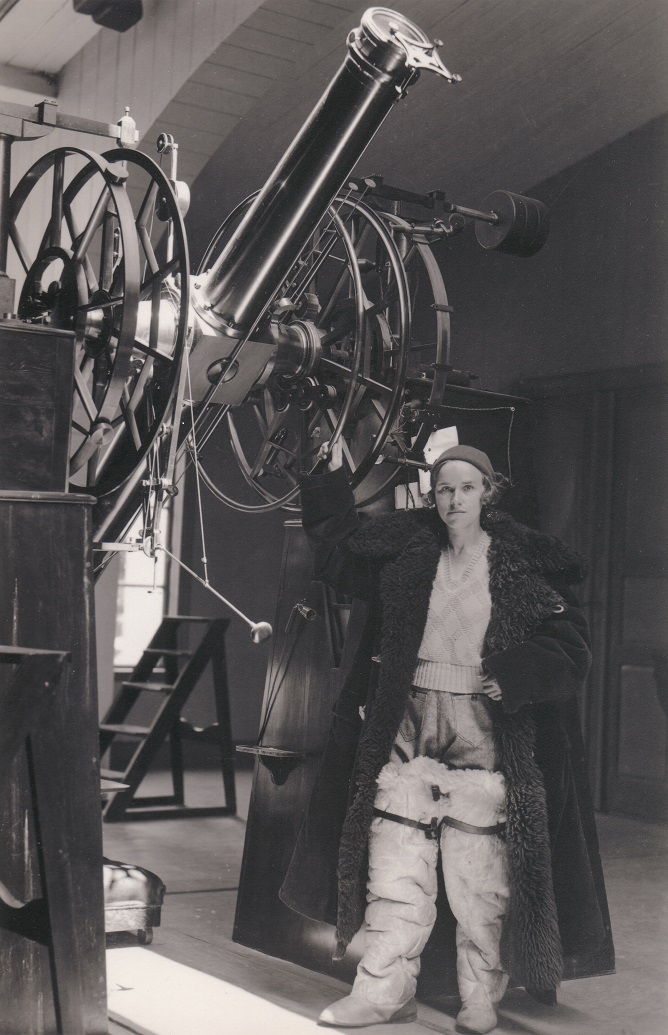