Teres Torgrim was a teacher who taught at itinerant Sámi schools (known then as “nomadic schools”) and a purveyor of public education. Her public education role involved her particular interest in handicrafts and Sámi textile culture.

Teresia (Teres) Torgrim was born in 1891. She was the first-born child of Otto William Zeidlitz and his wife Frida Albertina, née Falck. The family settled in Pajala following the father’s appointment as a pastor. The children grew up in an open and welcoming home. Their parents spoke several languages and often engaged in providing assistance to those of lesser means. Teres Torgrim’s father ran a school in their yard for the local children which she and her siblings also attended. The parents’ extensive linguistic skills doubtless entailed an expectation that Teres Torgrim and her siblings would use a range of languages on a daily basis. Thus, as a young child Teres Torgrim had already mastered the German and English languages in addition to Swedish and Finnish.

Teres Torgrim was given the opportunity to undertake further studies. She was accepted at the junior school teacher-training programme in Haparanda. During her training period she received an annual study stipend of 200 kronor. The stipend entailed an obligation to accept whichever post she was given, and in Teres Torgrim’s case she was posted to the Pahtajärvi school. On obtaining her junior school teaching qualifications in 1910 she was accepted for further teacher training in Umeå, but following what later proved to be an erroneous medical diagnosis she was unable to begin this course.

During the summer holidays of 1912 Teres Torgrim applied for a post as catechist for Vittangi congregation. This post involved teaching Sámi children while they were residing at their summer living quarters. Teres Torgrim’s first posting within the Sámi schooling enterprise was at Talma Sámi village in Láimoluokta/Láimmu on the shores of Torneträsk. Teres Torgrim sometimes found this initial period as a catechist to be challenging. She found it taxing to wear the local dress and learn the local language, as well as spending the summer living in a goahti. Teres Torgrim learned Northern Sámi, participated in Sámi cultural events, and learned to prepare animal hides, collecting and preparing grasses which were stuffed into footwear, as well as how to gather and use various herbs.

During the summer of 1914 Teres Torgrim returned to the Kiruna mountains in order to serve as an interpreter for Professor Herman Lundborg, who at the time was engaged in the major studies being undertaken by Statens institut för rasbiologi (state institute for racial biology) in what was then called Lappland. She subsequently returned to her post as catechist after which she was appointed to the small forest-Sámi village of Vivungi. On Christmas Eve in 1915 Teres Torgrim received a telegram informing her that thanks to a recommendation from Herman Lundborg she had been appointed to the Hall reformatory in Södertälje. Teres Torgrim arranged for a substitute to cover her job in Vivungi and travelled to Hall, where she remained for two and a half years. Following another few years in the south she returned to her post in Vivungi. When this school closed in 1921 Teres Torgrim was given a job at the Jukkasjärvi seasonal school.

The educational system underwent several changes during the time that Teres Torgrim was a catechist and a teacher at Sámi schools. For a long time this kind of work involved spending the summers in the mountains, which allowed school pupils to live at home with their families in the summer quarters. The ghoaties that Teres Torgrim lived and worked in during her initial summers were gradually replaced by turfed huts. For part of the winters the children would be taught at a fixed location where they were also boarded whilst the teachers lived at special quarters. At the boarding schools the children were sent to a type of wooden hut that was unfamiliar to the Sámi. There was also a housekeeper present. The teachers used similar wooden huts to teach in, namely a school ghoatie. These wooden huts have subsequently been highlighted as cold and unhealthy buildings. Jukkasjärvi Sámi school was not supplied with a heater until 1943 and, following changes to Swedish regulations, more fit-for-purpose buildings were inaugurated at a new location, comprising a school house, boarding accommodation for around 80 pupils, as well as three teachers’ quarters. Autumn and spring school terms were introduced whilst the temporary seasonal schools were closed.

Teres Torgrim attended the Sámi school training course in Luleå, where the teachers received particular instruction in protecting the Sámi culture of the reindeer-herding Sámi children. Teres Torgrim was also tasked by the school inspector to collect the textile patterns found in Sámi homes in Jukkasjärvi and Vivungi. These patterns were to be incorporated into handicrafts instruction. This became the basis of a valuable collection of patterned knitted mittens.

Teres Torgrim’s experiences gained in Hall combined with her interest in children with special needs resulted in her becoming responsible for the special needs class at Jukkasjärvi Sámi school. In the autumn of 1934 it was decided that this class would be withdrawn. Teres Torgrim, at her own expense, travelled to Stockholm to appeal against this decision before Otto Holmdahl, the director general of Skolöverstyrelsen (Swedish education board), but despite her efforts the class was nevertheless withdrawn.

From the 1943 inauguration of the school until her retirement in 1951 Teres Torgrim served the permanent Sámi school in Jukkasjärvi. Her pedagogic methods were innovative, including being the first to use a flannelboard in her classroom teaching. She had learned of this method when American Salvation Army soldiers had visited the local area, leading her to create her own flannelboard for use at her school.

During one of her travels Teres Torgrim met the man she married, Lars Togrim, who hailed from Ovanåker in Hälsingland. They married in 1936 and resided in Poikkijärvi. Teres Torgrim was already caring for a foster daughter named Margit, whose mother had died in childbirth in December 1921. In 1937 the couple expanded their family by adopting a boy named Örjan who came from a group of motherless children. The Torgrim family, now numbering four individuals, also sometimes provided accommodation for children with special needs in their house.

Their home in Poikkijärvi was known as Tornegård and was very welcoming. The interior decoration displayed an interest in local history and contained collections of items, resembling a local history repository. This also included a much talked about library. Teres Torgrim was productive within several spheres of activity. Her play entitled Luciafest i en nomadskola aired on the radio in 1950. She also translated work by Lars Levi Læstadius into German. When the local Husmodersförening (equivalent of Women’s Rural Institute) was set up in 1951 Teres Torgrim was elected as its chair. She remained an active textile handicrafter until very late in her life and the local sewing circle held its meetings at Tornegård. During the 1950 to 1970 period Teres Torgrim’s life and activities were often acclaimed in various newspaper articles.

In 1978 Marika Larsson, the handicrafts consultant, published a book called Stickat från Norrbotten. A significant amount of this work was based on information received from Teres Torgrim, whose collection of both knitted mittens and ribbons had grown over the intervening years. When the floors of Jukkasjärvi church underwent repairs in 1947 the lids of coffins which predated 1748 were opened, revealing exceedingly well-preserved pieces of textiles. Teres Torgrim obtained funds to cover the use of loupes and magnifying glasses to recreate these newly revealed textiles. She found clear connections to contemporary patterns still in use in the area. She and her colleague, Aina Nilimaa, retrieved patterns from the graves and spent their lives trying to make them generally known to the wider public and to ensure their use. It is probable that without her efforts the knowledge of the “grave mittens” in Jukkasjärvi church and the “Vivungi mittens” would have been lost to posterity.

Teres Torgrim died in 1976 and is buried in Poikkijärvi cemetery. 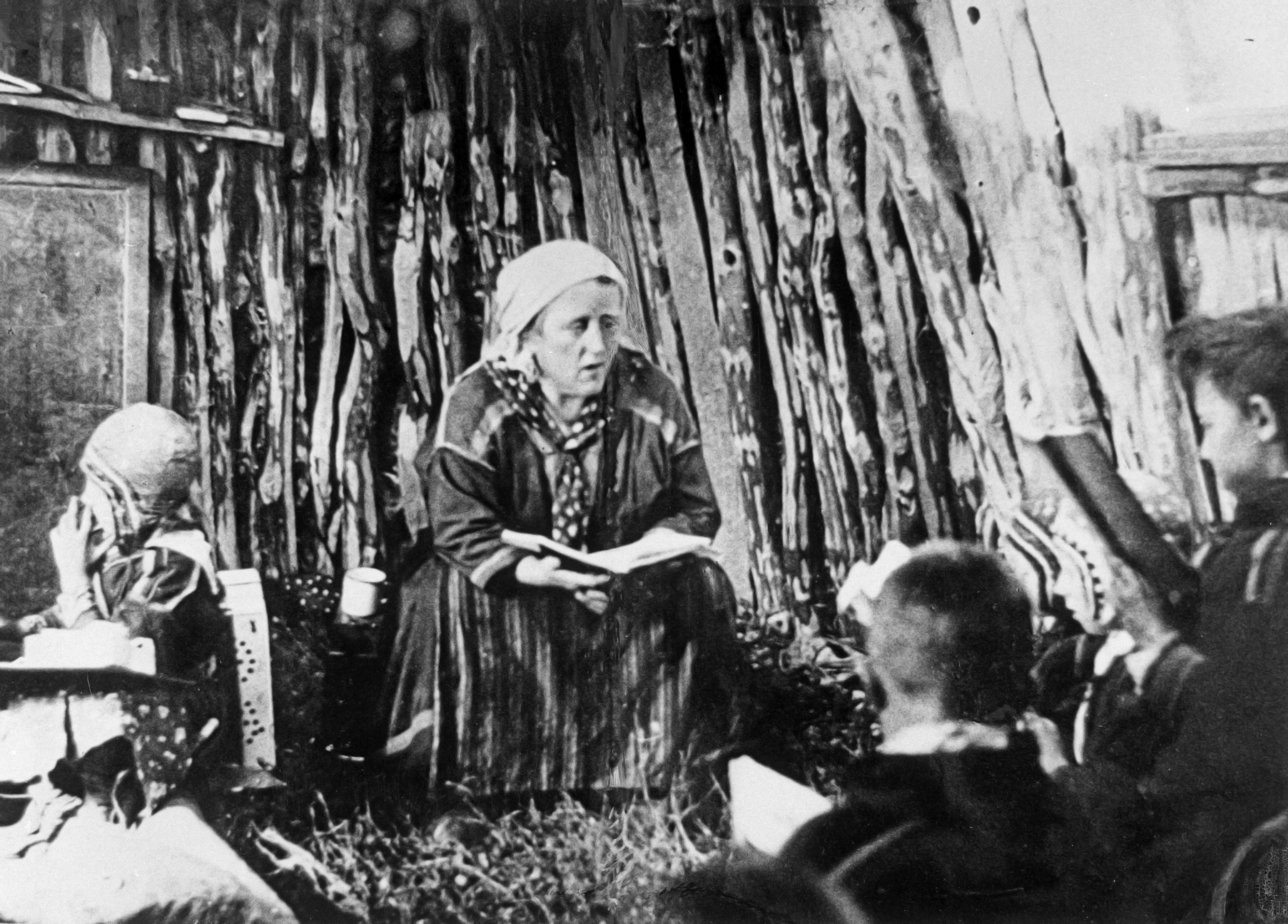