Gärda Svensson was one of the female pioneers of Bondeförbundet (the Farmers’ league) and was its first female parliamentarian. She was also involved in setting up Svenska Landsbygdens Kvinnoförbund (SLKF) (Swedish rural women’s federation) in 1932, for which she served as secretary from 1933–1936.

Gärda Svensson was born in Sibbarp, near Varberg, Halland, in 1895. She was the daughter of Sven Andersson, a farmer who was also a Bondeförbundet politician. Gärda Svensson enrolled at the Halland county women’s public college in Katrineberg when she turned 20. A few years later she married Daniel Svensson and then moved to Björnås farm in Ljungby. Her husband was also a farmer. During the 1920s they had three sons. Gärda Svensson’s husband was active within farming organisations and towards the end of the 1920s she too became involved in the folk movement.

Gärda Svensson and the author Märta Leijon were central figures within the Halland rural women’s organisation. A women’s section of Bondeförbundet was set up in Falkenberg in the spring of 1932, and the next year Svenska Landsbygdens Kvinnoförbund was established in Halmstad. The first chair to be appointed was Deri Höglund, whilst Gärda Svensson served as the organisation’s secretary.

Gärda Svensson’s involvement in creating SLKF was motivated by her desire to improve living standards for the Swedish rural population. During this time farming in Sweden was experiencing serious problems due to the rising costs and falling food prices which led to an international farming crisis. Gärda Svensson, who believed that rural housewives should be able to do more than just work in their kitchens or on the farm, also wanted to improve conditions for these women. For many years Gärda Svensson, as secretary of SLKF, ran the enterprise from within her home with very limited resources. Her confidence-inspiring personality was said to have encouraged many rural housewives to join the Halland section.

Before Gärda Svensson was elected to parliament she had served on Ljungby municipal council from 1938–1952. She was not only a Bondeförbundet representative within the welfare agency but she was also a member of the Halland county home help board and the maternity benefits agency. Further, she held posts within Bondeförbundet’s main organisation, serving as a member of the Bondeförbundet advisory board from 1937–1959, and whilst she was a parliamentarian she was elected onto the executive committee from 1958 onwards. Despite all this experience she hesitated before becoming a parliamentarian. When her name was included on the list of electoral candidates and she learned that she would replace another representative in the first chamber she wondered whether she was ready for the task. She was reluctant to be constantly on the move for long periods. Nevertheless, she took her seat in the first chamber in 1945 as a representative of Bondeförbundet, later known as Centerpartiet (the Centre Party) until 1963. During the initial stage of her parliamentary career she served as deputy on several special committees as well as other temporary committees dealing with welfare issues. She was also a deputy on the primary legislative committee and the ‘statsutskott’ (an obsolete budgetary committee). In 1949 she served as deputy on the secondary legislative committee, which dealt with welfare laws, becoming a full member of the same in 1952. She remained on that committee until her parliamentary career came to an end.

Gärda Svensson also served as deputy on the Bondeförbundet parliamentary advisory council, becoming a full member in 1952. She was one of few women to hold a position in this advisory council which was so important to the parties while parliament was a dual-chambered institution. Her membership of the advisory council enabled her to highlight the women’s association’s political concerns.

Gärda Svensson produced 122 motions during her parliamentary career. Two of the first motions she proposed in parliament involved increasing the number of provincial doctors and an enquiry into facilitating childcare for working women. Her motions were in the main focused on social welfare matters which impacted on women and children, and primarily with regard to living conditions among rural populations. She also submitted 17 interpellatios within the same policy sphere.

Gärda Svensson was a central figure within Svenska Landsbygdens Kvinnoförbund, not just as one of its founders but also as an organiser of the federation. She was also of great significance to Bondeförbundet and later Centerpartiet’s expansion within the sphere of social welfare. 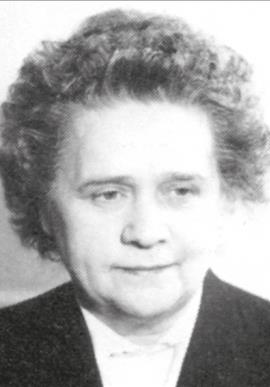