Gerda Ahlm was an artist and an art conservator. She emigrated to America and was considered there to be one of the best and most knowledgeable conservators.

Gerda Maria Ahlm was born in Västerås in 1869. She was the daughter of Augusta Ebba and Lars Vilhelm Ahlm. Her father was a chief accountant. Gerda Ahlm had two sisters and also two half-sisters and a half-brother from their father’s previous marriage. Gerda Ahlm was even as a child fascinated by art and old pictures, and she applied therefore to the Royal Swedish Academy of Fine Arts where she studied in 1889–1891.

After her studies, she made several journeys, first to Germany, Italy and France. In Paris she was given the opportunity of studying at the Académie Colarossi for Deschamps, and she got to know many other Scandinavian artists, among others Gerda Roosval-Kallstenius and Lotten Rönquist. The Scandinavians often gathered in the evenings at the Régence café and restaurant. Included in the group of acquaintances were also Fanny Låstbom and Ellen Thesleff, Aleksander Federley and Pekka Halonen from Finland. They participated in French cultural life and often visited museums and exhibitions.

1893 was the year of the World’s Columbian Exposition in Chicago and Gerda Ahlm participated there with the painting Eftersommar. She painted in oils and acrylic and her motifs were often poetic or dramatic landscapes and interiors. In 1894–1895, she travelled once again to France and Italy to study and also to England. In 1896, she attended the so-called Tallbergska course. Axel Tallberg was a graphic designer, painter and writer who had the previous year started an independent course in etching and relevant methods of engraving for the students at the Academy.

After having studied etching, Gerda Ahlm travelled to Norway in 1898 and to Belgium in 1900. When the Swedish artists’ association Svenska Konstnärernas Förening had its spring exhibition in 1901, the critic on the major daily newspaper Dagens Nyheter found that her “talent had not developed beyond the student stage” while his colleague on the other major daily newspaper Svenska Dagbladet praised her Belgian motifs as being “finely and sensitively treated colour-wise”. Sweden’s public art society, the aim of which was to engage and activate young artists by buying and raffling out their works, bought a couple of her interiors from the Netherlands.

Gerda Ahlm also painted and etched portraits of women, and participated in an international art exhibition in Munich. When the Svenska Konstnärernas Förening once again had an exhibition, Gerda Ahlm, Esther Kjerner and Hilma af Klint all received press acknowledgement that they were worth a mention among the younger artists. Gerda Ahlm was also an illustrator, and she contributed illustrations to “Den första och sista nattvardsgången” in De Ungas Tidning. She also illustrated Amy Palm’s book Borta eller hemma from 1907. Sven Österberg’s music publication Änglarna sjunger i himlen from as late as 1994 also includes illustrations by her.

In 1903, Gerda Ahlm packed her bags to emigrate to America where she settled in Chicago. She became more and more interested in art conservation. Through important contacts in Sweden and applications to the German government, Gerda Ahlm was given permission to study conservation with FC Sessig at Alte Pinakothek in Munich. Thanks to her previous studies and experiences, Gerda Ahlm was well equipped to receive the closely guarded secrets held by the profession. She later accepted many important assignments, among others that of restoring family portraits in the collection of the Swedish queen Victoria. Once back in America, she was given the appointment of assistant conservator at the Metropolitan Museum in New York. There she learned the art of cleaning and restoring etchings.

Gerda Ahlm found a challenge in a picture on roughly planed wood that was so badly damaged that it was impossible to see if it was a portrait or a landscape. After thorough work on it, the picture was shown to be a portrait painted by Albrecht Dürer: Madonna and Child. Her next great challenge was a painting by the Italian master Giovanni Bellini, contemporary with Dürer. These works rewarded Gerda Ahlm with an article in Fine Arts Journal in 1916, in which she was acknowledged as one of America’s most skilled conservators. She later worked as a conservator at the Art Institute of Chicago, as well as for other institutions and private collectors all over the world.

Parallel to her work as a conservator, Gerda Ahlm continued to paint and exhibit her own works. In some of them she was clearly inspired by impressionism. In her landscapes, water flows quiet and sparkling under the trees’ greenery and in her portraits of women, one can read both melancholy and wisdom. In 1905 and the years following, she exhibited her works at the Art Institute of Chicago. She was one of the first women to show her works at the Swedish-American art exhibitions in Chicago in 1905, 1911, and 1912. She also participated in exhibitions in Berlin, Dresden and Munich as well as in Copenhagen and Stockholm. After this period, she only sporadically showed her own works up until 1953. Today she is represented at the association Riksföreningen Sverigekontakt in Gothenburg, formerly the nationalistic Riksföreningen för svenskhetens bevarande i utlandet. 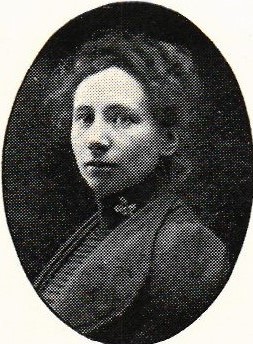