Gerda Brütte dedicated herself to home crafts in Kalmar County for half a century.With almost annual exhibitions in and outside the county, the introduction of employed designers and the development of an archive with photographs and woven goods, Kalmar County home crafts have been among the most distinguished in Sweden.

Gerda Brütte was born in 1886 in Tumbo in the province ofSödermanland where her father leased a farm. Her mother came from Arby south of Kalmar and her parents soon moved there. Gerda Brütte attended elementary school at Arbylund in 1895–1899, and already displayed ”very good diligence and very good behaviour”. At the turn of the century, the family moved to Kalmar and ran the farm Skanslyckan in Stora Dammgatan. Gerda Brütte attended various courses in home crafts techniques and bookkeeping.

In the summer of 1908, Gerda Brütte started a six week course of weaving at Kalmar Södra läns praktiska Väfskola. Her teacher was Anna Stenros. After the course, she recommended Gerda Brütte to Oda Berg, the manager at the Hushållningssällskapets Slöjdmagasin. Gerda Brütte was employed as an assistant there and as her first assignment she had to look after the newly started home crafts lottery. It was to provide money for the voluntary activities at the newly startedSödra Kalmar County home crafts association.

During the whole summer in 1909, Gerda Brütte was the hostess in the Småbrukarhemmet at the Stockholm Exhibition on Djurgården. AB Hem out in the country offered Slöjdmagasinet in Kalmar the opportunity of furnishing a small farm to show how an ordinary small farmer with family lived and resided. For four months, Gerda Brütte got to meet the pioneers of the home crafts movement. Since the turn of the century, home crafts associations had been formed in several counties and provinces.The interest in trying to save the home crafts legacy and pass it down was burning and it gave birth to thoughts about a national association. This probably contributed to the founding of the Svenska Hemslöjdsföreningarnas Riksförbund (SHR, now Hemslöjden) in 1912.

Home crafts in Kalmar opened a test weaving institute in 1910 led by the weaving teacher Anna Stenros. There old patterns were copied and new ones were created according to old textile traditions. At the institute, pupils interested in weaving were also taught. In order to improve her home crafts knowledge and skills, Gerda Brütte received a scholarship in 1911 to attend a course at Skansen and Nordiska museet in Stockholm. There she studied old crafts from Småland and made comparisons with crafts from other provinces. This material was processed along with material collected by the crafts agent in the villages around, and Home crafts prepared an exhibition at the Nisbethska school during the agricultural Lantbruksmötet in 1913 in Kalmar. There, beautiful furniture, baskets, bone crafts and woven goods were shown, and wool and flax spinning were demonstrated.

An event in Kalmar in home crafts history that received much attention was the Öland cottage at the Baltic exhibition in Malmö in 1914. This was a different method of exhibiting home crafts, since this cottage was an example of living culture. Gerda Brütte organised and managed the cottage with fishing-net decorations, sealskins, lures and a homemade gun to represent the men’s lives, and flax, double skirts and woven goods to represent the women’s work.

In May 1917, Gerda Brütte married Eric C:son Brütte, a friend from her youth. During the first years of the 1920s, the town architect J Fred Olson in cooperation with Eric and Gerda Brütte designed a house that was finally completed in 1922. The house had a very personal character with inspiration from among others the castle in Kalmar, as seen in the ceiling in the dining-room, bay windows and leaded windowpanes the length of one long wall. In the cellar stood partof the outer castle wall, and the house was therefore named Wallgården. Wallgården’s garden was widely known for its beauty.

Slöjdmagasinet, situated since 1877 at Larmgatan 26 with its own building, was amalgamated with the voluntary home crafts association 1921. After that, both the economical and voluntary activities were looked after by Södra Kalmar Läns Hemslöjdsförening. As the manager of the eminent Hemslöjden in Kalmar and with her good qualifications, Gerda Brütte was soon elected to the board of SHR, the Kalmar County antiquarian association and the national Hemslöjdsförbundet in Sweden.

A great exhibition that was also important for the documentation of crafts was the Kulturmässan in Kalmar in 1926. A thorough inventory of crafts in the county’s 86 parishes had been carried out by the crafts agents. Crafts were displayed in the gymnastics hall at Tullskolan. Lilli Zickerman, a legend in the crafts world, led the photographing and copying of textiles so that about 400 patterns were saved for the home crafts association’s archive and the Nordiska museet. The work of collecting for the home crafts archive gained impetus through this comprehensive addition.

Gerda Brütte was a person of great insight with a good, stable temperament, which made her an excellent manager. About 20-30 people were at work, what with weavers, assistants and textile artists, and out in the countryside up to 90 or so women weavers were working in their homes. It could be very hectic approaching Christmas and exhibitions, but Gerda Brütte always had time and a friendly word for everyone. Her staff were content and remained with her for a long time. Kalmar home crafts was the first such association in Sweden working with artists to design patterns, thanks to Gerda Brütte’s ideas and visions. Since the 1920s, they had woven typical Swedish carpets, the patterns of which were always composed by textile artists. For the Stockholm Exhibition in 1930, the carpets had been woven using artistic variations of older patterns.In the 1930s, the association hired its first full-time textile artist Ebba Swedenborg. For the world exhibition in Paris in 1937, Ebba Swedenborg had composed Isbjörnsmattan that had been selected to represent Sweden in a photo on the front of the exhibition catalogue.

The materials for the woven goods were mainly wool and flax from local farms. Gerda Brütte’s good contacts with the material producers in the county meant that home crafts were not that badly affected by material shortage during the second world war. However, to mitigate the shortage of yarn, home crafts provided suitable seed free of charge to encourage cultivation.Machines for scutching and willowing were purchased and a consultant helped with preparation.

Gerda Brütte was not only active in Home crafts but was also a member of the Swedish Women’s Voluntary Defence Organisation and the local Red Cross group. When a gathering of women founded the Kalmar Husmodersförening in 1939, Gerda Brütte was active from the first instant. It is evident in many ways that she was societally involved and promoted women’s interests. In the conservative party’s election propaganda in 1946 with the heading ”Women in the lead”, Mrs Gerda Brütte appears as one of eight faces.

When Gerda Brütte was going to look around her to find a successor, she settled on the textile artist Anna Maria Hoke who acceded to the post in 1956 and worked parallel with Gerda Brütte for a period. Gerda Brütte was widowed early on, in 1964 but she remained at Wallgården until the 1970s. In October 1978, Wallgården was sold and Gerda Bütte moved to Dahmska stiftelsen, where she lived until her death. As appreciated and valued for her work and her contribution to her special vocation as Gerda Brütte was, just as well-liked and valued was she personally, as a human being.

Gerda Bütte died in 1984. She is buried with her husband in the Southern Cemetery in Kalmar. 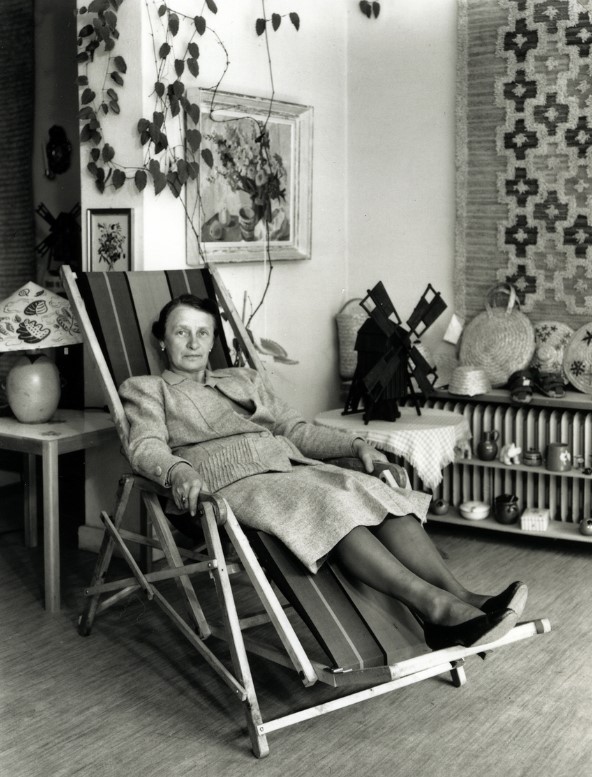