Gerda Höjer was one of Sweden’s foremost women trade union leaders during the 1900s. In the 1940s and 1950s above all she very successfully led the work of the nursing union Svensk sjuksköterskeförening in changing the “nursing vocation” into a profession.

Gerda Höjer was born in 1893 in Visby on the Baltic island of Gotland. She was the daughter of grammar school teacher Nils Höjer and his wife Emmy Bergman, a trained singer. Gerda was the fourth of eight children. Several of them were to achieve elevated positions in society. The oldest brother, Axel, was the director-general of the national medical board, Medicinalstyrelsen, and married to Signe Höjer. Sigrid Höjer was a nurse and the director of the home for the handicapped Vanföreanstalten Eugeniahemmet, later Norrbackainsitutet, in Stockholm. Karl Höjer was a social politician and for a period the acting director-general of the Socialstyrelsen, and Erik Höjer was the director-general of Domänverket. The network constituted by her siblings probably played a big role for Gerda Höjer in her work as a union leader and politician.

When Gerda Höjer was five, the family moved to Stockholm. After having matriculated from Åhlinska skolan in 1910, with tops marks, she trained at the childcare centre Sällskapet Barnavård in Stockholm and also attended a shorter housekeeping course. In 1914—1916 she was educated at the Red Cross nursing school (nowadays the Red Cross College, Röda Korsets högskola), and in 1919 she was employed as an x-ray nurse at the Maria hospital on Södermalm in Stockholm. She lived in nursing quarters at the hospital. In 1920—1921 she was on leave for studies at the London School of Economics, and in 1923 she participated in the Swedish nursing association’s advanced course. In 1927, she made a study trip to England, Belgium and Holland. She remained at Maria hospital until 1933, when she left active nursing and instead started a trade union career.

The Swedish nursing association (Svensk sjuksköterskeförening, SSF), founded as an association for interested amateurs in 1910, was restructured in 1933 into a trade union. Gerda Höjer had been engaged early on in the association, above all in their support fund for which she was a board member and secretary. In 1933 she was appointed full time as SSF’s first paid secretary. As such, she was to play a central role in the association’s transformation. In 1945, she was appointed as chairman of the association and also first ombudsman and negotiator. She was active as chairwoman of the SSF until 1960. In 1946 she became one of the first women to be elected as a proxy on the board of a national trade union (Tjänstemännens centralorganisation, TCO). The year after, she was made a board member, a post she held until 1961.

Under Gerda Höjer’s chairwomanship in 1945—1960, SSF expanded enormously, from about 9,600 members to over 27,000 members. One explanation for this expansion was the development of the Swedish healthcare system and the increasing need of nurses this involved. This fact was behind the parliamentary decision in 1951 to allow men to train to be nurses. Several important reforms of the profession and professional education were implemented during Gerda Höjer’s time as chairwoman, and the trade union successes were significant. The most important was the decision to introduce nursing registration in 1958. A trade union victory of another and more dramatic sort was attained in the negotiations for higher salaries in 1950—1951. Nurses did not have the right to go on strike, so they chose instead in the early summer of 1951 to use mass resignations as a weapon in the salary negotiations. Parliament was finally compelled to break off their summer holidays to come to a decision about a law on official duties that would use the threat of prison to force nurses back to work. At the last moment, an agreement was reached between the parts, and nurses had their salaries raised by two salary ranks, apart from a number of other benefits.

During the salary struggle, Gerda Höjer was a member of parliament. Between 1949 and 1960 she represented the liberal People's Party (Folkpartiet, FP) in the second chamber. Politically, she stood for a different perspective from her brothers Axel and Karl and her sister-in-law Signe, all of whom were active social democrats. In parliament, she was first and foremost engaged in health and healthcare issues such as the matter of equal pay for women and men, which she worked for in TCO. Before she was elected to parliament, she represented FP in the Stockholm municipality among other administrations, in 1939—1948. She was also a member of the Stockholm city hospital directorate, the St Erik nursing school and the central board of the Swedish Red Cross.

Gerda Höjer had an extensive international involvement within the framework of her chairwomanship of SSF, partly as a board member of the Nordic nurses’ collaboration (Sjuksköterskors Samarbete i Norden, SSN), and partly in the International Council of Nurses (ICN), that was and is the nurses’ global organisation, founded in 1899. Gerda Höjer was ICN’s chairwoman in 1947 —1953, and its vice chairwoman in 1953—1957. In 1949, she and SSF hosted the ICN fiftieth annual conference, that gathered together 3,700 nurses from the whole world in Stockholm. The organisation was almost in pieces after the second world war, but was rebuilt anew under Gerda Höjer’s chairwomanship. For her international contributions, she was awarded the Norwegian decoration Haakon VII’s Freedom Cross, Finland’s White Rose decoration and the Florence Nightingale medal, which is the most eminent international distinction that a nurse can receive.

Privately, Gerda Höjer shared her life with another nurse, Karin Elfverson, who was also active in SSF, among other things as responsible for SSF’s courses and as the association’s cashier and second vice chairwoman. Karin Elfverson was also, like Gerda Höjer, active in the SSN and ICN, as well as in various women’s organisations like for example the professional women’s association Yrkeskvinnors samarbetsförbund. From 1937 onwards, Gerda Höjer and Karin Elfverson shared a flat in the same building as SSF’s office at Östermalmsgatan 33. The work in SSF, like many others of their subsidiary involvements, filled most of their time.

After having left her assignments in SSF and parliament in 1960, Gerda Höjer spent much of her time writing a book about the nursing profession: Att vara sjuksköterska, published by Bonniers in 1964. Gerda Höjer died in 1974 in Norrbärke, Dalarna, and is buried in that congregation’s cemetery. 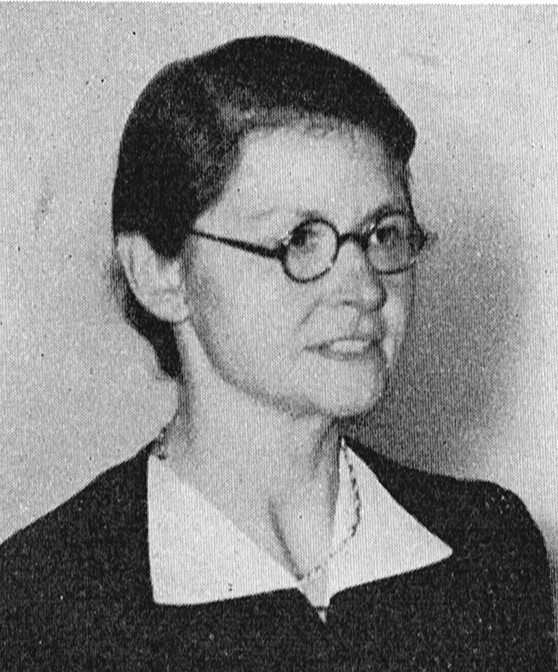