Gerda Meyerson was a philanthropist and pioneer within the sphere of social work. She established societies and housing and rest homes for working-class women. She was also an author and an opinion-former.

Gerda Meyerson and her twin sister Agda Meyerson were born in central Stockholm in 1866. They lived and worked in Stockholm. They came from a well-to-do Jewish business family which engaged in philanthropic activities. The sisters thus had experience and knowledge which served them well in the socio-political activism which characterised their adult lives. Gerda Meyerson studied social work in Germany, amongst other places, and trained as a professional inspector in Denmark, thereby supplying herself with further knowledge of the working-class women’s work environment and work conditions. Gerda Meyerson also made connections with working-class women through her family’s philanthropic activities. In 1894 she began holding so called gatherings and meetings with working-class women from the Kungsholmen factories. She became friendly with them and visited them in their homes, thereby gaining an insight into their housing situations and lifestyles. She saw first-hand how the young women were negatively impacted by the contemporary lodger system as many people were forced into renting small, overcrowded apartments.

Gerda Meyerson understood the strong connection between overcrowding and drunkenness and that young working-class women were particularly vulnerable. Thus, in 1898, she set up Föreningen Hem för arbeterskor (the society of housing for working-class women) and opened a home for young female workers at Kungsholmen. She opened another two homes in 1901 and 1909 which catered for 100 working women. There they could rent a furnished room at low cost and a library and common room where discussion evenings, socially-oriented talks, and practical courses were all held was also included. Gerda Meyerson herself participated in these meetings and socialised and enjoyed the company of her tenants.

In order to create a common space to bring societies and socially-interested people together Gerda Meyerson and Gertrud af Klintberg established the Centralförbundet för Socialt Arbete (CSA, central association for social work) in 1903. Gerda Meyerson was the association’s secretary until 1905, and a member of the board until 1921. She was also a member of the Christian women’s sobriety society Vita Bandet (the white ribbon), established in 1900, which grew into one of the largest women’s organisations in Sweden with local branches throughout the country.

Gerda Meyerson soon learned, through her contacts with working-class women, that married working-class women rarely got time to rest. Thus, in 1911, she opened Tallbacken, a rest home on Värmdö where Föreningen Hem för arbeterskor offered working-class women a few weeks’ rest and holidays for a token sum, or even gratis. Gerda Meyerson realised that just as rest was important to work and health so education and information were important for personal development and in order to solve social problems. When she became the head of the Vita Bandet activities for female factory workers in 1912 she framed the organisation’s local branch activities in a manner which encouraged activities that would give working-class women access to fellowship, education, and recreation as well as rest. She encouraged and inspired the local Vita Bandet branches to open their own rest homes and Tallbacken became a role-model and template for an extensive and long-lasting holiday enterprise within Vita Bandet.

Gerda Meyerson was presumably Jewish but she sympathised with Christian liberal life perspectives and saw herself as Christian, in practise, although she never converted. She openly declared her Christian beliefs in the 1908 pamphlet Världens ljus. Tankar om Jesus och hans lära: brev till en judisk väninna. She was a follower of the Christian preacher Natanael Beskow’s ‘hemgård’ (settlement) activities at Birkagården. That enterprise started in 1912 with a reading-room which then was expanded into a series of children’s and youth enterprises. Gerda Meyerson was on the board of the Birkagården Kindergarten.

Gerda Meyerson saw herself as a professional writer and she wrote children’s books, stories and plays for children’s and young people’s magazines, as well as a series of plays for young people. She also wrote poetry and other types of fiction. In 1890 she published her novel Flickor emellan, aimed at younger women, but otherwise her writing was characterised by her socio-political interest in women’s working and living conditions and she mainly wrote socio-political textbooks. Her social pathos and activism on behalf of the working-class woman’s situation is mirrored in her works such as the 1907 Våra arbeterskors ställning och medlen för att förbättra den, Kvinnor i industrin, from 1909, and the 1917 Arbeterskornas värld. These formed important contributions to the building of political opinions. In 1907, on behalf of Stockholms Dagblad, she undertook an enquiry into the industrial work women did from home and published her findings in Svenska hemarbetsförhållanden. She also arranged an exhibition in conjunction with the enquiry.

Above all Gerda Meyerson influenced public opinions through her many magazine articles and reports in the likes of Idun and the Fredrika-Bremer-Förbundet (association) journal Dagny, as well as the Centralförbundet för Socialt Arbete organ Social Tidskrift, from 1909–1917. She was also a pivotal opinion former through the articles she wrote for the eponymous Vita Bandet journal. She often wrote about housing and alcohol problems, on the poor work environments and working conditions that women endured as well as their need for rest and legally mandated holidays. From 1913–1916 she also served as editor of the Vita Bandet journal along with Emilie Rathou.

In 1921 Gerda Meyerson set up yet another society, Svenska Föreningen för Dövas Väl (the Swedish society for the benefit of the deaf). She herself suffered from impaired hearing and her own experiences and her network of philanthropic contacts both played a significant role in the enterprise which she ran from within her own home. She was secretary of the society in which she involved otologist as well as and teachers. The society offered an array of assistance to hearing impaired children as well as specialised teaching. She also set up a sewing studio to provide employment for deaf women.

During her lifetime Gerda Meyerson was described as a small slight woman with great pathos and a similarly great willpower. Her passion for socio-political issues made her a recognised philanthropist who was full of initiative, as well as a public educator, author, and opinion former. In 1916 she was awarded the royal Illis quorum medal in recognition of her socio-political contributions.

Gerda Meyerson died in Stockholm in 1929. She is buried in the Jewish cemetery at the Norra cemetery. 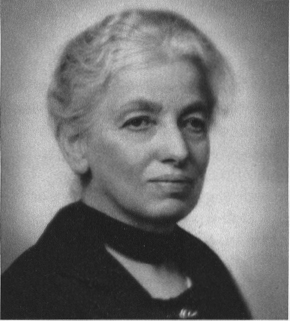