Gertrud af Klintberg was a central figure within early twentieth-century poor relief efforts. She was both a social worker and a politician active in social policies.

Gertrud af Klintberg was born in 1866. She was the eldest child in a family of ten girls and two boys. Her father, Ferdinand af Klintberg, hailed from Uppland, and her mother, Gertrud af Klintberg (née Bergman), came from Strängnäs. The couple settled in Stockholm, where all the children were born. In 1883 the family acquired Vretaberg farm beside lake Uttran, near Södertälje. The farm has remained in the family’s ownership since that time, often serving as a place of rest. Gertrud af Klintberg bore the same name as her mother – an active member of Fredrika-Bremer-Förbundet (FBF) – but was only ever known as Etty.

In 1889 Föreningen för Välgörenhetens Ordnande (FVO, association for the regulation of charity) was established. A few years later Agda Montelius became its director and thanks to her large female network she was able to recruit young women to work for the association without posing a financial drain on it. She knew Gertrud af Klintberg’s mother through Fredrika-Bremer-Förbundet and during a visit to the Klintberg family home Gertrud af Klintberg became enthralled by the FVO’s poor relief efforts. Her life thus not only took a new direction but FVO came to serve as an important base for her. It was thanks to FVO that she came to know Gerda Meyerson. Later on both of these women served on the board of FVO.

Gertrud af Klintberg undertook study tours in Europe from 1900 onwards to further her knowledge of poor relief work. In 1905 she became the director of FVO’s handicrafts section, remaining in charge of it until 1923. This section of the association put unemployed women to work producing various types of handicrafts for sale, which provided these women with a small income on which they could live. This was not Gertrud af Klintberg’s only involvement within FVO. She dealt with requests for assistance which came into the organisation from Katarina congregation. Further, she set up a register of organisations engaged in poor relief work, published in 1914, which was entitled F.V.O.: handbok för fattigvårdsintresserade.

Gerda Meyerson and Gertrud af Klintberg had already in 1902 approached the leaders of various organisations to discuss the need to coordinate philanthropic enterprises. This move is now considered to be the spark which led to the forming of Centralförbundet för Socialt Arbete (CSA, National Association of Social Work), established in 1903. Although these talks continued within FVO and elsewhere Gertrud af Klintberg was no longer involved when the actual organisation was formed. Svenska fattigvårdsförbundet (Swedish poor relief association) was born out of the CSA in 1906 and it was within this organisation – alongside her involvement in FVO – that Gertrud af Klintberg was mainly engaged.

Gertrud af Klintberg was concerned about the living conditions endured by women. Like her mother she decided to join FBF and then Landsföreningen för kvinnans politiska rösträtt (LKPR, National Association for Women’s Suffrage), as well as Svenska Kvinnornas Nationalförbund (National Council of Swedish Women). Along with Gerda Meyerson she joined Sällskapet Nya Idun, which had been established in 1885. Her mother had already joined in 1887 whilst Gertrud af Klintberg was elected into the society in 1906. When FBF expressed itself publicly on several occasions on poor relief issues it was Gertrud af Klintberg who served as the FBF spokesperson. From 1918 onwards she was a member of FBF’s board and steering committee and during the 1920s she was also on the board of FBF’s vocational school. Gertrud af Klintberg also had the opportunity to express her mind on various issues within Svenska fattigvårdsförbundet, doing so from a feminine perspective. In 1920 she wrote Kvinnan och samhället about the role of women within poor relief work and the need for tolerance and confidence that those in need wanted to help themselves, the dominant perspective within voluntary poor relief efforts.

Gertrud af Klintberg’s political activism began in 1905. Her first role devolved from her position as the first female member of Stockholms fattigvårdsnämnd (poor relief agency). Although women had previously been members of local poor relief boards Gertrud af Klintberg was now working for Stockholm’s overarching poor relief agency. She gradually came to hold several positions of authority, such as chair of the committee which organised food sales to the unemployed, serving as a board member of the workhouse Allmänna försörjningsinrättningen. From 1907 onwards she was a board member of Stockholm stads asyler för husvilla (city refuges for homeless families) and from 1920 she served as chair of the poor relief authority. At various times Stockholm city council appointed her to serve on Stockholm’s unemployment committee, albeit in 1927 she was excluded from serving due to being voted down by Social Democrat and Communist party members. Her own political allegiance was to the Liberals. She emphasised, in various contexts, the importance of order, organisation, and cooperation – keywords which were certainly vital to her own work. Further to her focus on poor relief she was also involved in the directorate of Sunnerdahl hemskolor (boarding schools for needy children).

During 1913 the pension question became a focal point following the Swedish Parliament’s proposal to set up a general pension, which was accepted despite great reservations from practically all women’s organisations who claimed that this pension proposal discriminated against women. At a major meeting held in January 1913, at which Gertrud af Klintberg delivered the final speech, a resolution was passed which heavily questioned the wording of the current parliamentary pensions proposal. Gertrud af Klintberg then served from 1914 onwards, as chair of the capital city’s pension agency. Svenska fattigvårdsförbundet was also harshly critical of the pension proposal but for other reasons than those voiced by women’s organisations. Further, Gertrud af Klintberg was politically active within the Liberal party and served on the board of Föreningen frisinnade kvinnor (FFK, later Frisinnade Kvinnors Riksförbund FKR, national association of Liberal party women). In 1912 she stood as a candidate for Stockholm city council although she was only elected in 1920, after which she remained in post for three years.

Gertrud af Klintberg played many roles within the poor relief agency. In 1922 her efforts received formal recognition when she was awarded the Illis quorum medal. That same year she took on somewhat of a new role within a new context, namely by serving as director of practical social welfare training offered at Socialpolitiska institutet (later Socialhögskolan) in Stockholm. This institution had been established in 1921 on the initiative of CSA – where Gertrud af Klintberg was already well-known. She tackled this role with great seriousness and sought to further her own expertise by undertaking a study tour to the USA in 1926 lasting several weeks. One of the places she visited was Greenwich House in New York, a so-called “settlement” establishment. Primarily, however, she studied how social work was organised and taught in the USA.

On her return to Sweden she continued her various social work engagements. However, within a year of coming home she fell ill with jaundice and then died in July 1927 at Ersta hospital. Gertrud af Klintbeg is buried at Norra begravningsplatsen (the Northern cemetery) in Solna. 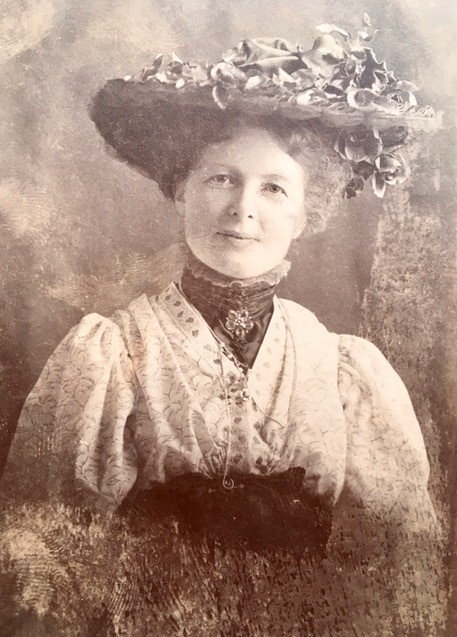