Gertrud Månsson was a Social Democratic party politician and one of the first women in Sweden to become a member of a city council. She was a feminist and campaigned for the improvement of living conditions of poor women and children.

Gertrud Månsson was born in 1866 on Kungsholmen in Stockholm. Her father was a railway worker and her mother was a housewife. Raised in basic conditions, Gertrud Månsson had to leave school and provide for herself by working as a servant when she was 11 years old. Her father died in 1882, followed by her mother in 1890, at which point her 18-year-old younger sister, Anna Maria, immigrated to America.

In 1896 Gertrud Månsson, together with her older sister Selma Månsson, set up a shop selling lamp oil and household goods at Upplandsgatan 39. There she became a neighbour of Agda Östlund, later one of the first two women to represent the Social Democratic party in parliament. The shop was sold in the early 1920s and Gertrud Månsson then worked as an office clerk for Systembolaget (the state alcohol monopoly) where she remained for the rest of her working life. Gertrud Månsson never married.

In 1892 Gertrud Månsson became politically active through the newly-established Social Democratic workers’ party. That same year she and her sister Selma participated in the founding of Stockholms allmänna kvinnoklubb (the women’s club of Stockholm), for which she served as chair for three periods: from 1893—1895, in 1897, and from 1906—1908. At various points she was also the chair of Kommittén för den kvinnliga agitationen (the committee for women’s agitation) and from 1899—1903 she was a member of the working committee of the Social Democratic women’s conference, which later transformed into Kvinnornas fackförbund (the women’s trade union).The aim of this union was to organise women working domestically or in industry, to campaign for humane economic conditions and shorter working hours as well as proper contracts. Within the union Gertrud Månsson worked alongside the likes of Anna Sterky, Kata Dalström, and Lotten Lundgren. The union was disbanded in 1909 when it was replaced by Landsorganisationen (LO: the national trade union) which took over the organising of women working in the textile industry.

In 1907 Gertrud Månsson joined the poor relief board of the Gustav Vasa congregation. In 1922 she became the chair of this agency. Gertrud Månsson was also appointed to the council of trust for the city’s information- and support office for those suffering from tuberculosis, the poor relief agency’s delegation for awarding support, and the foster placement bureau and child welfare agency. In 1912 she became a member of the board of Stockholm city’s correctional institute for girls. Her concern for women’s living conditions and health led her to join Kvinnornas andelsförening Svenska Hem (the women’s cooperative society Svenska Hem) which had been set up in 1905 by Anna Whitlock, amongst others.

In 1910 Gertrud Månsson made history. It had only just become legal, in the previous year, for women to be elected to city councils when she stood as a Social Democratic workers’ party candidate in Stockholm. Her extensive political experience resulted in her being chosen as a candidate and – according to Morgonbris – her election was a shoe-in. She thus became the first female member of a city council in Sweden. She was joined by Valfrid Palmgren, an academically qualified woman (with a Ph.D.) who was also a pioneer within the field of libraries and a member of Allmänna valmansförbundet (the general electoral league). The two women came from decidedly different backgrounds and endorsed different political parties, yet cooperated within the city council on several issues, such as matters relating to libraries and public education. In addition to all of the above, Gertrud Månsson was also active within the Gustav Vasa congregation public library. This was one of the more progressive libraries. She was personally interested in literature and corresponded with Kata Dalström on Gustaf Fröding and August Strindberg. Prior to the international women’s conference in Stockholm Valfrid Palmgren and Gertrud Månsson successfully petitioned for a financial contribution of 3,000 kronor to the conference from the city council.

Poor relief and housing issues were the matters closest to Gertrud Månsson’s heart and in 1912 she and a fellow party member put forward a motion requesting 500,000 kronor from a fund to construct housing for single poor women and their children.

In 1915 Gertrud Månsson was forced to give up re-election to the city council. Her political engagements had become extremely demanding and she did not have enough time or money to undertake them all. Additionally, at the end of that year she and her sister Selma were hit by a personal tragedy through the death of their younger brother. Gertrud Månsson did, however, retain several of her other municipal appointments and in 1919 she once again stood for election to the city council. She then remained on the council until 1931. Her contributions were largely made within the socio-political domain and always placed women and children at the centre.

Gertrud Månsson died on 30 December 1934, aged 68. She is buried at Norra begravningsplatsen in Solna. 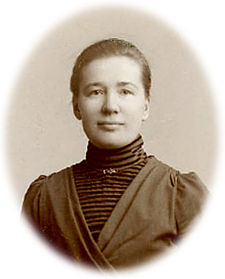