Gertrud Zachau was a pioneer who fought for the right of women to engage in competitive sports. She was also heavily involved in the women’s suffrage movement.

Gertrud Zachau was born in Vänersborg on 6 September 1872. Her father, Gustaf Tiodolf Svante Bergman, served as principal of a secondary school and was an author. Her mother, Ida Bergman née Mankell, was a suffragette and a member of several associations involved in supporting the rights of women and children. Gertrud Zachau had five siblings: three brothers and two sisters. Her sister Tyra Bergman became a qualified physical education instructor and later worked as a music teacher. She was one of the driving forces in the Sköldmön association and in the Uddevalla division of Föreningen för kvinnans politiska rösträtt (FKPR, association for female suffrage).

In 1892 Gertrud Zachau moved to Stockholm to study kinematics of gymnastics at Gymnastiska centralinstitutet (GCI; now the Swedish School of Sport and Health Sciences). She was actively engaged in the issue of clothing norms and questioned the rationale behind the restrictive nature of women’s clothing. She wrote in her diary that physical exercise and the ability to move freely were important to both sexes. The fact that social views condemned and prevented women from taking part in organised sports upset her. Gerturd Zachau qualified as a physical education instructor in 1894 and actively campaigned for the right of women to partake in sports and to be active in public. Just like her sister, Tyra Bergman, she became a driving force in the gymnastics association Sköldmön, and she was involved in organising several public competitions.

In 1895 Gertrud Zachau married Arthur Zachau, who had a match factory in Uddevalla. She undertook study trips visiting other factories, where she investigated the working environment and focused mainly on working conditions for female employees. As a result of her enquiries the match factory in Uddevalla adopted several changes in order to improve the working environment for all their employees. This included the provision of benefits, the building of improved workers’ accommodation, and extending maternity leave for women.

Gertrud Zachau settled in Uddevalla in 1895. She also had a summer cottage at Raneberg in Ljungskile, where she was a neighbour of Adota Nymann, who ran a women’s centre for suffragettes at her farm. Gertrud Zachau became heavily involved in the suffragette movement and became close friends with many of the suffragettes throughout Sweden and even further afield in Europe. These women included Gerda Planting-Gyllenbåga, Augusta Tonning, Lydia Wahlström, Eva Rodhe, Maya Nymann, and Valborg Thorburn.

In 1905 the Uddevalla branch of FKPR was set up and Gertrud Zachau was elected as chair. She was also on the central board of the organisation in Stockholm. She, along with Gertrud Planting-Gyllenbåga and Augusta Tonning, handed over signed petition lists to King Oscar II and the Prime Minister Arvid Lindman demanding women’s rights to political franchise. Gertrud Zachau and the Uddevalla collected 105 signatures, far exceeding the average of other towns, of five to ten signatures.

Gertrud Zachau continued campaigning for general and equal suffrage until it was finally achieved. In 1919 the Uddevalla branch of FKPR was dissolved. By that time Gertrud Zachau had been actively involved in the fight for equal rights for a period exceeding 30 years, since the age of 16.

Arthur Zachau died in 1928, leaving Gertrud Zachau widowed. During the 1930s she moved to Stockholm, where she remained until her death in 1953. She is buried in the Northern Cemetery in Uddevalla. 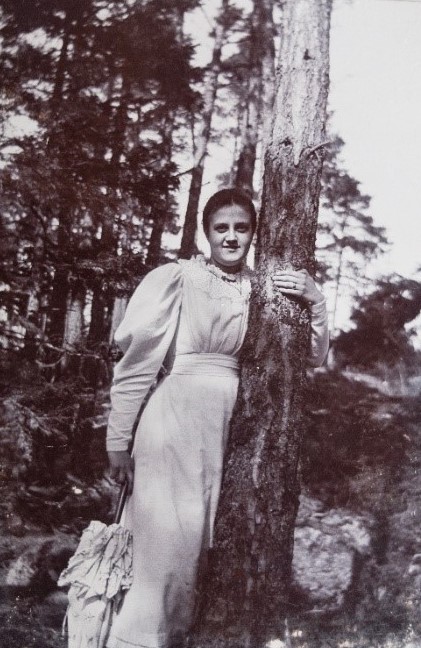