Görvel Fadersdotter Sparre (af Hjulsta och Ängsö) was an important person in the élite nobility of the late middle ages.

Görvel Fadersdotter Sparre (af Hjulsta och Ängsö) was born in 1517 on her father’s family estate Hjulsta in Enköpings-Näs parish in the province of Uppland. Her birth year appears in an epitaph over Peder Nilsson (Grip) in Sorunda church, paid for by herself. Her father, Fader Nilsson, was a circuit judge in Åsunda. He came from the family that later came to hold the title “Sparre af Hjulsta och Ängsö” after their coat of arms. Even though he himself did not attain any higher positions, the family belonged to the Swedish high-ranking nobility. This was emphasised through his marriage to Bodil Knutsdotter (Tre rosor), Görvel Fadersdotter’s mother. Since the Tre rosor family had roots in Norway, this is an example of the many cross-border marriages among the high-ranking nobility during the period of the union at the end of the middle ages.

Her first name was inherited by Görvel Fadersdotter from her maternal grandmother Görvel Eriksdotter (Gyllenstierna), who was married to privy councillor Knut Alfsson (Tre rosor). Both belonged to the highest-ranking nobility in the union, and from them Görvel Fadersdotter inherited a great deal of her fortune. Her Norwegian estates came from her mother’s side, while among others the Hjulsta estate came from her father’s. Her maternal grandparents came from families that were typical for the border-crossing élite nobility of the late medieval period. Many families acquired their estates in more than one of the three kingdoms in the union. Görvel Fadersdotter can in many ways be seen as the last of this group. She eventually lived on into the time when the development of national states made it harder and harder for foreigners to possess land in each respective country.

Görvel Fadersdotter was orphaned early in her life. On account of her extensive assets, she was an attractive marriage prospect. When she was only 15 years of age in 1532, she was married to Peder Nilsson (Grip), who was ten years older and who seems to have just been appointed privy councillor. The marriage was however brief and did not result in any children, since Peder Nilsson drowned in Lake Mälaren only a year later. Shortly afterwards, she married the much older Danish knight and privy councillor Truid Ulfstand.

At that time, Denmark was entering into a deep crisis, the so-called Count’s Feud, that is usually considered to be Denmark’s worst civil war. Many reasons for conflict coincided in time, but on one level it was all about who should take over the power in Denmark after the death of Fredrik I. As holder of the fortress in Varberg, Truid Ulfstand ended up in the centre of the conflict. After a coup at the fortress he had to flee in March 1535, but his wife, who was then pregnant, remained and was made a prisoner for 14 months. While a prisoner, she gave birth to their son Niels, who was to be Görvel Fadersdotter’s only child.

Efter Truid Ulfstand’s death in 1545, Görvel Fadersdotter soon got married again, this time to the knight and Danish privy councillor Lage (or Lave) Brahe. While the marriage to Truid Ulfstand has been described as unhappy, the relationship with Lage Brahe seems to have been happy. The personal feelings existing between spouses at this time are seldom possible to gain insight into, but there is a story that relates that Görvel Fadersdotter is supposed to have said that she would rather be in hell with Lord Lage (her third husband) than in heaven with Lord Truid (her second husband). Perhaps this story should not be taken too seriously, but that there were conflicts between Lage Brahe and Truid Ulfstand’s descendants becomes apparent from what happened when Görvel Fadersdotter’s and Truid Ulfstand’s son Niels was to be buried. Niels had died when he was only 13 years of age, in Landskrona in 1548, on his way back from a journey to Saxony with his stepfather Lage Brahe. Niels’ half-brothers, the sons of Truid Ulfstand in his first marriage, demanded that the coffin be opened, since they suspected that Lage Brahe had played some part in Niels’ death. It appeared however that he had died of the plague. One reason for the quarrel was, as so often, a dispute about inheritance. The conflict between Lage Brahe and Görvel Fadersdotter’s stepchildren became so comprehensive that the king had to compel them to a settlement. In 1551, she was forced by a decree to hand over Torup Castle in Skåne, only just completed, to her stepchildren.

Görvel Fadersdotter had inherited a large number of estates from her mother, and around 600 farms in Norway and on the Shetland Islands. Among her more unusual assets was a claim letter concerning a debt from Danzig, originating in a loan that Karl Knutsson (Bonde) on one occasion many years earlier had given to the town. As her marriage gift in her second marriage, Görvel Fadersdotter received estates in Halland which was then part of Denmark. Through inheritance and other marriage gifts, she already owned quite a number of estates in Sweden. It was however the Norwegian assets that were the core of the great wealth that made her one of the richest nobles at that time, even counting men. This also created a lot of problems, however.

The Norwegian estates have been thoroughly described by the Norwegian historian Ludvig Daae. According to him, her lands added up to about 610 named estates, “some of them large but mostly middle-sized”. Even though the average incomes from the estates did not amount to as much in Norway as in Sweden or Denmark, these were very extensive properties. Görvel Fadersdotter belonged without a doubt to the absolutely richest nobility in Norway — although she was resident abroad. Her estate stemmed to a great extent from the land that had once been owned by her maternal grandfather Knut Alfsson and his wife.

Görvel Fadersdotter also owned land in Sweden. It seems to have included more than 100 tenant farms in many provinces, in Götaland as well as Svealand. When it comes to these Swedish estates, they were confiscated during the Count’s Feud and also during and after the Nordic seven years’ war. After that, they were the objects of an inheritance dispute that she won, after which she kept these estates up until 1601 when she relinquished them to the Danish king.

After their son’s death, there was a dispute about the couple’s shared property and the inheritance after Truid Ulfstand. This resulted in Görvel Fadersdotter’s only being allowed to keep her marriage gift in Denmark. With her Norwegian estate she was considerably more successful. It was however very remote, and was desirable to many who asserted that they also had the right to parts of the estate. When she was widowed for the third time, it seems to have been more difficult for her to keep watch over her Norwegian interests. She therefore sought the protection of the Danish-Norwegian king, which resulted in her exchanging her estates in Norway on two occasions during the 1580s for estates in Denmark. She still owned many tenant farms in southern Norway, however. In the end, she bestowed these upon the crown as a gift, in 1599. A few years later, the rest of her Norwegian estate also ended up belonging to the Danish crown. This was done as an immediate gift, partly through her will and testament in which Görvel Fadersdotter appointed the king as her universal heir. She no longer had any children or other heirs, and the pressure on her concerning the coming inheritance was probably intense even while she was still alive. In that situation, to promise the estate to the Danish king seems to have been a good way of safeguarding her position until her death.

Görvel Fadersdotter often visited the court, especially during her widowhood, and in her will she also mentions that the king visited her home estate at Börringe Manor. Her experiences from the court were useful to her when she received young noblewomen who were allowed to stay at her home. The Danish nobleman Sivert Grubbe spoke of her when she was elderly as a person who had almost been a mother to him, and she is supposed to have shown great kindness to her servants. Even if these are words that we should take with a pinch of salt, they express very well the feminine ideal that was current for the women of the high-ranking nobility at that time.

Görvel Fadersdotter lived until she was very old, surviving all her husbands by many years. Lage Brahe died in 1567 and after that she lived for a further 38 years. After her death, there was a dispute about inheritance concerning her Swedish estates. It resulted eventually in their being taken over by the Swedish crown in 1607, and some years later, they were handed over to her distant Swedish heirs.

Görel Fadersdotter died in 1605 at her home at Börringe Manor in Skåne, almost 90 years of age. She is buried in Lund Cathedral, where we may still see her gravestone and her portrait on the wall of the north aisle. 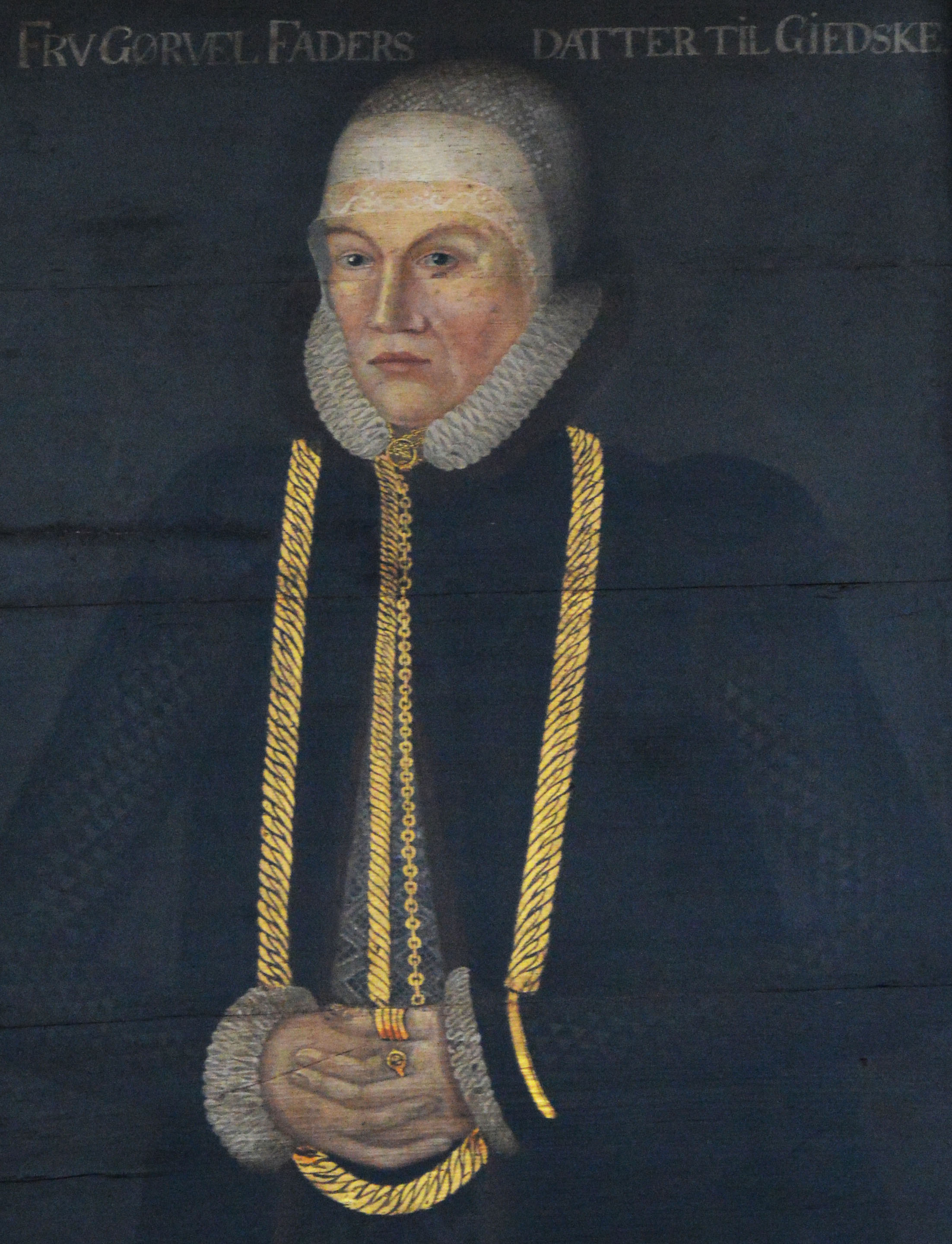