Göta Trägårdh was one of the most prominent Swedish textile designers and fashion designers.

Göta Trägårdh was born in Stockholm in 1904. She spent her earliest years living on Kungsholmen before the family moved to Bromma. Her father held a variety of jobs – he was a railway worker, a labourer, and a dairy foreman. Göta Trägårdh was the second child born into a family of six, of which four survived into adulthood. Her interest in art and fashion developed at an early stage and when she was 16 years old she began to attend the textile department at Tekniska skolan, now known as Konstfack (college of arts, crafts, and design). She then carried on to attend Konsthögskolan (the royal institute of art) and began to work as a fashion illustrator for various journals. She became one of the leading fashion illustrators of her day, known for her elegant and simplified style, supplying the likes of Svenska Dagbladet and Bonniers Veckotidning for many years. The architect Gunnar Asplund gave her a commission which proved to be very important for her career, which entailed designing the staff uniforms to be used at the 1930 Stockholm Exhibition.

Göta Trägårdh was married to the artist Björn Trägårdh for a few years during the 1930s. They had two children together, Jan Christer Trägårdh and Lena Trägårdh Eklund. Both of their children trained at Beckmans Skola för Reklam Illustration Mode (the Beckman school of advertising, illustration, and fashion) which Göta Trägårdh and Anders Beckman, the advertising illustrator, had founded in 1939. The school was based on the fundamental aim of generating close ties and cooperation with the working life and that the teachers should also be professionally active. The school comprised three departments: advertising, illustration, and fashion. From the school’s inception until her death in 1984 Göta Trägårdh served as headteacher of the fashion department. She taught pattern-making and fashion illustration. It was primarily following the end of the Second World War that the school became a centre of the new art of pattern-making and Göta Trägårdh recruited students from the school to work in the textile industry.

Swedish textile companies found it hard to import both patterns and cloth supplies during the war years which meant that they turned to domestic designers instead. By 1944 Göta Trägårdh was already working as a consultant and artistic advisor for Gefle Ångväveri Aktiebolag subcontracted to Jobs Handtryck in Leksand. Ten years later she became artistic director of Stockholms Bomullspinneri och Väfveri AB, later STOBO. The company was spread across different locations throughout the country. In 1948 the company acquired an entirely automated printing machine. When the cotton-spinning factory at Barnängen in Stockholm closed down in 1952 the company’s executive officer, Sven Ericsson, took the bold innovative step of relying on an artistically-created pattern production. Göta Trägårdh then turned to a former student at the Beckman school, Inez Svensson, to be her assistant and colleague. They produced several patterns themselves but also invited other textile designers, artists, and architects to submit patterns. STOBO quickly became a leading producer of exclusive, artistically created, printed interior furnishings materials. Despite the critical acclaim for the new pattern collections it seems conditions were not quite ready for the market and by 1964 STOBO had already closed down.

Göta Trägårdh then became the artistic director of Norrköpings Bomullsväveri AB Tuppen. Once again she formed ties with other designers including Inez Svensson. During the 1960s the textile industry underwent major overhauls. Göta Trägårdh then became the artistic director of both Gamlestadens Fabriker AB and Strömma Bomullspinneri AB. She remained active in those posts until 1975. She then worked freelance for Borås Wäfveri, for which she produced her final pattern in 1983. In addition to her professional work she also produced her own drawings and paintings and submitted work to several exhibitions.

Göta Trägårdh had a decisive influence on the success of Swedish pattern-making both at a national and an international level. With one foot in the training sphere and the other within the textile industry she was able to contribute to quality improvement and to innovations in printed pattern production. Through her role as teacher at the Anders Beckman school she made connections with both artistically talented students and career artists and designers and was able to involve them in those textile businesses in which she worked as artistic director. Her own output was extraordinarily extensive and from the 1950s until the early 1980s she designed about 100 patterns. These primarily took one of two forms: either patterns of a simple, but refined, graphic nature or stylised foliage in bold colour combinations. With the passage of time several of her own cloth designs have themselves become modern classics.

Göta Trägårdh died in 1984. She is buried at Bromma cemetery. 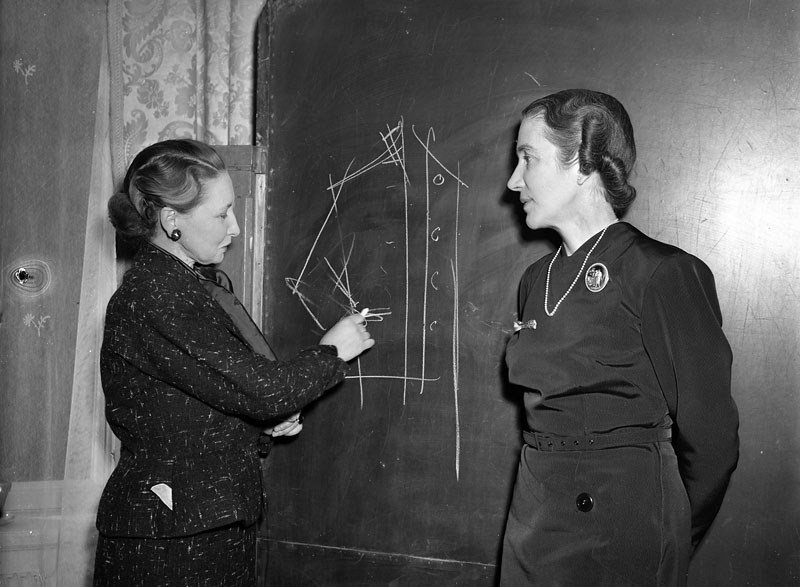