Greta Garbo was a working-class girl from Södermalm in Stockholm who became the most famous global film star during the 1920s and 1930s. She still remains an icon of the cinema in the 21st century.

Greta Garbo (originally Gustafsson) was the daughter of Karl Alfred, a binman, and his wife Anna. Both of her parents had moved from Småland to Stockholm at the turn of the 20th century. Greta Garbo was the third child, whose siblings included Sven and Alva, who also worked as actors. Her sister Alva died from cancer in 1926.

As a child Greta Garbo was a shy and imaginative daydreamer who became interested in the theatre at an early age and decided she wanted to become an actor. She attended Katarina södra folkskola (public school) in Stockholm for six years, and then – aged 13 – she began to work in order to contribute to the family income. She also cared for her father, whose health was failing and who eventually died of tuberculosis in 1920. Greta Garbo initially worked as an assistant at a few barbershops and the same year that her father died she got a job at PUB department store. At the latter she was a salesperson, but also got the chance to model for the company’s postal-order catalogue. She also appeared in three advertising films for PUB and Konsum. In the spring of 1922 she was accepted as a student at the Dramaten acting school, and that same summer she appeared in her first film as the bathing girl in the 1922 farce called Luffar-Petter, directed by Erik A. Petchler. That autumn she began training as an actor and also worked as a photographic model for Nordiska Kompaniet (NK).

In 1923 the film director, Mauritz Stiller, was seeking two young girls to play the parts of Elisabeth and Ebba Dohna in his film adaptation of Selma Lagerlöf’s novel Gösta Berlings saga. When he contacted his colleague, Gustaf Molander, who at that time was the manager of the Dramaten acting school, Molander recommended two of his students, namely Greta Garbo and Mona Mårtenson and they were both given the parts. Greta Garbo won recognition for her role as Elisabeth Dohna but initially did not generate a major response. Even Mauritz Stiller himself did not find anything particularly remarkable about Greta Garbo at the beginning. This soon changed when he realised her potential as a film star, given her soulful beauty and her photogenic qualities. Mauritz Stiller was convinced that he could turn Greta Garbo into an international film star. He took it upon himself to introduce modifications to her in such a way that she would realise her full potential. He turned the unrefined and lively young woman into a mysterious, oddly tired and experienced vamp, who was extremely attractive. It was during the recording of the Gösta Berling film that Greta Gustafsson – on the advice of her mentor, Mauritz Stiller – changed her surname to Garbo, as part of this transformation procedure.

After the success of the 1924 film Gösta Berlings saga, Mauritz Stiller and his young protégé were both approached by Metro-Goldwyn-Mayer (MGM). Whilst they were waiting for all the preparations for their trip to Hollywood to be made, they spent time in Berlin where Greta Garbo filmed a part in director G.W. Pabst’s 1925 film Die Freudlose Gasse. This development also played a part in Mauritz Stiller’s major plan to plot the course for Greta Garbo’s international career.

From the beginning Greta Garbo made the most of the image which Mauritz Stiller had created for her in films like The Torrent and The Temptress, both from 1926. The producer Irving Thalberg eventually replaced Mauritz Stiller’s role in Greta Garbo’s life. He had done her screen-tests and the results had captivated him. He then began to prepare the new actress by prescribing various beauty treatments and giving her English lessons. He gave her parts in elegant films where she portrayed exotic, sophisticated, world-weary, and cool women. In this way he kept adding to the myth that was Greta Garbo. After the success of the first film, The Torrent, Irving Thalberg continued to give her similar roles and from the next film onwards her name was always placed first in the credits.

The Garbo-character was altered and perfected later in her great breakthrough film, Flesh and the devil, and Love, both from 1927. In both films she acted opposite John Gilbert, and they became one of the era’s most famous film couples. Over the course of 1928 to 1929 she then made another six silent films, before the spoken film took over. This change ended many silent actors’ careers and it was with great trepidation that the mega star Greta Garbo decided to make the transition. She convinced her doubters and crossed over to spoken films in 1930 with Anna Christie. Her deep voice and Swedish-accented English proved no obstacle and instead increased her powers of attraction and charm over the cinema audiences. The film was simply marketed using the phrase “Garbo speaks!” and became all the rage. It was based on Eugene O’Neill’s prize-winning play and 15 minutes into it Greta Garbo expressed her famous first line: “Gimme a whiskey, ginger ale on the side, and don’t be stingy, baby”.

Two of Greta Garbo’s best-known roles followed this. In 1931 she played the title role as the First World War spy Mata Hari, and the next year she played a Russian ballerina in Grand Hotel, a multi-story film with an all-star cast. The film won an Oscar for best film. Greta Garbo is strongly connected to a line from the film, which placed very high in the American film institute’s 2005 vote for most memorable film quote ever: “I want to be alone; I just want to be alone”. The theme was somewhat of a recurring joke which had already begun during her silent-film career. That Greta Garbo was shy, did not enjoy large crowds, and preferred a reclusive life was something with MGM came to capitalise on given that it strengthened her image as a silent and mysterious woman whose charisma, inaccessibility, and melancholy nature only benefited their advertising.

Further to Grand Hotel she made another 13 spoken films between the years 1930 and 1941, before Hollywood stopped finding Greta Garbo interesting enough to film and her contract was dissolved. During the latter half of the 1930s Greta Garbo’s popularity was still widespread across Europe but in America the public had begun to tire of her exaggeratedly tragedy-tinged artistry and of the historical and melodrama-type films she acted in. This was the reason why she was chosen for the comedy Ninotchka, directed by Ernst Lubitsch, and subsequently in Two-faced woman, from 1941. The former was launched using the moto: “Garbo laughs!”.

Greta Garbo was nominated four times for an Oscar for best actress – for the films Anna Christie, and Romance, both 1930, and Camille, from 1936, and Ninotchka, from 1939. It was not, however, until 1955 that she received an honorary Oscar “for her unforgettable film appearances”. She refused to attend the gala to receive the prize. She was keen to leave Hollywood behind, and many years later she claimed that Ninotchka was her best film. It has since became a classic. Camille and Queen Christina, from 1933, have long been audience favourites, although the latter generated criticism in Sweden for its relaxed attitude toward Swedish history. Her part as the courtesan Marguerite who was condemned to death in Camille is considered to be one of her best performances.

Having made 28 films over the course of 16 years – including the fiasco of Two-faced woman – Greta Garbo retired, aged only 36. Initially she had not intended that this would be the end of her career, and she was still offered roles during the 1940s, but for various reasons nothing came of these offers. Either Greta Garbo did not want to perform or the project involved petered out for other reasons. Sten Broman’s biography of the film star includes her opinion on the matter: “Noone seems to understand that I was tired of everything that Hollywood stood for. I was never a real actress, I could never appear on a stage”. She wanted another kind of life, beyond the spotlights, and felt an aversion to and boredom with filming. She played the role of Garbo for a while and then returned to trying to live as Greta. As an actor she had a particular aura, but was no more technically skilled than her contemporary actors, and further she struggled with her lifelong sadness.

Amongst Greta Garbo’s many relationships perhaps the one with John Gilbert is best known, including the fact that he proposed to her and was rejected. Greta Garbo remained unmarried and rigorously protected her private life. At the start of the Second World War Greta Garbo brought her mother and brother across to America. Her mother died in 1944, and her brother died in 1967. Greta Garbo settled in New York and became an American citizen in 1951. A few years later she moved into a large apartment on the East River, where she remained until her death.

The epithet ‘the divine’ with regard to Greta Garbo was already coined in 1930 in a German biography written. Greta Garbo became an almost transcendent phenomenon which was transformed into a myth during her lifetime. An elevated, mysterious, and doomed tragedienne. In 1937 Greta Garbo was awarded the Litteris et Artibus medal and in 1960 she was honoured with a star on the Hollywood Walk of Fame. Greta Garbo was ranked the fifth biggest Hollywood actress of all time by the American Film Institute in 1999. She has a museum dedicated to her in the Småland town of Högsby, whilst there is a square in Södermalm in Stockholm named after her. Since 2016 she has figured on the Swedish 100 kronor note.

Greta Garbo died in New York in 1990. She was finally buried in 1999 at The Woodland Cemetery in Stockholm. 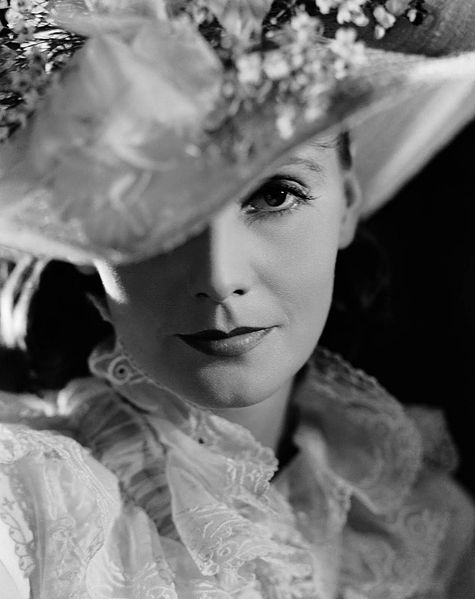