Greta Hedin was a teacher and literature historian and also active in the women’s movement.

Greta Hedin was born in Gothenburg on 21 March 1889, the daughter of Emelie Hedin, née Jacobsen and Anders Peter Hedin, a postmaster in Gothenburg at the end of the 1800s, an important assignment.

The Gothenburg higher secondary school for girls was administratively and premises-wise part of Sigrid Rudebeck’s school for girls, founded in 1869 by Sigrid Rudebeck. This school was one of several examples of schools for girls that were started in the 1800s on the initiative of women teachers who were entrepreneurs in the field of education. When Greta Hedin started at the Gothenburg higher secondary school for girls, Alfrida (Frida) Hjertberg had just been appointed as the school’s headmistress. She was to become one of the first two women to take their place in the Gothenburg City Council in 1911 after the first municipal election in which women were permitted to stand as candidates.

There is much to suggest that the Gothenburg higher secondary school was a stimulating environment for young girls. In 1908, Greta Hedin passed her so-called maturity examination, after both written and oral tests. In the autumn, she started her academic studies at Uppsala University. The number of women students was very small and most of them attended the faculty of arts. Greta Hedin studied the history of literature with art and aesthetics as well as English.

In 1912, Greta Hedin gained her M.A., an examination introduced in 1907 and intended mainly for future grammar school teachers. However, that market for women M.A. graduates was very limited, since according to a law from 1809, no women were allowed to hold a higher state appointment, and the grammar schools were state schools. This law was one reason why a number of women with academic qualifications took the initiative in 1904 to starting the women academics’ association Akademiskt bildade kvinnors förening (ABKF), now Kvinnliga Akademikers Förening. Greta Hedin was a very active member.

Greta Hedin was lucky enough after gaining her M.A. to be given a temporary appointment at Sigrid Rudebeck’s girls’ school, her old school in central Gothenburg, that under the leadership of Frida Hjertberg grew very fast during the 1910s and 1920s. After four years in Uppsala, Greta Hedin was thus back in Gothenburg, where she lived and worked until her death, mainly as a teacher for girls in English and Swedish, the latter including Swedish literature and history of literature. However, besides her paid work, she was also active in a number of other fields.

She registered at Gothenburg College, later the University of Gothenburg, to study for her licentiate in literature history. Parallel to her teaching appointment at the girls’ school, she spent more than ten years under the tutorship of Professor Otto Sylvan carrying out studies and research in literature history with her special orientation Gothicism and not least authors like Gustaf Geijer, Esaias Tegnér och Carl Jonas Love Almqvist. Apart from her studies, research and teaching, she was engaged in the ABKF and tried as early as in 1917 to found a local branch in Gothenburg. That turned out to be harder than she had imagined. It was only in 1933 that the west-Swedish branch of the ABKF was established, with Greta Hedin as chairwoman. During the 1930s and 1940s, she took on ever greater assignments on the national board, first as vice chairwoman in 1942 and from 1944 until her death as chairwoman.

Greta Hedin also joined the liberal women’s association Föreningen för Frisinnade kvinnor, just when the discussion on women’s political suffrage in the second chamber was at its most intensive. The association was a true campaign organisation for women’s suffrage and for women’s right to election to the Swedish parliament. In the association, Greta Hedin cooperated on a national level for many years with Kerstin Hesselgren and Annastina Alkman.

In 1928, Greta Hedin took her doctorate with the thesis Manhemsförbundet – ett bidrag till göticismen och den yngre romantiken, and the following year she was appointed as a senior lecturer. For a long time, she was the only woman senior lecturer at Gothenburg College. However, she did not make an academic career. She continued her teaching work at Rudebeck’s girls’ school, while in 1930–1934 she also acted as the head of studies, in practice the principal, at the Gothenburg grammar school for girls.

In 1933, Greta Hedin was appointed as a lecturer at the girls’ grammar school Högre allmänna läroverket för flickor, generally called Flickläroverket, that had started in 1929 after a decision by the Gothenburg City Council. In 1935 it moved to a new building near the main cultural centre in Gothenburg: Götaplatsen. There Greta Hedin worked as a lecturer until her death – often as the only woman lecturer.

Based on her thesis, Greta Hedin published several books intended to inspire teachers of the Swedish language. The first was Tegnérs Fritiofs saga, written with her tutor Professor Otto Sylvan, with commentaries for teachers on the text. Little more than a decade later, she published a book on Erik Gustaf Geijer: Arvet från Geijer – en bild av Erik Gustaf Geijer. In both these books, Greta Hedin combines her research on Geijer and Tegnér with her experiences as a Swedish language teacher. As a pedagogue, Greta Hedin was also very interested in the school systems in England and France. A bursary from the major daily newspaper Svenska Dagbladet in 1938 enabled her to study English and French schools. By assignment of the 1940 school inquiry, she collected material on the English school system in 1942–1943, in the middle of the war. It resulted in the book England spelar upp, published in 1944.

As well as her teaching and her authorship of various pamphlets, Greta Hedin was involved more and more in the association Föreningen för Frisinnade kvinnor and was the chairwoman of the Gothenburg branch in 1934–1945. She was clearly ideologically interested and the Nazi currents of the 1930s horrified her. Thus she was one of many in liberal circles in Gothenburg who were inspired by Torgny Segerstedt, editor in chief of Göteborgs Handels- och Sjöfarts-Tidning, in which he explicitly expressed his belief in the freedom of the individual.

In 1934, the liberal party Folkpartiet was founded, and during the years 1937–1948, Greta Hedin was its vice chairperson in Gothenburg. This meant that she was important both in the women’s organisation and in the party as a whole. With great ideological engagement and several important assignments in the internal party organisation, it would have been natural for her to stand for the election to the city council or parliament. Her name was on the ballot papers several times, but never in a position for election, and she was therefore never elected. Practical politics do not seem to have interested her. On the other hand, she was active in the liberal members’ organisation at a time when the liberal party was growing strong in Gothenburg. In 1948, she was able to experience how Brita Elmén was elected to the second chamber as the first liberal party woman from Gothenburg.

Greta Hedin remained unmarried. Her life must to a great extent have consisted of work: in schools and various organisations. Apart from work and positions of trust, she had time to contribute to magazines, among others Nordens frihet, and to publish her own pamphlets. After the war, she produced for example an introduction to the newly founded United Nations. She was eagerly occupied with an extensive work on the English poet William Wordsworth when she died. This book: Natur och kultur hos den unge Wordsworth appeared two years after her death. According to the liberal party member and literary scholar Allan Sjöding, who has written about Greta Hedin in Svenskt Biografiskt lexikon, she was “loyal and helpful” and ever since her grammar school years interested in liberal ideology. 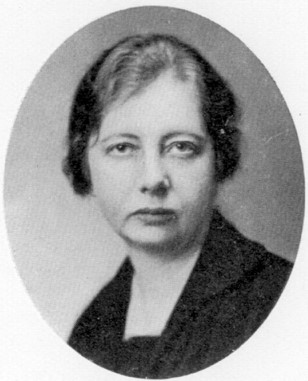