Greta Johansson was the first woman to win an Olympic gold medal for Sweden. She won the high dive event in Stockholm in 1912.

Greta Johansson was born in Stockholm in 1895. Her father was a miller and a doorman. She studied at Klara public school in central Stockholm. She got her first swimming ticket for the Strömbad in 1905 through the school. She was then ten years old. This meant she became part of the swimming-school enterprise run by the Stockholms Kappsimningsklubb (SKK). Her first instructor was Lisa Regnell, whom she would later come up against in the Olympic final. Greta Johansson won her first competition in 1908.

Greta Johansson initially displayed an ability for ordinary swimming. As a 15-year old she won her first Swedish championship in 1910 in the 100 meter freestyle, and this was followed up by a new Swedish championship insignia in the following years. On two occasions she beat the Swedish record for that distance. Subsequently she transferred her focus to diving. She won the 1911 Swedish championship straight dive event and repeated this success the following year. Both the women’s freestyle swimming and diving first appeared as events in the Swedish championship in 1910. This was a consequence of the International Olympic Committee (IOC) deciding that women’s swimming should be added to the Olympic programme in 1912, including both of the aforementioned events as well as a relay event. Greta Johansson later noted the lack of trainers for these particular events as well as for the relay race. Some training was available for women in Stockholm during the years leading up to the Olympic games, including at the Mälarbad swimming pool. Emil Lundberg, who was associated with SKK, led the training sessions.

Greta Johansson was 17 years old when she competed in the 1912 Stockholm Olympics. She entered three events. She competed against several Swedes in the 100 meter freestyle and they were all knocked out in their first attempt. Greta Johansson was also part of the 4x100 meter Swedish relay team. Only four teams entered the event and Sweden finished in fourth place. Greta Johansson’s greatest triumph was in the high dive. The final starting lineup comprised 13 competitors, 12 of which were Swedish. As John Lönnegren has written in the contemporary book Den Femte Olympiaden, Greta Johansson “excelled herself as usual with her beautiful style and excellent body position”. All the judges awarded her first place and her success was masterful. According to Erik Bergvall, in the book Olympiska Spelen 1912, “With regard to elegance and eye-catching travel through the air, no-one surpassed Greta Johansson, she exceeded all of her competitors in her Olympic triumph.” Lisa Regnell, Greta Johansson’s former trainer, won the silver medal.

Greta Johansson’s competitive career was a brief one. She met fellow diver Ernst Brandsten in Stockholm, who after a short stay in the USA had returned home and was competing for SK Neptun. They became a couple. In 1913 they emigrated and made their way to the USA, drawn by their colleague and 1908 Olympic medallist Arvid “Sparven” Spångberg, who had been working in America as a swimming coach for the New York Athletic Club since 1910. The Brandsten-Johansson couple settled in Palo Alto, just outside San Francisco. Ernst Brandsten, with the support of his wife, became an instructor and main diving coach at Stanford university. In a few years’ time Ernst Brandsten and Greta Johansson turned the USA into world-leaders with regard to diving. Ernst Brandsten served as the coach for the winning US male divers at several Olympic games from 1920 onwards. He is often regarded by historians as “the father of American diving”. When Greta Johansson became the first woman elected into the International Swimming Hall of Fame in 1973 it was in recognition of the extraordinary contribution that she and her husband had made for American swimming. 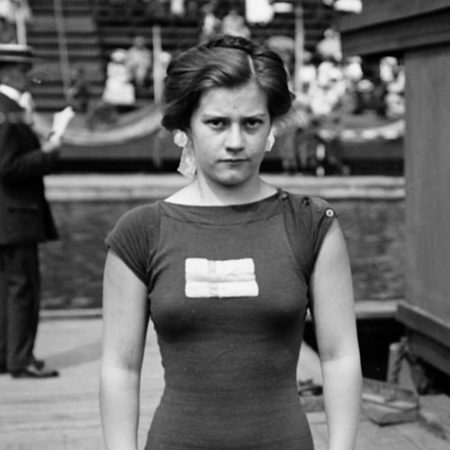