Greta Linder was a librarian who was also the first woman appointed to work as a library manager. She was also a well-loved teacher, lecturer, and writer who was an activist for librarians’ union rights.

Greta Linder was born in 1888. She was the eldest daughter of Nils and Gurli Linder. She had two sisters, Estrid and Tyra. Their mother was a well-known writer, journalist, and reviewer of children’s literature, primarily for Svenska Dagbladet. Their father was a lecturer, editor of reference works, and a member of parliament. He was 30 years older than his wife and had been her teacher at Högre lärarinneseminariet (advanced teacher-training seminar). This significant age difference eventually took its toll on their marriage and after a few happy years together they separated. Gurli Linder took a decision, which at that time was unusual, to leave her home due to the marital strife. She lost custody of her daughters during the divorce proceedings. Greta and her sisters were only able to visit their mother on isolated occasions. A few years later Nils Linder fell ill and died, at which point Gurli regained custody of her daughters. The girls subsequently found it hard to reconcile themselves with their new home life. These fractious family developments appear to have had lasting impacts on the three girls. All of them gained qualifications and became independent career women. None of them ever married. In reverential manner they maintained their mother’s home as a meeting-place for librarians, writers, and artists.

Greta Linder studied at the Almquist co-educational school, which was one of the most modern schools at that time, and gained her school-leaving certificate there in 1907. She intended to become a teacher and thus read literature, Nordic languages, English, and German at Uppsala university. Her open nature and facility for making friends naturally led her to embrace female student union life, including becoming a member of Kvinnliga Studentföreningen (the association of women students). In 1911 she gained her Master of Arts. In order to improve her language skills she spent the spring of 1912 in England, intending to subsequently seek a supply-teacher’s post.

During Valfrid Palmgren’s major enquiry into libraries in 1911 she proposed that a library agency complete with library managers be set up, to facilitate sharing out the suggested increases in state contributions to public libraries, the compilation of a model library catalogue, and to generally contribute to the development of public libraries. The enquiry resulted in a parliamentary proposal being put forward in 1912. Fredrik Hjelmqvist and Knut Tynell from Lund university library were appointed as library managers. It was Gurli Linder who informed her daughter Greta Linder that an assistant was being sought for the planned library agency. Greta Linder successfully applied for the post.

The library agency began its operations in early 1913 under the name of Bibliotekskonsulenterna. Greta Linder spent the majority of her working life with the organisation, initially as an assistant and, subsequently from 1929, as a library executive. At the beginning the agency formed part of Ecklesiastikdepartementet (the ministry of education) but later became comprised within Skolöverstyrelsen (the national agency for education). Greta Linder was awarded a stipend in 1915 to spend a year at The Library School of The New York Public Library in order to train and undertake study visits to American public libraries. She finished her travels by spending time in Denmark where she gained solid knowledge of the state of the Danish libraries and formed a network of Danish colleagues with whom she maintained a connection.

Greta Linder’s and her fellow library managers’ first major task involved setting up a basic catalogue to support libraries in their acquisition processes and from which the books which they acquired through state subsidies were to be chosen. This task entailed visits across the country to libraries which applied for the state subsidy. Other tasks in which these library managers played driving roles and which became significant for the development of the early public libraries included the setting up of Sveriges Allmänna Biblioteksförening (SAB) (national general library association) in 1915, creating a classification system known as the SAB system in 1921, and national rules of cataloguing in 1934. For many years Greta Linder was a member of the SAB catalogue committee and her 1938 publication entitled Katalogregler i sammandrag was continually released in new editions for over 20 years. She was part of the committee which prepared the building of the Stockholms stadsbibliotek (city library) where she subsequently worked, from 1925–1929, along with other librarians, acquiring the circa 200,000 volumes which were initially required. Stockholms stadsbibliotek was inaugurated in 1928.

One of Greta Linder’s major interests was travel and it was due to her conviction that librarians should travel in order to gain inspiration and new perspectives that the Greta Linder resestipendiefond (travel stipend fund) was set up when she retired. The fund was managed by Svenska folkbibliotekarieförbundet (public librarian association) (SFF, later DIK). The fund has allowed many librarians to broaden their experiences and form new contacts by undertaking foreign travel.

Intra Nordic library collaboration during the first half of the 1900s was particularly intensive. The annual general meetings of various library associations served as obvious opportunities for people to meet. Courses, conferences and study trips were all on offer. Since her study trip in 1916 Greta Linder had maintained good relations with the leading Danish librarians and had made several return visits to Denmark. For many years she was in close contact with the dynamic and charismatic Danish director of libraries and member of the parliamentary opposition Thomas Døssing. She also dedicated a loving obituary to him in 1954 in which she provided a vivid impression of Døssing’s exuberant personality. She also testified to the major influence that his inspirational and encouraging attitude towards library staff and politicians during inspection tours in Denmark had had on her own work in Sweden.

Greta Linder’s greatest interest lay in training opportunities. Correspondence courses were set up for staff at smaller libraries. No regular librarianship school for librarians existed as yet so librarians were trained internally. There was a distinct lack of librarians before Stockholms stadsbibliotek was inaugurated and in 1926 the first major librarianship course ran under very simple conditions. Greta Linder then worked – right up until she retired – as an ambitious and engaged teacher at the librarianship school, Statens biblioteksskola, which eventually became an established institution. For thirty years she played a role in training nearly every Swedish librarian. She also ran summer-courses and correspondence-courses to accommodate a variety of levels of library staff.

Training matters also served as the subject of many of Greta Linder’s articles and essays that she wrote for the SAB series of publications, in various journals, and in other contexts. She wrote about librarianship as a career, on salary matters, on working conditions, and the demands of the profession, but she also wrote about issues such as libraries for young people and their reading material, hospital libraries, ‘library advertising’, and on the preparatory work for Stockholm stadsbibliotek. Her writing style tended to be lively and fast-paced. Her humorous essay from 1961 entitled ‘När vi började – minnen från bibliotekskonsulenternas första år’, which was published in Idéer och resultat – nordiska biblioteksuppsatser tillägnade Ingeborg Heintze, is particularly well-known.

Greta Linder was an outward-looking person who had a large circle of friends. She maintained an extensive correspondence which has been donated to Kungliga biblioteket (the royal library) and comprises more than 4,000 letters. She maintained a lifelong friendship with Valfrid Palmgren, a pioneer of librarianship. She was an active member of Frisinnade Kvinnor (later Svenska Kvinnors Vänsterförbund, SKV) (left-wing party women’s association) and of Yrkeskvinnors riksförbund (national association of career women), which was a natural result of her deep interest in women’s career choices.

Greta Linder died in Stockholm in 1963. She is buried at the Norra cemetery in Solna. 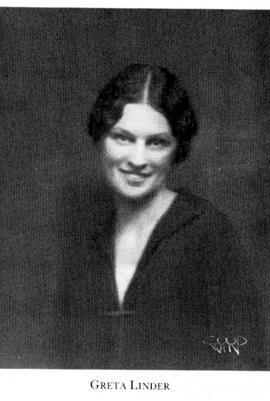