Greta Magnusson Grossman was a successful designer and architect who had her own business, based in Stockholm in the 1930s and subsequently in California after the Second World War.

Greta Magnusson Grossman grew up in Helsingborg, the only child of Johan and Tilda Magnusson. Her mother was a housewife and her father ran Bageriföreningen Garanti (a bakery association). Her parents encouraged her to develop her artistic talents. She graduated from Ebba Lundberg’s private high school for girls in 1926 with top marks in drawing. She then became an apprentice at Kärnan carpenters’ in order to learn how to make furniture. Her goal was to become a furniture designer at Högre konstindustriella skolan (University College of Arts, Crafts and Design) in Stockholm. She graduated in 1931 and thus became a pioneer among educated female furniture designers in Sweden. Greta Magnusson Grossman also studied architecture at Kungliga Tekniska Högskolan (Royal Institute of Technology) from 1939 to 1940. In 1933 she married the Englishman and musical director Billy Grossman. They lived at the then newly-built Gärdet in Stockholm, and Greta Magnusson Grossman jokingly described it as the ideal lifestyle as their different working hours meant that they never had the chance to tire of each other.

It was difficult to break into the labour market as a newly graduated female furniture designer in the early 1930s. Greta Magnusson Grossman briefly worked for Harald Westerberg. Boosted by winning the second prize in Hantverksförenings (the handicraft association’s) furniture competition in 1933, and with her husband’s support, Greta Magnusson Grossman opened her own furniture shop called “Studio” in Stockholm. Her contemporaries described her as a twofold pioneer. She was the first woman to win anything in a Hantverksförening competition, and hers was the first shop run by a female furniture designer. She often appeared in magazines like Hvar 8 dag, Nya Dagligt Allehanda and Svenska Hem presenting her ideas for home improvements. Greta Magnusson Grossman was a keen supporter of functionalism. The furniture sold at “Studio” was relatively exclusive. It was constructed from various woods including elm, birch and jacaranda. There were comfortable upholstered seats, often in vibrant colour schemes. The furniture was built in small batches, or as one-off pieces. Her clients extended beyond Sweden into France, Poland, Finland and Panama. “Studio” also participated in many exhibitions in Sweden.

When the Second World War broke out and the Germans occupied Denmark and Norway in April 1940, Sweden seemed unsafe and the Grossmans fled. They travelled eastwards, through Russia, to Japan and then sailed on to San Francisco. Various coincidences led to Greta Magnusson Grossman being able to open a new furniture shop at the fashionable North Rodeo Drive in Los Angeles.

Within a few years Greta Magnusson Grossman had generated a whole new business in California. Her ambition was to create simple, cheap furniture of high aesthetic quality but affordable to all. An important source of commissions was the furniture shop Barker Brothers, which was then one of the world’s largest furniture suppliers. They were looking to introduce a new range and Greta Magnusson Grossman was hired not just to create a new series of modern furniture with soft edges, easily accessible to customers unfamiliar with modern furniture, but also to furnish a new showroom which opened in 1947. The reputation she earned through working for Barker Brothers meant that Greta Magnusson Grossman became a widely known name. This in turn led to new commissions in conjunction with architects like Gregory Ain, A. Albert Cooling and Paul László.

Greta Magnusson Grossman also designed houses. These were unique in that the rooms and the furniture formed a unit. The first house lay on a steep incline on Waynecrest Drive in Beverly Hills and was completed by 1949. The villa was a huge breakthrough for Greta Magnusson Grossman as an architect and was covered in magazines such as Arts & Architecture, the leading journal in the field at the time.

Greta Magnusson Grossman designed 20 houses in total in California. The connection between the inside and the outside was paramount and she focused on providing a comfortable environment suited to modern life. The villas built for the Backus, Kiernan and Hurley families were the best known but she also designed several family homes and office. About ten of her projects survive today.

The 1950s was a boom time for modern design in southern California. Greta Magnusson Grossman appears besides the likes of Charles Eames, Eero Saarinen and George Nelson in the list of designers with formative influences. She was one of the few women who succeeded in the field and was one of those who came to define West Coast modernism. She designed products for over a dozen companies. Some of her most well-known pieces were made for the lighting company Ralph O Smith, including the tripod metal floor lamp called “Grasshopper”. This model was also produced by Bergbom in Malmö. In 1950 the Museum of Modern Arts’ prestigious exhibition Good Design selected the so-called “Cobra-lamp” to include in its display. This lamp was also chosen to represent American design in the exhibition Design for Use which toured 75 countries.

The majority of Greta Magnusson Grossman’s designs were made for the company Glenn of California. An elegant walnut chair, with an upholstered seat and back support, won the "Good Design" commendation from the Museum of Modern Arts in 1952. That year the 62-series was released, named by the company founder Bob Baron because – according to him – it was ten years ahead of its time. This range included various multifunctional tables, all designed with humour and a special twist, while also containing unusual combinations of materials including laminated plastic Formica, walnut wood and metal.

Greta Magnusson Grossman’s work was displayed at the most influential design exhibitions in the USA in the 1950s. From 1957 to 1963 she also taught design at UCLA in Los Angeles.

In 1964 Greta Magnusson Grossman retired from her work as a designer and she and her husband moved from Los Angeles to San Diego. She once again took up painting and exhibited her work with the local art club, San Dieguito Arts Guild.

Greta Magnusson Grossman died in 1999 in Encinitas, north of San Diego in the USA. 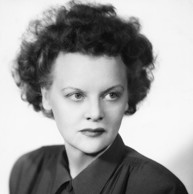