Grete Möller was a ceramist. She produced classically-shaped vessels using a rich selection of glazes.

Grete Möller was born in Køge, Denmark in 1915. Her parents were Erik Gissemann, a merchant, and his wife, Jeanette Dagny née Tengstedt. In 1930 Grete Möller began to attend Kunsthåndværkerskolen in Copenhagen and she completed her training there three years later. Along with fellow ceramist Edith Sonne-Bruun she set up her own workshop in Herlev just outside of Copenhagen in 1934. The pair worked together until 1937.

Grete Möller then moved to Sweden where, for a time, she was married to Christian Jacob Hausel. They had a son named Ib who was born in 1938. The couple lived at Viggbyholm Internatskola, Sweden’s first co-educational boarding school. The school was founded on the principle of culture and the creative development of the individual. Theory and practise were given equal weight and Grete Möller spent a few years teaching “handens arbete” (handicrafts) at the school, which was located in Täby. After a while, however, her marriage failed.

Grete Möller then met Carl Torsten Möller, a ceramist and glass artist, who went by the name of Tom. They married in 1943 and then set up a joint ceramics workshop in Söder, Stockholm. The following year their daughter Mette was born. Grete Möller demonstrated her skills at the potter’s wheel at a handicrafts fair held in Blå hallen (the Blue Hall at Stockholm City Hall). On national Swedish radio she made the case for children to be allowed to play with clay. When NK-bo (Nordiska Kompaniet, a major Stockholm department store) presented The Swedish Room display both Tom and Grete Möller exhibited their artwork alongside major artists such as Viola Gråsten and Astrid Sampe.

In 1947 Grete Möller and her husband jointly held their first ‘solo’ exhibition at the applied arts hall at NK. For this display she had created “jydepotter” (Jute pots), following Danish inspiration, which Tom Möller then decorated and carved. If the vessels had a wooden lid then it was Tom who had carved it or created a small animal figure to serve as the lid of teapot. The couple’s work met with favourable response and the exhibition was well-attended. They held another joint exhibition in Seattle in 1949 and in New York in 1952. Five years after their debut display at NK they returned for another exhibition. The Dagens Nyheter newspaper described it thus: “a pure and beautiful exhibition of lithe thinly formed vessels, with very rough grey chamotte clay exteriors”. Grete Möller’s choice of glazes was also commended.

Grete Möller worked in clay for many years and her ceramics were created in a personal albeit classical style. She produced everyday items which were intended for use but were also quite decorative. She employed a whole range of different glazes, salt and ash glazes, transparent faintly greenish celadon glazes and the dark, classical oriental Tenmoku glaze. She signed her ceramic works Grete, with a heart. When the item was produced jointly with her husband it was signed Grete – Tom.

In 1957 the couple received a stipend from Kungafonden, King Gustav VI Adolf’s 70th-birthday fund for Swedish culture. Two years later they received another stipend, this time from the Helge Ax:son Johnsons stiftelse. The couple further collaborated with the likes of Signe Persson-Melin when NK held a display of Danish and Swedish stoneware. At Svensk Hemslöjd Grete Möller had a solo exhibit of tubs and jars created in muted tones of earthy brown, mustard yellow, and blue-grey. Svensk Form arranged an exhibition of table settings as art and science in 1959 which included Edna Martin and Astrid Sampe’s table-cloths furnished with ceramics made by Karin Björquist and Tom and Grete Möller.

Hertha Hillfon and Tyra Lundgren were another pair of co-exhibitors at the 1960 Milan triennale. In December 1962 Grete Möller was delighted to receive Kågepriset in recognition of being a “bowl-turner with exceedingly distinctive designs and subtle rustic aspects who uses a nuanced range of glazes”. It wasn’t long before she also received two work stipends from Statens Konstnärsstipendienämnd. Grete Möller also won third place in the 1967 Hantverkslotteriet prize competition for handicrafted utensils in ceramics.

Grete Möller and Tom split up in 1977. She then began to work as a teacher at Nyckelviksskolan, a private school on Lidingö. During the 1980s Grete Möller was a member of the artist’s collective Konstnärernas kollektivverkstad. She had begun to take an interest in Chinese and Japanese ceramics. The last time her work was displayed at an exhibition was in March 1983 at Japanska magasinet in Stockholm. There her ceramic tea bowls were shown along with work by Bo Arenander, Anne-Sophie Runius and Jan Sisefsky.

Grete Möller’s work can be seen at Stockholm National museum, at the Victoria and Albert Museum in London, and at the Museum of Modern Art in New York.

Grete Möller died in Stockholm on 21 January 2000. She lived to be 84 years old and was laid to rest in the Memorial Garden at the Woodland Cemetery in Stockholm. 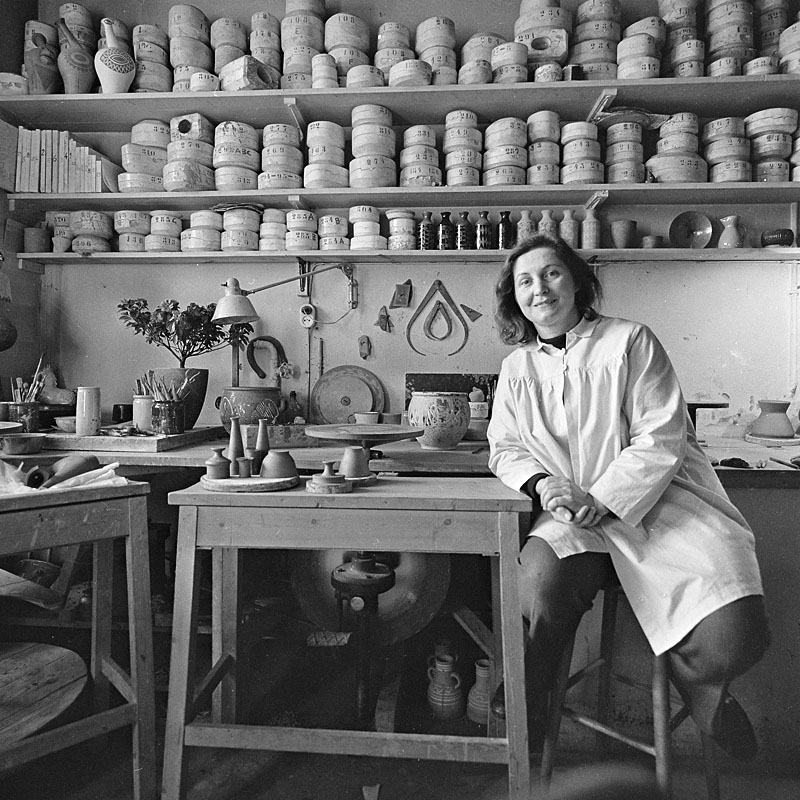