Gunnel Ahlin was an author who was active from the 1960s until the early 2000s.

Gunnel Ahlin was born in Orsa in 1918, and spent her there. Her father, Johannes Hellman, was a headmaster, and her mother was named Aina Albihn. Gunnel Ahlin gained her school-leaving certificate in 1938 and then began to work as a vocational studies teacher. In 1945, while she was serving as the housemaster for the Sigtuna Foundation, she met the author Lars Ahlin. The couple married the following year and their son, Per, was born in 1948.

Gunnel Ahlin’s literary debut came in 1960 with the release of her first novel, Röster en sommar, a light-hearted and stylised portrayal of serious matters. The story unfolds one summer on Öland and consists entirely of dialogue and meetings between people. At the heart of the tale is seventeen-year-old Gudrun, who is looking for the mother she has never known, and Velita, another young woman who has returned to Öland in order to face up to her past.

Gunnel Ahlin published three more novels during the 1960s. Här dansar, from 1962, plays out during midsummer celebrations in Dalarna. Here, again, she takes a light-hearted approach using dialogue to present a story in which painful issues surrounding motherhood are both hidden and revealed. Gunnel Ahlin took a darker approach in 1964 in Puls, where the story concerns a young girl working at a drapery factory in a dull rural town. The slightly melancholic tone of the earlier novels here gives way to irony and satire in a precise portrayal of a young single woman’s everyday life. In her next novel Refuge, published in 1967, Gunnel Ahlin uses a male lead character for the first time. He is a French actor named Marcel Clermont, who has escaped from a German prison camp and made his way to Sweden. The brief love story between him and a Swedish female teacher leads one to question to whom the symbolic title actually refers: is it perhaps the teacher and not the actor who needs a place of refuge?

Gunnel Ahlin’s literary breakthrough came through her historical novel, Hannibal sonen, published in 1974. This comprehensive epic work, which describes how Hannibal futilely resisted his calling to defeat Rome, also proved to be her final independent piece of fiction. The sequel to the story, entitled Hannibal segraren, was released eight years later, and was co-authored with her husband Lars. For this work they both received several prizes. Lars Ahlin, one of the most significant Swedish authors of the post-war period, had not published during the previous two decades and the book marked his return to a productive period of writing.

Gunnel Ahlin died in 2007, aged 88. She is buried beside her husband at the Hedvig Eleonora Cemetery in Stockholm. 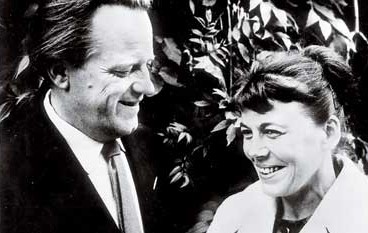