Kai Gullmar was a composer, record producer, singer and actress. During the period 1930—1965, she wrote about 500 melodies of which several became great hits.

She was born Gurli Maria Bergström in Sundsvall in 1905. Her mother ran a café in the building in which they lived, and her father ran a coal import company. She taught herself at an early age to play the harmonica, accordion and later the piano.

In Sundsvall, there was a Children’s Day revue every year. Kai Gullmar made her debut in it as a twelve-year-old in the harmonica orchestra. When she was a little older, she became the prima donna of the revue and called herself Gulli Charmados. In Bengt Haslum’s book about her from 1982, Jag har en liten melodi, she tells the story of how one year she sang a couplet by Ernst Rolf, and how another year she tried to imitate Karl Gerhard — at that time two giants in the Swedish entertainment world.

Her parents planned that their daughter was to work in her father’s company. After taking her school certificate at Sundsvall girls’ school, she was sent to London in the autumn of 1924 to be educated in various subjects. There she visited theatres and dancehalls and became a great fan of modern English and American popular music. When she returned home in the summer of 1925, it was to work in her father’s office for three years. However, she nourished a strong desire to be allowed to move to Stockholm. After persistent begging, her parents gave in.

The Swedish entertainment world was dominated at that time by the “King of Revues” Ernst Rolf. In the gramophone shop in Stockholm at which she was employed, Kai Gullmar met many customers who wanted to listen to and buy his records. She dreamed about being allowed to perform in one of his productions. When he was rehearsing his first revue at the Chinateatern in 1929, she plucked up her courage and contacted him. She asked for the chance to audition for him and she was accepted. A few weeks after her debut, her parents visited Stockholm. They came to the theatre, saw and did not approve of the revue. They declared in unison that she must return with them immediately to Sundsvall.

Her stay in her hometown did not last long. After six months, Kai Gullmar succeeded in obtaining her parents’ permission to move once more to Stockholm. At the beginning of 1930, she started working in a shop selling pianos. A stroke of fate was decisive for the rest of her life, in which the opera conductor Nils Grevellius was to play a central role. He heard Kai Gullmar sing, and was charmed by her voice. On his initiative, she was able to make a record with his melodies and his orchestra. In connection with that, the stage name Kai Gullmar saw the light of day.

Kai Gullmar made her first record in February 1931. Very soon after, only three months later, it was time for record number two. That time she recorded a song for which she had composed both the lyrics and the music. It was exceptional for her also to write the lyrics in her songs. The most productive of her future lyrics writers was Gustaf Wahlenius, a bank clerk born in 1899. He wrote his lyrics under the pen name Gus Morris. During Kai Gullmar’s long career, Gus Morris wrote more than one hundred sets of lyrics to which she gave musical costumes.

In her time spent in bars and cafés, Kai Gullmar met many people from the music and theatre worlds. One of these was the jazz enthusiast Lennart “Pim-Pim” Falk, an aeronautics engineer. They started a singing duo, “Kai and Len”, with American hits as their speciality. In the 1930s, they made several records. They also performed on the radio. Their radio debut was a success, leading after that to a great number of programmes with the title “Half an hour with Kai and Len”.

Kai Gullmar was the first Swedish woman to compose popular music. Her method was to compose the music to a song after she had reviewed the lyrics. This was the case almost without exception in her cooperation with Gus Morris. The same was true of her first really big hit for which the lyrics had been written by Fritz Gustaf, the pseudonym for Fritz-Gustaf Sundelöf. The melody in question was a waltz: “En natt på Ankora Bar”. The singer Karin Juel made a great success with it in 1933.

Kai Gullmar’s energetic participation in the Stockholm nightlife created relationships that benefitted her ambitions to compose music for revues. The relatively small Blancheteatern, where the pen names Kar de Mumma and Karl-Ewert were responsible for most of the lyrics, came to be important customers for her in the mid-1930s. In his 1937 New Year Revue, Karl Gerhard had allowed Kai Gullmar to put music to a few couplets for the first time. Her most well-known composition with lyrics by Karl Gerhard is from 1942: “Vart tar alla vackra flickor vägen?”.

Another of Kai Gullmar’s working partners was Gustav Wally. He was a member of the Wallenberg family, big Swedish financiers, but was more interested in revues than in business. When he had established himself in 1939 as the director of the Södra teatern in Stockholm, he established close contact with Kai Gullmar. In his first revue that year, he himself sang among other things her composition “Jag har en liten melodi”. It became a big hit. Another big hit was her song “En viol, monsieur”, that was performed at the autumn revue the same year. Gustav Wally put on new revues almost every year until 1947 and Kai Gullmar was always one of his colleagues.

When the talkies were introduced in the 1930s, films became an important field for certain composers, naturally enough, and this definitely included Kai Gullmar. Her proper debut took place in the later part of the 1930s, with two films with Sigurd Wallén and three with Adolf Jahr in the starring roles. In the film Melodin från Gamla stan, the Swedish star performer Harry Brandelius was responsible for singing several songs by Kai Gullmar. One of these became a really big hit, namely “Solen lyser även på liten stuga”. Another melody, not linked to any film, was presented by the Gullmar-Morris duo to Harry Brandelius in 1940. It was “Ungmön från Käringön”. His recording of this song immediately became very popular and was a permanent number in his repertoire for the rest of his life.

Kai Gullmar’s dominance in film music continued during the 1940s. In 1940, the young Hasse Ekman directed his own film manuscript with the title Med dej i mina armar (With you in my arms). The theme song in the film had the same name. Kai Gullmar composed the melody and the lyrics were by Hasse Ekman himself. Just before Christmas 1940, the film Swing it, magistern had its debut, starring the then 16-year-old Alice Babs. Here too, the Gullmar-Ekman pair were responsible for lyrics and music. Many are of the opinion that this was Kai Gullmar’s best composition. During the latter half of the 1940s, Kai Gullmar composed the background music for diverse film comedies, sometimes together with Sune Waldimir, the orchestra leader at Sveriges Radio. One such cooperative venture was Soldat Bom from 1948, the first of Nils Poppe’s Bom films. Another cooperative venture during the 1940s was that between Kai Gullmar and the writer Sven Gustafsson at Europafilm which resulted in some songs sung by Åke Grönberg in films and later on records.

Swedish film production was not extensive during the 1950s, and orders for music diminished considerably for Kai Gullmar. Some contributions from her appeared however in Hasse Ekman’s film Seventh Heaven. In two films about Åsa-Nisse, there was also music by the Gullmar-Morris pair, one song each sung respectively by Bertil Boo and John Elfström. Kai Gullmar wrote music for 47 films all in all.

In his biography of Kai Gullmar, Bengt Haslum has defined her as a “Jack of all trades in the entertainment business”. A short summary of others of her achievements make this description even more explicit. In 1948, a collection of children’s songs by Kai Gullmar och Gus Morris appeared with the title Den stygga myggan. Accompanied by Sven

Arefeldt’s orchestra, Kai Gullmar recorded some of these. She had a role as a stage artist in Casinorevyn in 1947 and a few years after that. Apart from revue work, she helped Carl-Gustaf Lindstedt to put music to songs in a children’s operetta for the radio. In the film Lattjo med Boccaccio in 1949, for which Gösta Bernhard and Stig Bergendorff held the reins, she acted the part of both cook and abbess. In 1950, she moved to Scalarevyn in which Nils Perne and Sven Paddock took care of most things. There she had to take on several roles. At a guest performance on a revue stage in Malmö in 1952—1953, she acted the part of an old Sami man and sang “Lapp på luckan”. During the season of 1955—1956, she stood once again on the Casino stage. She composed the musical material based on Gösta Rybrant’s texts for Kar de Mumma’s revues at Folkteatern in both 1956 and 1957.

Kai Gullmar composed about 500 melodies. She made records of a hundred or so of these herself, most of them during the 1930s. It is interesting that she did not write down the actual notation of any of her songs. She did not know how to write musical notation. When asked why, she replied that she was too lazy to learn all that. Others had to take care of that problem. Luckily this happened and most of her melodies thus exist in print.

In Bengt Haslum’s book on Swedish popular music, Svensk populärmusik from 1982, and in Hans Olofsson’s magnificent volume Stora Schlagerboken from 2005, there is no mention at all of Kai Gullmar’s choice of partners in her private life. In articles written during recent years, however, this subject seems to have gained in importance. It is even a central theme in a play that Teater Västernorrland performed in the spring of 2015. In that context, Kai Gullmar’s homosexuality was displayed as openly as she herself did during her life. She never concealed it despite homosexuality formally being criminalised in Sweden until 1944. As an example of her fearlessness, it is often mentioned that she dressed in men’s suit and tie, and that she wore her hair short. She is described as being a role model for many and praised for her upright behaviour when it came to gender issues. Kai Gullmar’s only known partner was Rita Rosenberg, a Danish woman born in 1919, who was a ballet dancer in her youth. They lived together in Stockholm for more than 20 years.

In the 1960s, Kai Gullmar suffered from several different illnesses. An accident when she slipped and fell led to her having to get around in a wheelchair during her last ten years of life. She kept up her good humour nevertheless, it is said. Kai Gullmar died in 1982 and was buried in Gustaf Adolf’s Church in Stockholm on her birthday, 2 April. The organist played “Jag har en liten melodi” as the postludium. 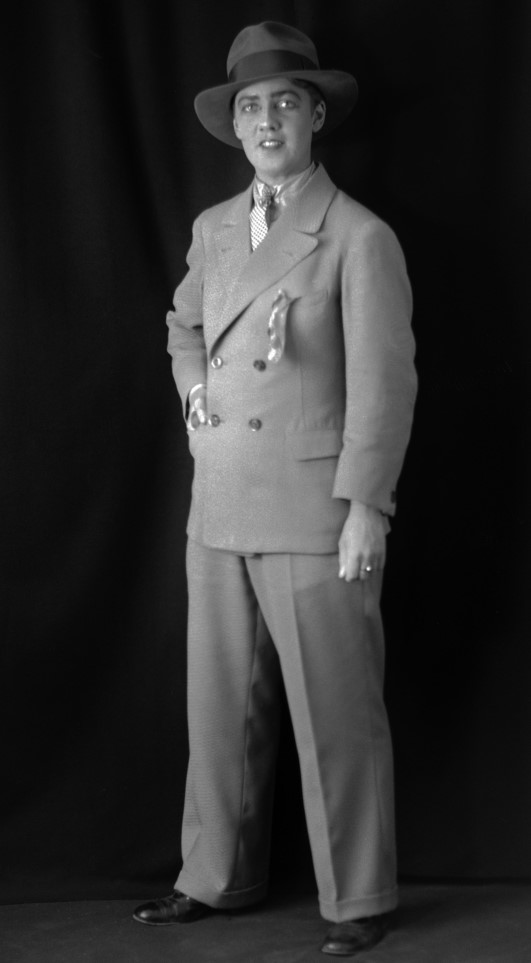