Hanna Lindmark was one of Sweden’s first successful entrepreneurs. She invented and founded the Margareta schools, home economics schools with associated restaurants, shops and function halls, which spread nationwide and made her very wealthy.

Hanna Lindmark was born in 1860 into a crofting family in Arnäs outside of Örnsköldsvik. Her mother, Cajsa Brita Persdotter, died in childbirth in 1869 and Hanna Lindmark was sold at a paupers’ auction to whichever individual in the parish was prepared to take her in for the lowest price. Her father, Nils Olofsson, became a pauper who was taken on at a local farm. Hanna Lindmark came to be auctioned once a year to various foster parents until she attained 15 years of age and could begin service as a servant girl.

Hanna Lindmark’s nomadic childhood meant that it was impossible for her to attend school. One of her foster mothers did, however, teach her to read and write. She taught herself to prepare food when she was a minor servant in the various homes she lived in. Hanna Lindmark’s father married three times and had a total of 22 children, of which twelve died in infancy whilst the remaining ten survived. One of them would become one of Sweden’s wealthiest women.

An important role model for Hanna Lindmark was Anna Johansdotter Norbäck, known as Mor Anna (Mother Anna), the founder of the Annanite church in Arnäs. Hanna Lindmark’s parents brought Hanna with them to Mor Anna’s open congregation, and this formed the basis for her lifelong and deep-held faith in God.

Hanna Lindmark became noticed for her ability to prepare tasty food and was consecutively employed as a cook for various members of the clergy, wealthy farmers and wholesale merchants and finally, for the photographer Adele Kindlund in Östersund. She began working there at the age of 36. It was at this point that she realised that, just like her mistress, she could provide for herself if she had her own career.

In 1898 Hanna Lindmark used her savings to apply to Elsa Borg’s Bibelkvinnohem (Bible Women’s Home) in Vita Bergen in Stockholm. Her dream, inspired by Mor Anna, was to become a missionary, but after a year at Vita Bergen she had run out of money. Hanna Lindmark then decided to rely on what she already knew how to do, namely cook.

In 1899 Hanna Lindmark was employed as housekeeper at the newly-opened cafeteria run by the Kristliga Föreningen av Unga Män (the young men’s Christian association) in Östersund. This came to be the start of her career as a cook. She soon took over running the cafeteria. She already had a business plan – a plan which comprised four pillars and would prove itself to be successful for more than 70 years.

The first pillar involved Hanna Lindmark teaching young Christian girls to cook good quality traditional Swedish homemade food, just as she had learned to do as a nine year old. The second pillar was the daily selling of this food in shops – she thus became the first provider of “take-away” food in Sweden, long before the concept even existed. The third pillar was the establishment of a restaurant for teetotallers, where they could enjoy their meals without exposure to other inebriated guests. The fourth pillar was the provision of function suites where people could hold parties and various celebrations with food and a catering service.

Hanna Lindmark’s catering service was a success from the outset. One of her first guests was Axel Lindmark, a leveller who worked in the mapping section of the military. He had newly become a widower and his military posting had sent him to Östersund, along with his three children Oscar, Aimée and Robert. Hanna and Axel very quickly came to form a relationship and they married in 1904. Axel Lindmark remained Hanna Lindmark’s lifelong companion. He became the bookkeeper and administrator for what would become Margaretaskolan (the Margaret school).

In 1905 Hanna Lindmark left Östersund and opened the first Margaret school in Norrköping. The timing was chosen to coincide with a large art and industry fair in the town as Hanna Lindmark wanted to draw a large crowd to her venture. Gradually she became established in town after town and the Margaret schools became a nationwide chain comprising shops, restaurants and function suites in Stockholm, Gothenburg, Malmö, Norrköping, Linköping, Borås, Jönköping, Västerås, Örebro, Lund, Helsingborg and Tranås. Each town also had a home economics school for young Christian girls. These were run by a governess who was responsible for both teaching and catering services.

As the organisation began to grow and become increasingly profitable Hanna Lindmark began to invest in property. In 1922 she bought Steninge castle in Märsta near Stockholm and thus become the owner of a large property including agricultural land and a commercial garden. Stenladugården, as it was known, was the largest of its kind in Sweden and Hanna Lindmark had 170 cows giving her milk, cream, butter and cheese for her kitchens. In the 28 greenhouses at Steninge she grew tomatoes, strawberries and grapes on a scale that had not before been seen in Sweden. Her first class, locally-produced raw products would in today’s terms have resulted in Hanna Lindmark’s business being labelled organic – she was also a pioneer in that sphere. By producing her own raw goods Hanna Lindmark was less vulnerable when the crises of the 1930s hit, leading to rationing and food shortages.

In 1923 Hanna Lindmark bought the Dickson palace in Gothenburg. The town was preparing for a large industry fair and Hanna Lindmark wanted to have one of her Margaret schools up and running when the event opened. In 1933 she acquired the Mauritzberg castle in Östra Steby at Vikoboland and in 1933 she became Torsten Kreuger’s first tenant in the Citypalats on Norrmalm square in Stockholm. Hanna Lindmark also opened a hotel business on one of the upper floors there. Despite the failure of the Kreuger venture the Margaret school survived the financial crash thanks to Hanna Lindmark’s foresight and flexible leadership which constantly adapted to the demands of the time.

The high standards of the Margaret schools were maintained by Hanna and Axel Lindmark’s regular visits to and inspections of each school. Axel Lindmark supervised all the bookkeeping and Hanna Lindmark inspected the kitchens, general cleanliness and tested the food. The teaching was expanded to include new elements such as nutritional information.

Hanna Lindmark’s background in the free church and Axel Lindmark’s background in the Swedish church led to the couple’s shared desire to work to bring the two churches together. Steninge and Mauritzberg became centres where large ecumenical meetings were held to which Hanna Lindmark invited prominent leaders of both the free and state churches. The Margaret schools donated ten percent of their profits annually to four missionary societies. This was Hanna Lindmark’s way of supporting missionaries even though she herself never became one.

In 1927 the government awarded Hanna Lindmark the Illis Quorum medal of honour. The reason given was that she was being honoured “for her contributions as a teacher”. This was a personal triumph for Hanna Lindmark, who had never attended school herself.

After her husband’s death Hanna Lindmark carried on with the Margaret schools until 1941 when she died from a lung infection. She willed the Margaret schools and all her properties to four missionary societies: Svenska Kyrkans Mission, Svenska Missionsförbundet, Svenska Baptistsamfundet and Svenska Missionen i Kina. She thereby changed her original intention of awarding an inheritance to the respective governesses of each school. This proved to be a fateful change of mind. The Margaret schools went bankrupt and closed down in 1977 after the profits had been embezzled by one of the executive directors who had taken over responsibility after Hanna Lindmark’s death. 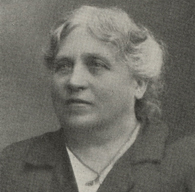