Archaeologist, active within the women's movement

Hanna Rydh was the first woman to gain her doctorate in Swedish archaeology. In addition to her archaeological efforts she also made meaningful contributions to contemporary social welfare matters and women’s political matters.

Hanna Rydh was born in 1891. She was the youngest of three children, all of whom were raised within a well-to-do Stockholm family. Her father, Johan Albert Rydh, an engineer, established a family firm within the central heating business. Her mother, Matilda Westlund, was a qualified public-school teacher. Academic engagement was encouraged in the family home.

Hanna Rydh attended the Wallin girls’ school. As a high-schooler she joined SSUH, Sveriges studerande ungdoms helnykterhetsförbund (Swedish young students’ temperance society). In 1911 she enrolled in the humanities department of Stockholm college, where she read literature, art history, and archaeology. Lectures, excursions, and exams in all three subjects followed one after the other, while archaeology also included short stints of field work. Hanna Rydh was involved in setting up the Stockholms Kvinnliga Studentförening (Stockholm female students’ society), a discussion club and meeting place offering mutual support. Hanna Rydh gained her ‘laudatur’ in archaeology in July 1914. Following her final examination in art history she gained her Bachelor’s degree in December 1915. She then continued her archaeological studies as a senior student at the college. She undertook research into the Viking era, on which she intended to base her dissertation for her licentiate.

On gaining her Bachelor’s degree Hanna Rydh benefited from a new position within the profession. It was not long before she received short-term commissions entailing field- and museum work, mainly within Vitterhetsakademien (the Royal Swedish Academy of Letters, History and Antiquities) and on behalf of Statens Historiska Museum. Her most significant work involved the Adelsö project, which was focused on investigating the late prehistoric period and early medieval period on Adelsö near Björkö/Birka. Hanna Rydh’s detailed descriptions of her research and finds have gained renewed relevance now that Birka-Hovgård has been designated a world heritage site.

When Hanna Rydh was nearing the end of her studies for her licentiate she enrolled at Uppsala university. There Professor Oscar Montelius, who was the director of the national heritage board and the husband of Agda Montelius, herself the chair of Fredrika-Bremer-Förbundet (association), suggested that Hanna Rydh should publish her work in the form of a doctoral thesis. Thus, in May 1919, she gained her doctorate. Shortly afterwards she married her colleague Bror Schnittger.

The 1920s proved to be an intense decade for Hanna Rydh. She published a series of texts, including a comprehensive monograph on Schnittger’s research into the medieval Västgöta stronghold of Aranäs. She also wrote archaeological guidebooks, children’s books based on prehistory, as well as popular accounts of women from prehistory, of which Kvinnan i Nordens forntid is best known. Her travelogues of her many visits to the countries surrounding the Mediterranean Sea were also based on women’s biographies.

In 1922 Hanna Rydh received a research stipend from The International Federation of University Women. This enabled her to undertake six months of studies in France, where she served as an assistant at the Musée des Antiquités Nationales in Saint-Germain-en-Laye just outside of Paris. The museum was an important hub for research on the European Stone Age, the jewel of which was the French cave discoveries. Hanna Rydh found herself in a welcoming research environment with access to major collections, an extensive library, and new archaeological approaches. Her book Grottmänniskornas årtusenden was a product of the time she spent there. Despite its popular

success the book still occupies a space among archaeological textbooks given that for many years it was the sole Swedish-language overview of the Stone Age cave-paintings.

Hanna Rydh gave birth to her first child just a few months before receiving her stipend to go to France. This left the directorate of the British Federation of University Women stipend uncertain about her situation, so they sent her a telegram asking whether the birth of her son would create an obstacle to her research. She replied: “My son’s birth makes no difference”, causing great mirth in British circles and was almost adopted as an anecdote, according to the journalist Barbro Alving in a report she produced for the journal Idun.

Hanna Rydh’s husband, Bror Schnittger, died in June 1924 aged only 42. This left Hanna Rydh, then 33 years old, alone with 2 young sons. She considered it her duty to finish Schnittger’s current archaeological projects. The last of these, a publication of the investigations into Stone Age finds in the Stora Förvar cave on Stora Karlsö, was only completed in 1940. This was partly due to the fact that Hanna Rydh had taken on completely new tasks outside of archaeology in the intervening period.

In 1929 Hanna Rydh got married again, to Mortimer Munck af Rosenschöld, undersecretary to the Ministry of Education. Some years after their wedding he was appointed governor of Jämtland-Härjedalen and the family moved to Östersund. The couple remained there until the governor retired in 1938. During that time they also had a daughter. Hanna Rydh was kept fully occupied as the governor’s wife, performing representational duties as well as various social and cultural tasks. Despite not really having the time for archaeology she still managed to write a number of lectures and short articles.

Hanna Rydh made significant contributions to the county during her husband’s eight-year stint as governor. She was very well-liked and known for being an engaging and captivating speaker. Her interest in cultural heritage matters predated her move to Östersund. Jämtland was home to the cultural history association called Heimbygda. She was able to use this group as a platform for her interests and to support a range of projects based around cultural heritage. She was particularly enthusiastic about the local crafts in the county, which Heimbygda had a tradition of protecting. For example, the so-called Sockendräkt project, focused on inventorying and recreating different folk costumes, was very popular. In 1935 over 1 000 people, wearing either resurrected or reconstructed folk dress, attended a combined musicians’ gathering and folk-costume display at the Jamtli open-air museum. The project is a clear example of Hanna Rydh’s particular emphasis on women and traditional female pastimes as part of her cultural and social activities. Cloth weaving, sewing, embroidery, and the making of folk dress were all important elements in her work which sought to highlight women’s efforts.

Another project which focused on women’s work was Landshövdingskans kofond (governess’s cow fund). Many basic items were in short supply during the depression of the 1930s. Hanna Rydh had the idea to fundraise for the local Red Cross so that they could purchase so-called ‘loan-cows’ which could be temporarily lent to families in need. Those able to pay a token sum each month could then claim outright ownership of the cow after a few years. Hanna Rydh paid for the first cow herself, hence the name Landshövdingskans ko. The idea of giving the cows individual names was a brilliant one and helped to create a bond with the donors. By setting up fundraising campaigns at various workplaces money was quickly gathered for the likes of Tempoexpediternas ko, Handelsbankens ko, and Tidningen Våra Damers ko, for example.

Hanna Rydh’s involvement in Fredrika-Bremer-Förbundet (association) also increased during her time in Jämtland. From 1933 onwards she was a member of the board and in 1937 she became the association’s chair. Largely due to her results-driven approach, her efficiency, and her ability to delegate, the association grew and became an important agent which placed women’s views on various social issues in focus. By running courses and public-information efforts, attempts were made to increase women’s engagement in society. Through her involvement in the association Hanna Rydh increased her contacts with international feminists, leading to her election as deputy chair of The International Alliance of Women just before the outbreak of the Second World War. During the war, however, the organisation’s efforts were suspended. Hanna Rydh then directed her energy towards supporting domestic defences. In the spring of 1940 she published a pamphlet entitled Frihet och Demokrati in which she argued in defence of democratic values and warned against dictatorships. She was also a member of the covert – albeit known to the security services – meetings held by Tisdagsklubben. Her anti-Nazi stance was so well-known that the Nazi-publication Vem är vem i folkfronten? described her as an “Anglo-Bolshevik and feminist”. The respective agendas of the Red Cross and Fredrika-Bremer-Förbundet also reveal how the two organisations cooperated in supporting the neighbouring Nordic countries. Her biggest project was one she set up with Maja Sandler, the wife of a Swedish cabinet minister, to evacuate Finnish war children refugees to Sweden.

Once the war ended the doors to international women’s efforts opened up again. During Hanna Rydh’s period as its chair The International Alliance of Women became a consulting organisation to the Economic and Social Council (ECOSOC), the economic-social advisory committee of the United Nations. As the Alliance chair she attended an Indian women’s conference in Hyderabad in 1946, which led to an interest in India as a whole and in the archaeology of the country. Through energetic perseverance she was able to organise an archaeological expedition to India which resulted in investigations into parts of the ruined hill of Rang Mahal in Rajastan between the years of 1952–1954. This was her final archaeological project. 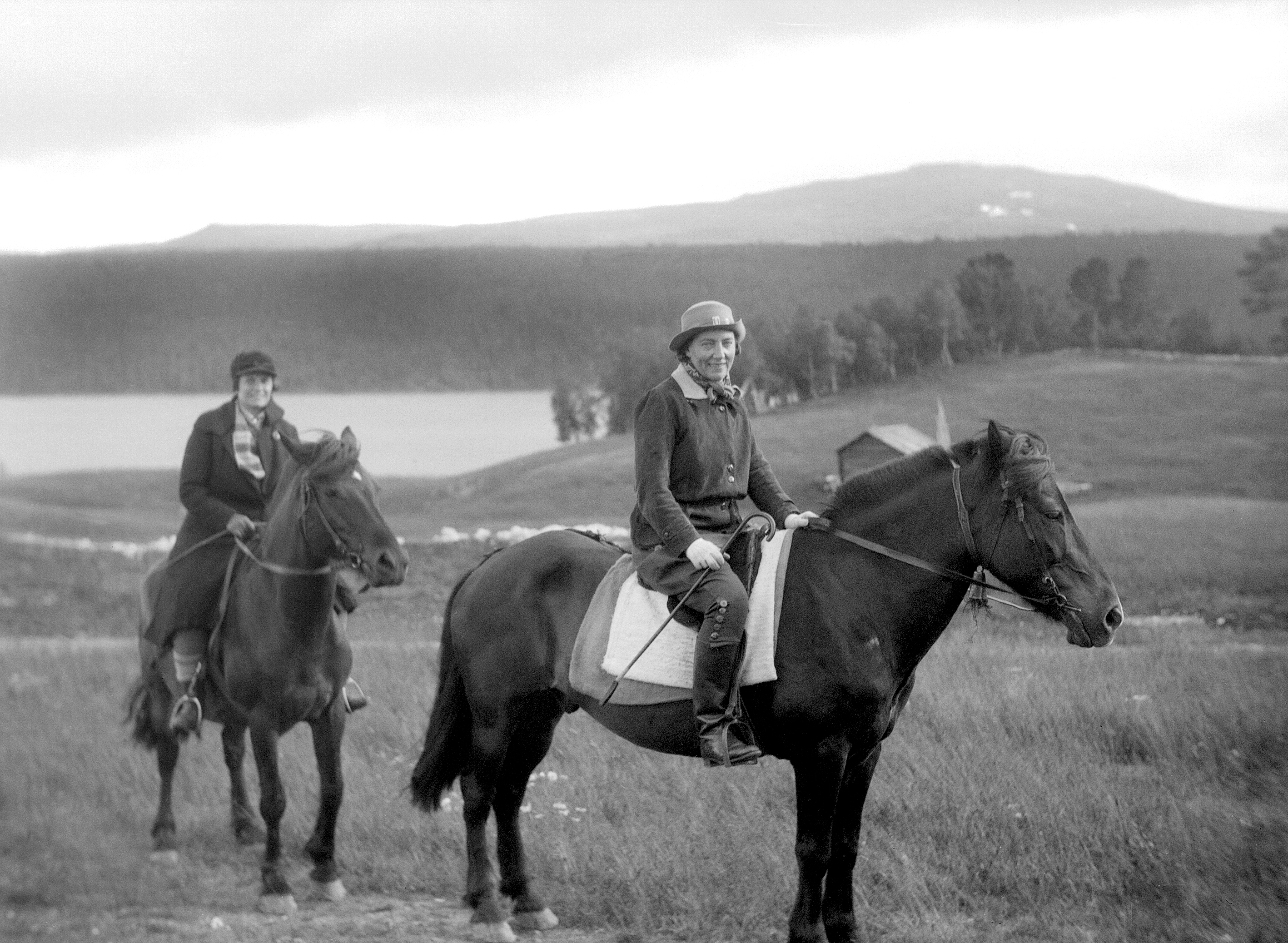