Harriet Bosse was one of Sweden’s most esteemed actors during the first decades of the twentieth century. She is also known for having influenced August Strindberg’s literary output.

Harriet Bosse was born in Kristiania (now Oslo) in 1878. She was the youngest daughter of Johan Heinrich Bosse, a bookseller and publisher. Two of her older sisters worked in the theatre and this became a deciding factor for her future. Alma was a talented comedic actress and probably Harriet Bosse’s most important teacher with regard to performing, whilst Dagmar was a concert and opera singer. Harriet Bosse travelled to Stockholm in the autumn of 1894 in order to train at Kungl. Musikkonservatoriet (today Royal College of Music), initially with the intention of becoming a music teacher. She graduated from the college in 1896 having focused on solo singing.

Harriet Bosse made her debut in August 1896 when she played the part of Julia in a shortened version of Shakespeare’s Romeo and Juliet at the old Tivoli theatre in Kristiania. The play was produced by her sister and directed by her brother-in-law. Alma Fahlström played the role of the Nurse whilst Johan Fahlström played Romeo. However, this led to a fall-out between the sisters and between Harriet Bosse and her brother-in-law, probably as a result of jealousy on the part of Alma Fahlström.

Harriet Bosse made her debut at Dramaten (the Royal Dramatic Theatre in Stockholm) in 1899, following a study trip to Paris during the winter of 1898 and acting lessons with the actress Berta Tammelin. In the period up to 1904 she portrayed 29 different characters, including Anna in Första fiolen, by Jens Petersen and Gustav Wied, Isotta in Per Hallström’s poetic play En venetiansk komedi, Hedvig in Ibsen’s The Wild Duck, and Julia in Shakespeare’s Romeo and Juliet.

Harriet Bosse came to the attention of August Strindberg when she played Puck in Shakespeare’s A Midsummer Night's Dream. Strindberg decided that she should play the female lead in his latest play Till Damaskus, and she duly portrayed Damen in the production performed at Dramaten in 1900. Strindberg also wanted Harriet Bosse to play the role of Eleonora in Påsk, which was to be staged in 1901. This became her most successful and best-loved character portrayal. The initial contacts the couple had during the rehearsals for Till Damaskus soon turned into a full-blown relationship and during the rehearsals for Påsk they became engaged. On 6 May 1901 Harriet Bosse and August Strindberg got married.

Harriet Bosse was very successful right from her very first performances at Dramaten and thus developed her own career and public reputation in her own right. Her relationship with Strindberg very quickly degenerated due to Strindberg’s control issues, as well as the significant age difference between the two, and their disparate temperaments, lifestyle goals, and emotional needs. By the time their daughter Anne-Marie was born in 1902 the couple were already separated. They divorced in 1904 but maintained an on-off physical relationship until Harriet Bosse started planning her second wedding in 1908.

In 1906 Harriet Bosse was employed by Svenska teatern (Swedish theatre) on Blasieholm in Stockholm where Albert Ranft was the director. She remained there until 1911 and performed various roles very successfully, including Anne Whitefield in Man and Superman by George Bernard Shaw, Kersti in Kronbruden, and Indra’s daughter in the very first production of Ett drömspel, both of these by Strindberg. She began to play more light-hearted roles after a few years at the theatre and the theatre management began to capitalise on her comedic aptitude. She was Svenska teatern’s leading female star and became one half of a popular stage couple opposite Gunnar Wingård. The two of them got married in 1908 and their son Bo was born the following year. This marriage did not last, however, and by 1912 the couple had divorced. August Strindberg died in the spring of that year, and in the autumn Gunnar Wingård committed suicide.

Harriet Bosse was once again engaged by Dramaten in 1911 after the management had promised her weightier roles. Indeed she came to act in what became viewed as the prime of her stage performances. Her many successes included playing Viola in Shakespeare’s Twelfth Night, and Eliza Doolittle in George Bernard Shaw’s Pygmalion. When she played the title role of Hugo von Hoftstmannsthal’s Elektra in 1912 many believed this was her most masterful portrayal of a tragic character. The photographs of her as Elektra doing her ritual dance on her father’s grave testifies to the mystical and hypnotic elements of Harriet Bosse’s character portrayal. In 1916 she was awarded the medal Litteris et Artibus. She looked back on this time at Dramaten, from 1911 to 1918, as the happiest phase of her career. However, towards the end of that period she became dissatisfied with the roles she was given and left that theatre. Her demands as regards the roles she played led to rumours that she was difficult and demanding, although her talent was never questioned. This eventually led to her increased isolation during the later years of her working life.

Harriet Bosse’s charisma and acting style were marked by intelligence, restraint, and stylised simplicity in terms of her stage movements and gestures. Although she, to some degree, retained all of these elements, she also came to master a more natural acting style and audiences often viewed her as true to life when she was portraying realistic characters. She moved in a suggestive and decided manner but it was above all her voice and diction which were her trademarks. Her voice was often described as silver-toned, with melodic, soft phrasing whilst precise in diction and making use of very long vowels, a certain vibrato and clearly spoken consonants. She emphasised the mystique in her charisma through her appearance. She was a dark-haired beauty with brown eyes, and the somewhat oriental aspect to her looks often led to her being offered roles of characters of eastern origins.

Harriet Bosse freelanced between the years of 1918 and 1933. She worked for the artistically innovative Intima teater on Birger Jarlsgatan and for Per Lindberg’s Konserthusteater. She also toured and made guest appearances, for instance at the Lorensbergteater in Gothenburg and at Dramaten. She was always perceived to be maintaining a certain distance when portraying her characters and never completely gave into her roles. According to her colleagues she was similarly distant even in private. She was imbued with a certain aura both in regard to her role as prima donna and as Strindberg’s third wife.

In 1927 Harriet Bosse married for a third time, to the actor and director Edvin Adolphson. At the start of the relationship she was the exalted star whilst he was the considerably younger up-and-coming actor. Their roles reversed in the early 1930s, which, according to Adolphson, had a negative impact on the marriage. In 1932 the couple divorced.

Harriet Bosse decided to retire in 1943, having spent the previous ten years at Dramaten. She had returned to the safety of a large theatre but had lost her position as lead actress. She called this period her “journey to Golgotha”. She performed in 53 roles at Dramaten in the period of 1911-1943. At the time of her retirement she had played about 150 different roles throughout her career.

Unlike many other actors of that era Harriet Bosse was not against the development of celluloid films, but she did believe that stage acting had greater worth than film acting. Her film debut occurred in 1919 in Ingemarssönerna: Filmskådespel i 10 akter efter inledningskapitlet i Selma Lagerlöfs JERUSALEM, directed by Victor Sjöström. The film became an international success and Harriet Bosse’s performance gained a lot of favourable attention. 17 years passed before she played her second film role as Franskan in Bombi Bitt och jag, 1936, directed by Gösta Rodin. She emphasised Franskan’s sensuality, duplicity and toughness, and once again she was favourably reviewed. She played smaller parts in both Anna Lans, directed by Rune Carlsten in 1943, and in Appassionata, 1944, directed by Olof Molander. After that she only appeared on the radio.

Harriet Bosse’s career as an actor as well as her position as public persona was marked by her short-lived marriage to Strindberg. They not only had a child together but also produced a lot of literature together. The title role in Svanevit, 1901, was specifically written for Harriet Bosse, as well as the title role in Kristina, 1901, and Indra’s daughter in Ett drömspel, 1902. Engelbrekt was inspired by the couple’s relationship and Harriet Bosse’s character can also be seen in the character of the wife in Svarta handsken, 1907, and that of Gerda in Öväder, 1907. By acting in a lot of Strindberg plays Harriet Bosse also helped to popularise his plays and contributed to his work becoming canonised. She has often been attributed the role of being his muse but in fact her role was far more instrumental than that. In total she portrayed 14 of Strindberg’s characters. She would often revisit roles in different productions and in different contexts as a visiting performer and on tours, such as Kronbruden which was repeated in 1907, 1917 and 1918. The last Strindberg role she played was Henriette in Brott och brott, in 1936, during a tour with Riksteatern and at Dramaten, a role she had first played in 1916.

Harriet Bosse’s presence can also be felt in other texts written by Strindberg, such as Taklagsöl, Ensam, Svarta fanor, Syndabocken, Sagor, and Ordalek och småkonst, where she appears in several poems as the deceitful woman. The poem “Vid sista udden” also references her in the lone woman playing piano in the archipelago who causes both people and animals to fall silent.

In 1955 Harriet Bosse moved back to Oslo where her children and grandchildren lived. She never felt at home, however, and yearned for Sweden. She died in Oslo in 1961, aged 83. She was later turned into a fictional character in novels and TV programmes, such as the TV series August Strindberg: Ett liv, 1985, which was written by P. O. Enqvist. According to a rumour spread in part by the author and director Ingmar Bergman Harriet Bosse treaded the boards one last time at Dramaten after her death. 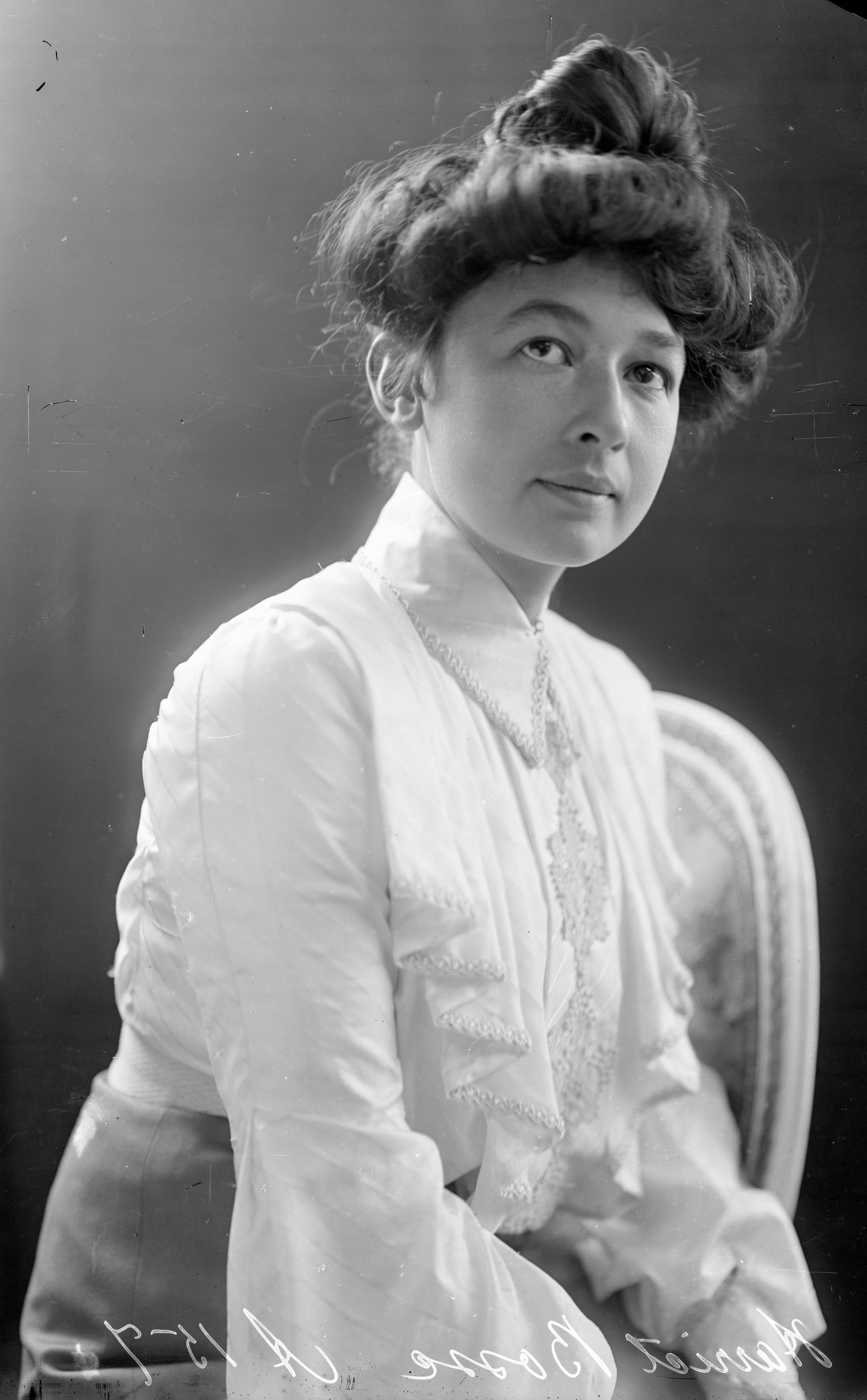