Harriet Löwenhjelm was an artist and a lyricist. She gained posthumous fame with a poem which was perceived to be modern, original and stylistically innovative.

Harriet Löwenhjelm was born in 1887 in Helsingborg. Her father was Colonel Gustaf Adolf Löwenhjelm. However, it was her mother, Maggie Löwenhjelm, who was the dominant figure in the family. Maggie Löwenhjelm, née Dickson, came from a Scottish family, which had immigrated to Gothenburg and established the highly successful family business James Dickson & Co there during the nineteenth century. The family life was marked by visits of the maternal aunts and their families, and by religious devotion, which included daily worship at home after breakfast and weekly church attendance on Sundays. Whilst their mother led a comparatively reserved social life for religious reasons, the five children were allowed to enjoy themselves and the household resounded with a playful atmosphere where the door was always open to friends.

Harriet Löwenhjelm trained to be an artist at Konstakademien (the Royal Academy of Fine Art), but she did not enjoy her studies. After breaking off her studies at the Academy she started studying at Carl Wilhelmson’s private painting school. He was known for his teaching skills and for taking a democratic approach which entailed the equal treatment of male and female pupils. When Harriet Löwenhjelm discovered graphic arts, which she described as “finding a treasure in a field”, she transferred to Axel Tallberg’s Grafiska skola in January 1913. Harriet Löwenhjelm’s parents did not view their daughter’s artistic studies as conducive for a career. They thought the same of Harriet Löwenhjelm’s studies at Anna Sandström’s högre lärarinneseminariet (advanced female teacher training seminar), which Harriet attended as an “extra” student, unlike her friends Honorine Hermelin and Elsa Björkman.

Elsa Björkman and Harriet Löwenhjelm shared an interest in the arts, which, amongst other things, resulted in Verket om de Smale och de Bedre, a presentation of character types in both words and images, which was printed at Tallberg’s Grafiska skola, which Elsa Björkman attended too.

Harriet Löwenhjelm’s studies were once again curtailed, this time due to illness. She was admitted to Löt sanatorium near Strängnäs in January 1914. Later she was taken to various sanatoriums in Denmark and Norway, and in between those visits to the Romanäs sanatorium near Tranås. While she was ill Harriet Löwenhjelm continued to be artistically productive. She regained her desire and aptitude for painting after she had heard it said that Wilhelmson believed that she had artistic talent. During a visit to Stockholm at Christmas 1915 she learned to cut boxwood and to produce woodcuts from Harriet Sundström, who was one of the instigators behind Föreningen Original-Träsnitt (original woodcut association). During the final stages of her life Harriet Löwenhjelm painted “modern paintings”. None of them have survived, however. There are only a few surviving examples of her oil paintings, such as her portrait of her cousin Marianne Mörner. An exhibition of Harriet Löwenhjelm’s work was held in her honour in 1929 at Galerie Moderne in Stockholm, which included a number of her drawings, and in 1963 a retrospective exhibition was held at the Nationalmuseum.

Harriet Löwenhjelm is best known for her lyrical poetry. She only published a single collection of her poetry during her lifetime, which was unassuming in both format as well as content: Konsten att Älska och Dess Följder Hofsamt utlagdt i Bild och Text af Harriet Löwenhjelm, 1913. As Norstedt publishers had rejected it Harriet Löwenhjelm published 50 copies of it herself at Generalstabens Litografiska Anstalt.

Important inspiration for her creative output came from Harriet Löwenhjelm’s journeys. During the winter of 1904-1905 she and her father travelled to Ceylon in order to visit her sister Amelie, who ran a tree plantation there along with her husband Oscar Dickson. En route they visited museums and tourist attractions in Copenhagen, Nürnberg, Munich, Zürich, Lucerne, Milan and Genoa. In the summer of 1913 Harriet Löwenhjelm went to Paris, where she admired The Lady and the Unicorn tapestries at the Cluny museum and the art of Watteau at the Louvre, and traces of it can clearly be seen in Konsten att älska.

Following Konsten att älska, Harriet Löwenhjelm put together a new collection of poetry, the so-called Sonnetboken. This included poems she had written between 1914 and 1916. They were illustrated with woodcuts. During 1917 Harriet Löwenhjelm gathered her illustrated poems in a notebook which came to be called Manuskriptboken.

One of Harriet Löwenhjelm’s favourite reading materials was the fairy tale collection One thousand and one nights, but she also enjoyed the comics Strix and Söndags-Nisse, particularly Karl Benzon’s nonsense poetry published under the pseudonym of Bob. His delight in unusual and foreign words, geographical, zoological, and culinary terms, as well as the vocabulary of history of religions, in which the exotic gains prominence, are reflected in several of Harriet Löwenhjelm’s early poems.

Her love of language contributes to the unique ambiguity which is typical of Harriet Löwenhjelm’s lyrical poetry and which is hard to pinpoint. Humour, light, light-hearted playfulness, naivety, a love of life, and irony are contrasted against melancholy, anxiety, darkness, sin, guilt, loneliness, and death. Biblical tales become symbolic representations of the existential human condition and desolation. Sören Kierkegaard’s philosophy helps to place the individual under a magnifying glass: ruled by dreams and desires, whilst also limited by them, both grandiose and small, comical, tragic, and sublime.

On her deathbed Harriet Löwenhjelm handed over both Manuskriptboken and Sonettboken to her friend Elsa Björkman and requested that they be published. Harriet Löwenhjelm knew that her parents would oppose these publications and she encouraged Elsa Björkman to get help from her cousin Christer Mörner. Harriet Löwenhjelm’s parents were unsure how outsiders would interpret the poems, and this led to redactions of verses and sometimes even of entire poems from Manuskriptboken and Sonettboken. Dikter med dem tillhörande teckningar valda ur Harriet Löwenhjelms efterlämnade papper was published in 1919 by Handpresstryckeriet in Råsunda, at the time run by Arthur Sahlén. As it was not a publishing house it is unlikely that any review copies were distributed. The aim behind the book’s release was not to make it accessible to the wider public but to fulfil Harriet Löwenhjelm’s last request. However, in time, the book garnered a certain response and this led to the author and literary critic Sten Selander including three of Harriet Löwenhjelm’s poems in the anthology entitled Den unga lyriken, 1924. This then aroused the interest of another literary critic, Olle Holmberg, who wrote a much-noticed essay in 1927. At the same time Norstedt publishers decided to produce an expanded edition of Harriet’s posthumous book. Dikter med dem tillhörande teckningar valda ur Harriet Löwenhjelms efterlämnade papper, 1919, comprised 29 poems and in 1927 this was expanded to 108 poems, and finally in 1941 it included 123 poems. Still more poems were subsequently published in Harriet Löwenhjlem. Brev och dikter. Med teckningar av författarinnan, 1952. After Harriet Löwenhjelm’s death yet more written material was found in a small book which was published in 1963 in facsimile and entitled Harriet Löwenhjelms bönbok. It also comprised loose-leaved poems, some of which had probably been written as late as 1918. All of Harriet Löwenhjelm’s lyrical poetry has been put together in Samlade dikter, which was published in 2011.

Harriet Löwenhjelm died of tuberculosis at Romanäs sanatorium in 1918. She was only 31 years old. 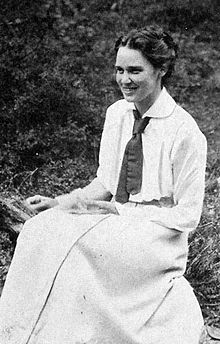