Hedvig Charlotta Nordenflycht was one of the most influential writers and thinkers of the 1700s in Sweden. Her writings on women’s emancipation are precursors to the feminism of later periods.

Hedvig Charlotta Nordenflycht was born into the family of a government official. Both of her parents belonged to socially established families. Her mother came from a clerical background. Her father’s family numbered government servants and he himself enjoyed success within that sphere; in 1727 he was ennobled under the name of Nordenflycht. The family was financially well-off, which meant that the children were privately tutored in the home. Given her talents, Hedvig Charlotta Nordenflycht was sometimes allowed to study along with her brothers. In this era it was unusual for girls to gain an education which crossed the gender norms. In her brief autobiography Hedvig Charlotta Nordenflycht complains of the lack of a systematic education but she nevertheless learned an amount of German and Latin on top of the normal curriculum which included French. In general, her schooling situation and her educational journey can largely be seen as typical for female authors of the 1700s: each one had to struggle with not only the lack of organised, advanced study opportunities but also the frequently judgemental and negative attitudes towards women who aspired to gain an education.

Hedvig Charlotta Nordenflycht had to seek alternative routes to develop her intellectual interests; one option open to women at that time was to gain stimulation from educated men. Some of these men are named in her autobiography names: her brother’s tutor Johan Tidemann, her cousin Carl Klingenberg, and the Danish author Ludvig Holberg. The concept of a relationship between a man and a woman that was equal, tender, and virtuous, in contrast to carnal love, is a frequently recurring theme of hers which, for example, she uses in her bucolic poetry, thus going against the genre conventions of pastoral poetry. Hedvig Charlotta Nordenflycht married Jacob Fabricius, a pastor for the admiralty, in the spring of 1741 at which time she described their tender and virtuous friendship and a strong soul-to-soul connection. He died in December that same year, however, following a brief illness. During her period of mourning Hedvig Charlotta Nordenflycht produced her better-known work: a collection of poems entitled Den Sörgande Turturdufvan, published in 1743. The poems treated issues related to the meaning of life and how God can allow the suffering of virtuous people using the subjective emotional form of expression which became her trademark. The poetry cycle, which displays similarities with the internal sacred literature of Pietism, is composed in lyrical form, rendering the poems with a musical quality which reveals that they were intended to be sung.

Hedvig Charlotta Nordenflycht struggled to find a lasting source of income for much of her life. When her father died in 1733 her older brother, Anders, became responsible for the inheritance. Following a number of failed business attempts, all of the family’s wealth was lost. Further, in 1751 Hedvig Charlotta Nordenflycht lost almost all of her belongings in the major fire which laid ruin to most of Norrmalm in Stockholm, where she was living. For many years she was also responsible for the upkeep of her mother and sister. At that time women faced limited options when seeking to earn an income, but Hedvig Charlotta Nordenflycht was able to do so through her writing. Her network of contacts was of central importance to her given that writers could not then rely on an expanding book market. However, she had a considerable talent for creating personal connections and finding patrons, including amongst parliamentarians and Queen Lovisa Ulrika. She also made money by writing occasional poems. The need for good contacts, patrons, and an income are all evident in her literary output and her dedications and soliciting letters revealed her strategies for making a living. From the 1740s onward her contemporary political poetry show that she sought and received patronage from aristocratic families within the ‘hattparti’ (hat party).

Hedvig Charlotta Nordenflycht became a very successful and treasured writer. She is the most productive of the Swedish female writers of the 1700s having made her literary debut when she was only a teenager. About half of her literary output comprises occasional poems; in this she was hardly unique but rather followed the common pattern of contemporary writers. The rest of her output was broad both in genre and in format: it included handwritten and printed works, prose, works on contemporary politics, odes, gestes, didactic poetry, lyrical (thus musical) poetry, ballads, bucolic works, plays, translations, poems for compilations and periodicals. In 1741 she collated her output for the first time in the handwritten publication known as the Cronstedska poemboken which she dedicated to her patron at Fullerö estate, Countess Margareta Beata Cronstedt. A few years later, in 1744, she published the first part in another collected edition entitled Qwinligit Tankespel. She published this volume under the pseudonym of Herdinnan i Norden, but the identity of the author is revealed in the dedication already. The volume is dedicated to a variety of noblewomen, many of them young, and the opening poem contains a blazing case for women’s rights to an education: “Fruentimbers Plikt, At Upöfwa Deras Wett”, followed by poems which deal with life perspectives and moral issues in different ways. The ensuing three volumes, which were published using her real name, comprise a range of texts, including moral-religious thoughts, translations, and occasional poems. It is worth noting that in a collected works the author takes on the role of main organiser. This was an innovation within eighteenth-century Sweden and had also been used by Hedvig Charlotta Nordenflychts female precursor Sophia Elisabet Brenner, who published her Poetiska Dikter under her own name. A theoretical discussion which advocates this new authorial role can be found in Tankar om Låfskrifter öfwer de Döde, published in 1749. This prescient type of publication seems to predict that authors would later begin to write for specific markets and for anonymous audiences.

In addition to her lyrical work called Den Sörgande Turturdufvan, or her later lyrical poems such as “Ensligheten”, “Til…”, and “Övfer en hyacinth”, Hedvig Charlotta Nordenflycht is also known for her poems on women’s issues, particularly her 1761 Fruentimrets Försvar, Emot J.J. Rousseau Medborgare I Geneve, which is in many ways a magnificent didactic poem written in Alexandrine verse. In it she polemicises against the enlightenment philosopher Rousseau’s view of women. This work was about to be translated so that it could reach a broader international audience when Hedvig Charlotta Nordenflycht fell seriously ill.

Hedvig Charlotta Nordenflycht’s texts are not infrequently interpreted as speculative or biographical in nature. Her later lyrical poetry has been read as evidence of the author’s alleged love affair with her younger friend, the economist and writer Johan Fischerström. However, when viewed beyond this narrow frame of interpretation her literary output is proof of a conscious and innovative style of writing. In terms of form she is passionate and her work demonstrates her talent for both rhetoric and poetry as well as the language of literary classicism. Her texts often deal with political, philosophical and religious matters. Many of her works are influenced by audacious thought processes and by her radical stance towards women’s issues; one can discern not just concepts of enlightenment philosophy but also pre-feminist thought. As her texts often deal with complex issues such as virtues, human existence, and questions of faith and morality, she can be included amongst the philosophical authors. Evidence of this can be seen in poems such as “En Dröm”, from 1745; “En liten skymt af omätliga Ljus Eller Tankar om Gud, Själen och Dygden”, from 1747, and “Skaldebref till Criton”, from 1754.

Hedvig Charlotta Nordenflycht clearly sought to make an impression as a patriotic poet, placing her oratory in Sweden’s service, such as in her poetry collections Den Frälsta Swea i fem sånger, from 1746, or Tåget öfver Bält, from 1753. The last ten years of her life she even held a direct position of influence on a national level within the belles-lettres circles when she became elected into the Tankebyggarorden society of letters, the first such institution in Sweden of which the members programmatically worked to improve the literary tastes of the general public, to raise the erudition of Swedes, and to spread the ideas of enlightenment and of literary classicism. Hedvig Charlotta Nordenflycht served as chair of the Tankebyggarorden for a year. She then served as hostess of the only enlightenment salon in Sweden, in its proper sense. In both these contexts she worked with two younger authors, Fredrik Gyllenborg and Philip Creutz, playing the roles of both patron and older colleague for them. Tankebyggarna published the three-volume Våra Försök, I-III, in 1753, 1754, and 1756; the members of the salon published material in Witterhets Arbeten, I-II in 1759 and 1762. The latter includes Fruentimrets Försvar and the prose work entitled “Fröjas räfst”, influenced by the ‘Précieuses’ of the 17th century, in which Hedig Charlotta Nordenflycht plays with alternative relationship forms for women and men.

Hedvig Charlotta Nordenflycht was admired by her contemporaries although literary historians often describe her as a sentient (female) writer rather than as the aware writer, rhetorician, and thinker that she actually was. It was not until later that interest in – and an understanding of – her complex writings was re-ignited.

Throughout her life Hedvig Charlotta Nordenflycht lived at a series of different addresses, mainly in Stockholm and its surrounds. In 1759 she was financially well-off enough to have a house built on the Mälaren lake, near the Sko convent, called the Lugnet farm. The house, in which she died the same year that she would have turned 45, was destroyed following her death. She is buried at the Sko convent cemetery. 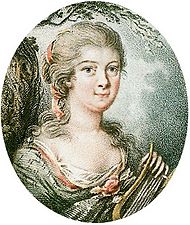