Ava Lagercrantz was an artist and a highly sought-after portrait painter who was active in the USA in the early twentieth century. She was commissioned to paint portraits of King Oscar II and King Gustav V.

Ava Lagercrantz was born in Karlskrona in 1862. Towards the end of 1866 she and her family moved to Stockholm where her father, Jacob Reinhold, had gained a new job. He held a naval post and was eventually promoted vice-admiral. Ava Lagercrantz displayed a talent for art at an early age. She honed her talent by studying with prominent artists both in Sweden and abroad. Her teacher in Stockholm was Kerstin Cardon, who ran her own painting school and who specialised in portrait painting.

Ava Lagercrantz lived in Paris during two distinct periods, initially from 1885–1889 and subsequently during 1893. In Paris she studied with well-known artists such as Jules Lefebvre, Tony Robert Fleury, G Boulanger, and Benjamin Constant. Her career rapidly took off and she exhibited her work at the 1888, 1889, and 1890 Paris salons. Her 1889 submission was a self-portrait which became one of her best known works. She won first prize in 1890 for the portrait she painted of her father.

Ava Lagercrantz specialised in painting portraits, flowers, and miniatures. Her creative expression involved a variety of techniques including painting in oils, pastels and miniatures. During her time in Paris one of the portraits she painted was of August Strindberg, who also intermittently lived in Paris. That portrait is on display at Dramaten in Stockholm.

Ava Lagercrantz spent the two decades between 1902 and 1923 living in New York where she primarily painted landscapes, as well as portraits and still lives with flowers. Her cousin was the Swedish envoy to Washington, Herman Lagercrantz. This personal connection served as a gateway to obtain portrait commissions from the celebrities of the day, not just within the diplomatic world but the world of opera as well. She thus began calling herself Ava de Lagercrantz as a way of demarcating her noble ancestry. She was included in the 1914–1915 year’s edition of Woman’s Who’s Who of America, revealing just how successful a painter she was. She returned to Sweden twice specifically to paint portraits of royalty, first of King Oscar II and second of King Gustav V.

In USA Ava joined an anti-suffragette organisation, the New York State Association Opposed to Woman Suffrage (NYSAOWS). Whether this reflected her own convictions or was done for practical reasons it was doubtlessly safer to hold that view with regard to the privileged customer circle she was moving in. Ava Lagercrantz did seem to have been an admirer of August Strindberg and if she was influenced by his complicated approach to the relationship between men and women, then perhaps her own beliefs were not too dissimilar from those of the anti-suffragettes.

In 1923 Ava Lagercrantz returned to Sweden and settled in Stockholm. A few years before her death, in 1935, she had an exhibition at Konstnärshuset. Today her work can be seen at the National museum. Ava Lagercrantz spent her final years in Paris.

Ava Lagercrantz died in 1938 and is buried at Galärvarvskyrkogården in Stockholm. 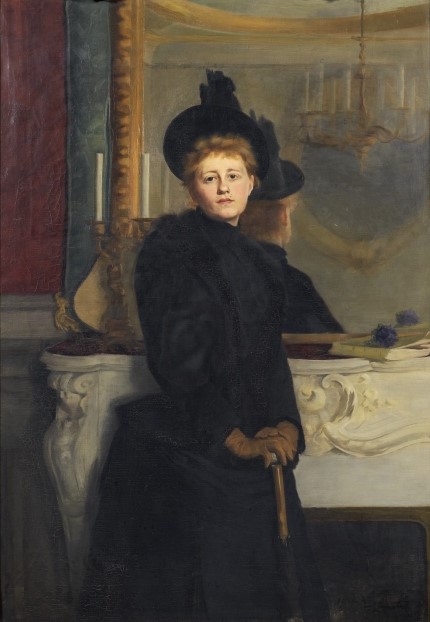