Hedvig Indebetou was an author, a playwright, and a translator who was active during the late 1800s and early 1900s.

Hedvig Sofia Amalia Indebetou was born at Forssa ironworks in Östra Vingåker, Sörmland in 1844. She was the youngest daughter of works owner and politician Carl Gustaf (Calle) Indebetou, the younger, and his wife Dorothea (Dora) Almgren. She had an older brother named Johan Govert and three sisters: Agnes, Ida, and Berta.

Of all her siblings it was to her brother Johan that Hedvig Indebetou was closest, even though he was 15 years her senior. Her surviving correspondence reveals how she looked up to him and that he was a source of support to her. Her desire to write was evident from an early age. When she was seven years old she and her brother jointly created “Kungadömet Udden” (the Kingdom of the Promontory), a veiled reference to Forssa which is situated on a promontory on Tislången lake. The two of them and their sisters played, wrote and created an imaginary world. Later Hedvig Indebetou devised plays, both on her own and with her siblings and cousins, which the children subsequently performed for family and friends. Similarly, when nieces and nephews were visiting she wrote songs that she dedicated to them. Nevertheless, quite some time would pass before she began to write seriously and get her work published.

During Hedvig Indebetou’s childhood it was unusual for women of the upper social classes to become educated and trained for professional careers as they were usually expected to marry and become housewives. Hedvig Indebetou, however, seems not to have been interested in married life and, in her letters to her father, she describes herself as shy and introverted, albeit also spoiled. She believed that her parents had not expected as much from her as they had from her older siblings. She wrote about her protected childhood and how this had made it difficult for her to form relationships. In their correspondence there is nothing to imply that her father, who was always loving and understanding, was in any way opposed to her life choices. Indeed he supported and encouraged her to continue writing. They exchanged thoughts and she benefited from her father’s vast command of historical facts when she initially began to write for various local history magazines. She was lucky in that her father lived a long life, only passing away in 1893 at the age of 92.

Hedvig Indebetou’s surviving correspondence contains nothing from her mother Dora. Presumably her mother’s far too early and tragic death was too painful for Hedvig Indebetou to be reminded of. Dora Indebetou passed away whilst staying with family in Stockholm, having probably contracted pneumonia on a visit with her daughter who was living in the capital. From the age of 15 Hedvig Indebetou had lived with her maternal uncle Knut Almgren, a silk manufacturer who lived in the capital city. She was only 19 when she lost her mother to the disease. It was her mother who had organised for her to live with her uncle and family, encouraging her to progress her plans to write. Hedvig Indebetou was training to be a teacher and the city offered employment possibilities and even the chance to realise her dreams of becoming an author. Living in Stockholm doubtlessly also offered her greater cultural stimulation and a richer social life.

Hedvig Indebetou trained as a private tutor and her correspondence reveals that she began to teach children of the wealthier kind in their own homes. During her spare time she also wrote fairy tales and short stories, all the while dreaming of making a living as a full-time writer. However, it was not easy to get published, particularly as a woman. Most women used pseudonyms rather than their actual names. When Hedvig Indebetou was published in the Linnea children’s magazine she used the non-descript name of “-ster”, which could stand for “moster” (maternal aunt), “faster” (paternal aunt), or sister. Despite this she was discovered by the editor in chief of Linnea, Carl Anton Wetterbergh, who was a doctor and an author in his own right, commonly known as “Onkel Adam” (Uncle Adam). He approached Hedvig Indebetou and they formed a long-lasting friendship and worked well together.

It was thanks to Carl Anton Wetterbergh that more of Hedvig Indebetou’s short stories and fairy tales were published. Indeed, he probably encouraged her to begin translating English-language children’s books. Hedvig Indebetou was a skilled linguist, particularly in English, which was somewhat unusual at that time. Some of her translations include Kate Douglas Wiggin’s girls’ book Rebecca of Sunnybrook Farm, published in 1904, and Louisa May Alcott’s Under the Lilacs, published in 1887. Taking on these translation jobs meant that she could finally stop working as a tutor.

Hedvig Indebetou took her inspiration from the natural landscapes of her childhood home in eastern Vingåker. Her fairy tales always included vivid descriptions of forests and countryside areas and the interaction between forest life and humans feature regularly in her stories. She also wrote fables, such as Hönan som ville flyga and other tales, in which dead things are brought back to life, implying that Hans Christian Andersen served as a major source of inspiration. Her work also displayed a mix of genres, as was common in the 1800s. This is perhaps best seen in her well-known book Vintergröna, published in 1880, where stories alternate with poetry and songs. Hedvig Indebetou paid tribute to the seasons, particularly – as reflected in the book’s title – to the transition from winter to spring. Winters were often harsh and difficult in Sörmland – when it got really bad Forssa could be cut-off for days at a time. However, winter could also bring the joy of sleigh-rides in good company and ice-skating on frozen lakes. In the poems winter is contrasted against the longed-for season of spring, which brought great happiness when it finally arrived.

The 1884 collection Ängsblommor includes motifs from Hedvig Indebetou’s local area, which she came to miss deeply after moving to Stockholm. In that collection the short story “Käll-ådern” describes the local countryside around Forssa, albeit under the fictitious name of “Skogsjö”. Hedvig Indebetou’s letters often mention her longing for her childhood home, the fresh air, the beautiful countryside, Tislången lake with its cliffs, and the forests full of birds and other animals. She spent her summers there and always celebrated Christmas at Forssa in the company of her family and other relatives. However, everything changed in 1900 when her beloved brother Johan Govert fell ill and died, a development she found very hard to deal with, particularly having lost not only her father but also her two sisters Agnes and Ida a few years earlier. Carl Anton Wetterbergh had also passed away in 1889 and this latest loss probably left her feeling quite alone. In addition to all this Johan Govert’s eldest son had no desire to take over the ironworks and it then passed into the hands of a cousin named Robert Almgren instead.

In 1904 Hedvig Indebetou had a story aimed at a mature readership and entitled “En vän” published in Idun magazine. It tells of a princess who first loses her mother, followed by her father, and then a cousin who takes over the castle and the kingdom, causing the princess to be moved to a smaller castle further away. The story blatantly bears autobiographical overtones. Perhaps Hedvig Indebetou felt cast out of her family home and the surrounding natural beauty, which she so loved. The longing for her absent parents is clear in the story and perhaps it was only then, having turned 60 years old, that she was able to express it in words.

Hedvig Indebetou lived a long life, as her father had done, dying in 1933, just three weeks after having turned 90. She is buried at Östra Vingåker cemetery. 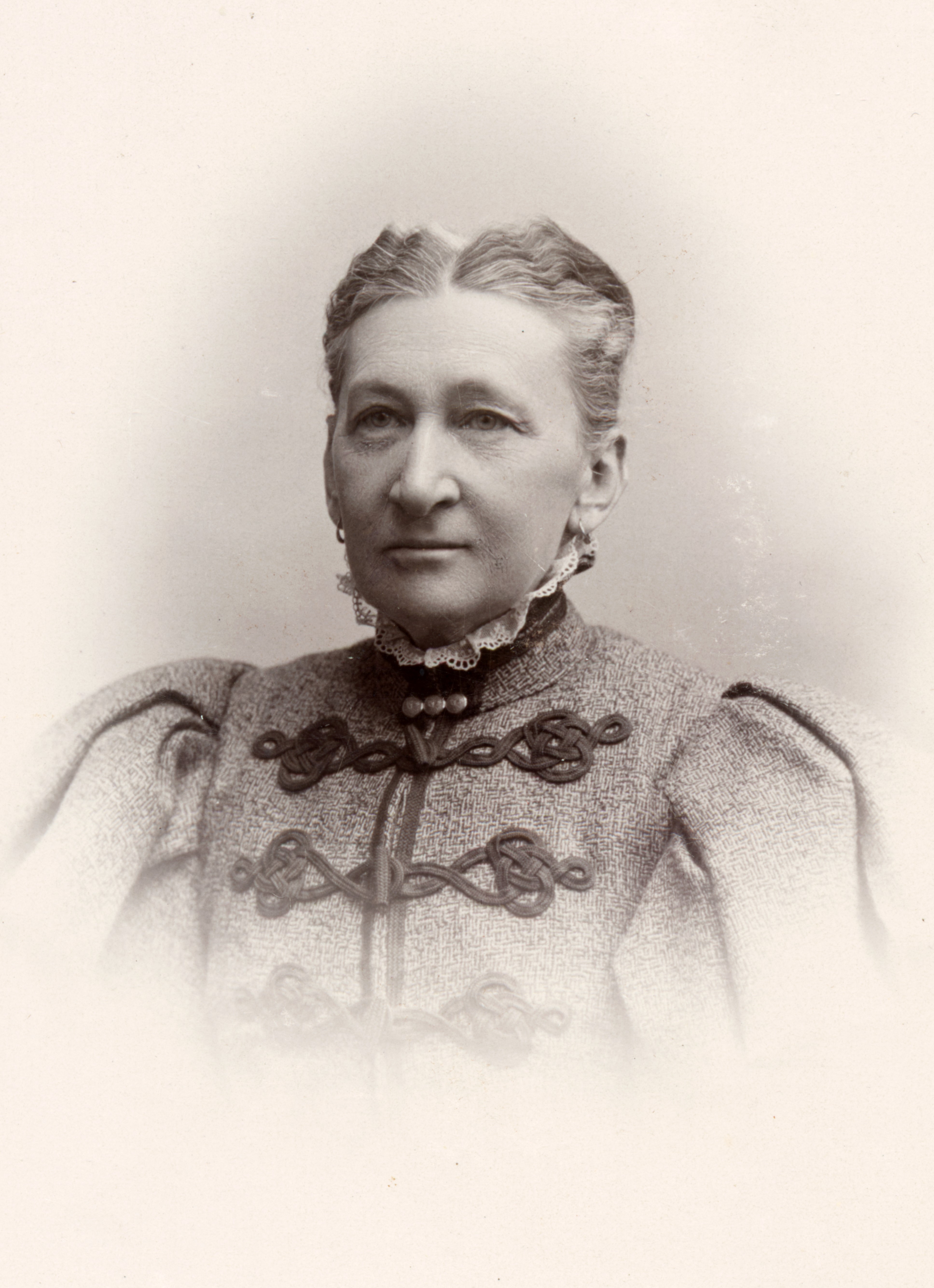