Helena Nyblom was an author, a cultural writer, and a pianist. She wrote plays and literary fairytales and her musical proficiency served to inspire several of her contemporaries who were composers.

Helena Nyblom was born in Copenhagen in 1843. She was the daughter of Jörgen Roed, professor of art at Det Kongelige Danske Kunstakademi in Copenhagen, and Emelie Amanda Kruse. Her childhood home served as a gathering point for many of the artists, writers, and musicians of the day. Following her marriage to Carl Rupert Nyblom, a literary man and member of the academy, in 1864 Helena Nyblom moved to Uppsala where her husband was appointed professor of aesthetics in 1867.

The couple’s Uppsala home quickly became a gathering point for contemporary artists from all over Scandinavia. Helena Nyblom served as the focal point at these meetings. Her piano-playing skill inspired the likes of Wilhelm Peterson-Berger and Emil Sjögren, both composers. King Oscar II’s sons also attended these gatherings, as did Prince Eugen, who became a close friend of Helena Nyblom’s.

The Nyblom family, which numbered six children, struggled financially and one of the reasons that Helena Nyblom began to write was in order to generate income. She was a critic of the modernist breakthrough and had no time for the plays of Henrik Ibsen. She did not have time for Anne Charlotte Leffler or Alfhild Agrell either. However, she was one of the first to laud Selma Lagerlöf on the release of the latter’s debut work and she had extensive contact with Ellen Key.

Helena Nyblom wrote novels and lyrical poetry, as well as a number of plays, such as Det ringer! published in 1910, which made fun of the meaninglessness of a telephone-centred society. She began to write literary fairy tales during the 1890s, and they came to play a part in her literary breakthrough. She made cultural commentary contributions to many of the most-read journals such as Idun, Nordisk Tidskrift för vetenskap, konst och industri, Ny Svensk Tidskrift, and Ord&Bild. She converted to the Catholic faith in 1895. Once her husband retired the couple moved to Stockholm.

Helena Nyblom died in Stockholm in 1923. 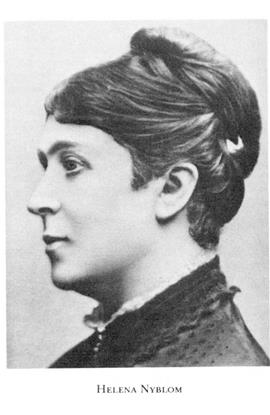