Helmy Hansson was a prominent musician and a ballad-singer from Dalarna (the Dales) who was active from the 1950s until her death in 1993.

Helmy Hansson learned an extensive fiddle repertoire from her father, Hjalmar Blomfeldt. Her father, who worked at the Domnarvet iron works, was one of the founder members of the Stora Tuna amateur musicians’ group. Later Helmy Hansson took over the role as lead musician in the group. Even as a child she would accompany her father to musicians’ gatherings and similar situations. When her father would play a tune she was allowed to play along.

In 1934 Helmy Hansson married Edvin Hansson from Gustafs, where the couple subsequently settled. She continued to develop her fiddle-playing there. There was a German fiddle-instructor who regularly visited the place from whom Helmy Hansson took lessons. Helmy Hansson also expanded her fiddle-playing expertise by travelling with her husband throughout the Dales region. They would seek out the most eminent fiddlers of their day: Gössa Anders, Olof Tillman, Carl Gudmundsäter, Evert Åhs, Hjort Anders, and Anders Frisell. Helmy Hansson would record them on tape and then teach herself their tunes afterwards. After her death these recordings, which she had inventoried and systematically organised, were donated to Dalarnas museum.

Towards the end of the 1940s an attempt was made at setting up an amateur musicians’ group in Stora Tuna but it was not until 1950 that anything formal came of it. Helmy Hansson and her father were members from the outset. Five years later she was elected onto the board of Dalarnas Spelmansförbund (the Dales regional musician’s association), for which she served as treasurer for thirty years. She and Knis Karl, the association’s chair, worked hard to revitalise Swedish folk music and to strengthen the group.

It took some time for Helmy Hansson’s musicality, fiddle-playing, and singing talent to be noticed beyond the musicians’ circles. The younger generation’s developing interest in old ballads served as a catalyst for Helmy Hansson’s recognition. Thanks to the fact that Helmy Hansson was both a singer and a musician and also collected folk music she was able to leave a significant musical cultural legacy behind which remains in use and is still listened to.

Helmy Hansson died in 1993 in Borlänge. She is buried at Stora Tuna cemetery. 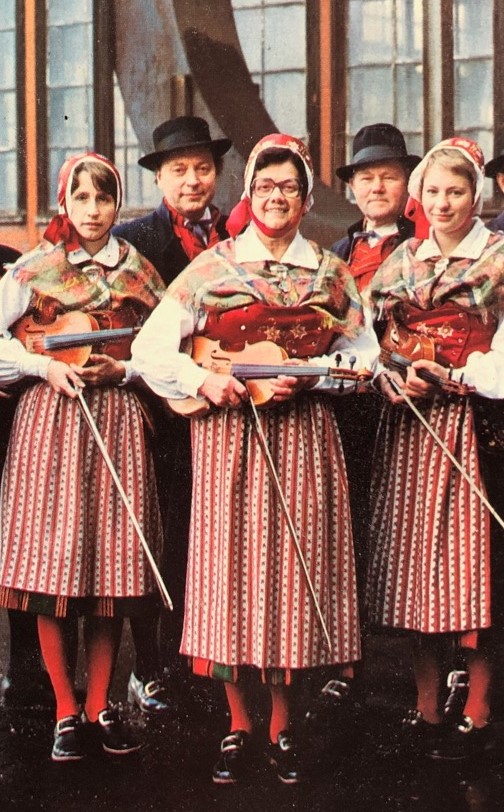