Hilda Andersson was a nurse, missionary and author. After completing her missionary assignment in China, she settled in Jerusalem in 1927 where she was active until her death.

Hilda Andersson was born on 29 December 1888, in Kärråkra outside Hässleholm. When she was thirteen, her mother died and Hilda Andersson had to take responsibility for home and household until she left her parents’ farm. The family then consisted of her father and elder brother who were pietistic Christians. After studies in Katrineholm and Borås, she qualified as a nurse in 1916 at the Sahlgrenska hospital (now Sahlgrenska Universitetssjukhuset) in Gothenburg. She moved to the USA in 1917 and studied languages while working at hospitals.

She was sent out by the Augustana Synod in 1918 as a missionary to China. She worked at a clinic in Xuzhou in the province of Jiangsu among other places. Conditions were poor and working conditions hard. After local unrest in 1927, she returned to Sweden. During a previous visit to Palestine, she had decided to settle there. Through an inheritance, she was able to build a house on the Mount of Olives that she named Svenskbo. Jerusalem’s climate with dry, warm summers suited both her health and her interests. She eventually started cultivating her plot of land.

Her main reason for living in Jerusalem was however religious. Hilda Andersson saw her presence in Jerusalem as a vocation. She wanted to live in “The country where God’s holiness and love has been revealed to all mankind.” She opened her home to Swedish travellers to Palestine and to missionary colleagues. Her hospitality was legendary and she arranged parties that facilitated meetings between different kinds of people. She had mastered Arabic and helped her neighbours medically and with good advice.

Hilda Andersson saw Svenskbo as a place where she was able to tell visitors about the country and the significance of the Jewish immigration. Her house soon became a popular place to visit. Among Swedish visitors may be mentioned Alice Tegnér, Pär Lagerqvist and the crown prince couple Gustav Adolf and Louise Mountbatten. The more locally established Nås Swedes from the American colony considered her however as a rival. They were also sceptical to her evangelism.

In her book Sett från Oljeberget from 1937, Hilda Andersson describes her life in Jerusalem, her travels and meetings with the country’s cultures. Like many other missionaries, she was ethnographically interested and described in great detail the customs and habits of the Palestinian Arabs. Since their customs were considered to be descended from biblical times, the descriptions were framed with biblical references. She also described modern Jewish life, from kibbutzes to city life. She experienced the increasing Jewish presence in the country as the fulfilment of biblical promises. Her eschatological interpretation of texts and world happenings were shared with representatives from the Swedish Israel mission. Its director, Birger Pernow, stayed at Hilda Andersson’s home during the spring of 1934. For a period, the Swedish Israel mission also supported her work.

Hilda Andersson belonged to the parish of Christ Church, inside the Jaffa Gate in Jerusalem. Christ Church was a gathering place for English missionaries from the organisation The Church’s Ministry Among the Jewish People (CMJ), that also ran a hospital in the city. In this congregation, Hilda Andersson met people with the same Christian vision. The congregation consisted of missionaries and also of Jews who had converted to Christianity. Among her contacts were the author Hannah Hurnard who worked for CMJ and the Finnish missionary Aili Havas. The Swedish deaconess Greta Andrén also belonged to the congregation for a time. Hilda Andersson looked upon the increasing unrest in the country with bitterness. From her vantage point on the Mount of Olives, she was a witness to how convoys were shot at and how people fell victim to shooting. She accused the British for having betrayed the Jewish striving to create a country for themselves and for supporting the Arab struggle against the Jews. Her political sympathies were with the Jews. At the same time, she considered that the fighting was part of the final battle for the restoration of the Jewish people and the return of Jesus.

In her posthumously published book Kampen om det heliga landet, Hilda Andersson recounted how western representatives successively left the country before the withdrawal of the British. Her Jewish Christian friends were subjected to expulsion and harassment. Barricades and fences were visible everywhere. Food transports were plundered. Electrical and telephone lines were cut. She also described her own vulnerable position on the Arab side as a lone Swede with Jewish sympathies. Diplomats, church dignitaries and her Jewish friends all exhorted her to leave Svenskbo.

When the situation escalated further after the United Nations’ decision to create two states in November 1947, Hilda Andersson decided to leave Jerusalem temporarily and travel to Ethiopia. Her planned journey in February 1948 could not however be undertaken on account of a mistake with her visa. Hilda Andersson returned to Jerusalem and stayed with Jewish Christian friends. When the house was shot at with grenades, she returned to Svenskbo. Hilda Andersson hoped that her good relations with both sides would protect her, like her faith in God.

After having attended the service on Sunday 25 April 1948, Hilda Andersson fell victim to a sniper. She was killed by several shots as she was walking back to her home on the Mount of Olives. Her death was never investigated, probably because she was one of many victims during a chaotic period.

The speculations about her shooting have been many. Suspicions have been aimed at Arabs and British allies of the Arab legion. According to Hilda Andersson, she was visited by the English military some weeks before she was killed. They wanted to persuade her to leave the country. Her colleague Hannah Hurnard noted in her diary that Hilda Andersson used to deliver food packages to Jewish friends in Jerusalem. These provisions came from the Arab side. Despite information on the risks, she continued her deliveries. They were a probable cause of her death.

On account of the fighting, she had to be buried temporarily on the property of the American colony. She was given her final grave in the Nås residents’ cemetery on Skopus hill, not so far from her home. Before her death, she had handed over Svenskbo to the Norwegian Carmelite Institute, which managed the house under the Jordanian administration in 1949–1967. The property was bought in 1990 by Chanan Porat, one of the Israeli settlers’ movement’s foreground figures. Nowadays it houses the yeshiva Beit Orot, a Jewish religious college with links to the settlers. 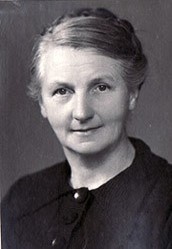