Hilda Borgström was the first Swedish film star to gain international fame. She was also a successful stage actress and a much-loved drama teacher at Dramatens elevskola (the Royal Dramatic Theatre’s stage school).

Hilda Borgström was born in Stockholm in 1871. At the age of nine she became a pupil at the Opera ballet school. She transferred in 1887 to Kongl. Stora Theaterns elevskola, which at that time was part of Kungliga Musikaliska Akademien (the Royal Swedish Academy of Music). Some of the famous teachers working there included Signe Hebbe, Knut Almlöf, and Frans Hedberg. The ballet pupils were sometimes allowed to watch the Opera school pupils perform. This inspired Hilda Borgström and her friends to create their own plays — each one beginning with the line “Klockan är så mycket och Han har inte kommit!”(“It is so late and he still hasn’t arrived!”).

Hilda Borgström was a member of the Rydberg theatre company when she made her stage debut in 1888, playing Elfrida in Askungen. Following a number of different engagements, including at Svenska Teatern (the Swedish theatre) in Helsinki, Hilda Borgström worked with the influential actor and director Anders Lindberg at Stora teatern in Gothenburg from 1891 to 1893. Her breakthrough performance there was playing Hilde Wangel in Henrik Ibsen’s play Byggmästar Solness. Her interpretation of that role was noticed not only in Gothenburg but also Stockholm, due to a guest performance there at the Opera, temporarily housed at Svenska teatern. Thereafter she became an important name for theatre director Albert Ranft, appearing, with a few breaks, in productions both in Gothenburg and at his various Stockholm theatres — including the Vasa theatre — until 1900. While working with Ranft in Gothenburg Hilda Borgström played roles such as Cyprienne in Victorien Sardou’s Vi skiljas, opposite Gustaf Fredrikson. Later it was believed that she had adopted Fredrikson’s acting style both in terms of the way she moved on stage and in her delivery of lines. From 1900 until 1912 she was employed at the Royal Dramatic Theatre (colloquially known as ‘Dramaten’), initially at the so-called ‘old Dramaten’ at Kungsträdgårdsgatan. One of the roles she played there was the title role in Zaza by Pierre Berton and Charles Simone. This was her first so-called bravura role.

On Hilda Borgström’s 75th birthday she received this written tribute: “she has portrayed elegant, beautiful, and easy-going ladies in French comedies, she has played stylistically pure classic roles and crazy, colourful caricatures, and she has been one of our top Strindberg actresses”. She enjoyed a long career within a variety of different genres, from operettas to ‘boulevarde’ comedies such as Victorien Sardou’s Bérangère in Odette (1890—1891 and Hildur in Frans Hedberg’s translation of Ljungby Horn; cheeky ‘soubrettes’ in Molière’s comedies, such as Toinette in The Imaginary Invalid (1892—1893) and Dorien in Tartuffe (1892—1893). She also performed more complex characters such as Hilde Wangel in Henrik Ibsen’s Byggmästar Solness as well as the demonic mother in August Strindberg’s play Pelikanen. During the period of 1908 to 1938 she performed 78 different roles at Dramaten alone.

Hilda Borgström’s skill as an actor was characterised by her ability to insinuate, both in terms of line delivery and her facial expressions. On the occasion of her 50th birthday the written tributes included this one: “she is one of our genuine story-tellers. She never stumbles in her lines and the chemistry that existed between her and Gustaf Fredrikson in their time served as an excellent display of the art of spoken delivery, in that not only were their words heard but every aspect of the dialogue was accurately delivered.” According to the actress and director Mimi Pollak Hilda Borgström’s voice sounded like highly-polished crystal. Daniel Fallström, the theatre critic, wrote admiringly: “natural — natural whether performing a crazy French comedy or playing the female lead in, for example, a piece as serious as Didring’s Högt spel. Her portrayal of Signe was not just enchanting, but she also produced the most convincing delivery of both love and pain, anger and shame.” A recurring characterisation of her acting in the contemporary press credits her with “wisdom, clarity, and intelligence”. Humour was another word frequently used to describe her role performances.

At the beginning of her career Hilda Borgström was primarily considered to be a comedic actress, whose measured but accurate feel for satire lent a savoury aspect to her role interpretations. Her fervour and geniality was often noted. Nevertheless, her dissatisfaction with the roles she was given led her to leave Dramaten in 1912. Apparently that same year Ranft offered her 9,000 kronor for a six-month engagement, but she successfully raised the offer to 10,000 kronor. Following several guest performances she became the director of her own company and took on the role of Nora in Henrik Ibsen’s Ett Dockhem in 1916. She had wanted to play this part for many years but neither Ranft at Svenska Teatern nor Tor Hedberg, the head of theatre at Dramaten, had been willing to give her the role. Hilda Borgström told a journalist: “You would not believe how wonderful it feels to throw yourself into a real role after all the pussyfooting around that came with being employed.” The part of Nora’s husband Helmer was played by Ernst Eklund. Hilda Borgstrom toured throughout Sweden before becoming the director of Blacheteatern in December 1916. She wanted to turn Blancheteatern into “an intimate stage that was of as high artistic quality as possible”. She became co-director, along with Ernst Eklund, in 1917. In 1919 she took the company on tour across Sweden performing Lessing’s comedy Minna von Barnheim, in which she played the part of Franziska, a mischievous and outspoken chambermaid.

In 1920 Hilda Borgström returned to Dramaten. Her first performance as a returning star was in the part of Mrs Norma McIntyre in Gudmunder Kamban’s play Vi mördare emellan. She increasingly began to play roles of middle-aged and even elderly women, such as the dry but complex loyal servant Boman in Hjalmar Bergman’s Swedenhielms in 1925. This production ran for 59 performances. Hilda Borgström also won a lot of plaudits for her interpretation of Mother in Strindberg’s play Ett Drömspel. This was a much talked-about production directed by Olof Molander, for which Erik Skawonius and Isac Grunvald were responsible for the scenography. In 1928 Hilda Borgström performed in another Olof Molander production as mother Åse in Henrik Ibsen’s Peer Gynt. She departed from Dramaten in 1938, her final appearance being in the role of Boman in Swedenhielms in 1942.

Hilda Borgström made her debut as an actress on the silver screen in 1912. She appeared in Ett hemligt giftermål eller Bekännelsen på dödsbädden, directed by Victor Sjöström. She appeared in several films over the years until 1951, just two years before she died. She saw no conflict between film and theatre. During 1944 she was involved in 10 films, including Hets, a production of a manuscript by Ingmar Bergman which was directed by Alf Sjöberg, and Appassionata, directed by Olof Molander. She quickly became a much-noted film actress after her successful portrayal of the title role in Victor Sjöström’s 1913 film Ingeborg Holm. She performed the tragic female lead in her own muted style of acting and gained international acclaim for her interpretation.

Hilda Borgström had great success playing the part of David Holm’s tortured wife in Körkarlen in 1921, directed by Victor Sjöström. Just like Ingeborg Holm, this film is considered to be one of the masterpieces of Swedish silent movies. Hilda Borgström often played the part of a tired, worn out, and struggling female character. Her appearance, with her animated, aging face, her precise enunciation, her natural treatment of dialogue and her minimalist acting style is apparent in all the major and minor roles she performed on film. During her later years she became stereotyped as an old wise woman and loyal servant, such as mother Sigga in the 1942 film Rid i natt! and the loyal servant in the 1946 film Driver dagg, faller regn. Another typical role was the icy, ill-tempered elderly women with a sardonic sense of humour, like Grandmother Maria in the 1948 film Eva. In total she appeared in 81 films, including Tomten in which she, with her distinctive, slightly hoarse voice with an undertone (she was an asthmatic) and crystal clear diction, read the poetry of Viktor Rydberg. Up until the early 2000s this film was still shown every Christmas on Sweden’s public service TV network SVT.

Hilda Borgström also appeared regularly on the radio in productions by Radioteatern. She continued working with Radioteatern even after giving up appearing on the stage and the silver screen. In 1938, following a 57 year career as a stage actress, she officially retired from the theatre. She carried on appearing in films and on the radio whilst also teaching drama at Dramaten and privately to her own students, from 1928. She took over the role as instructor at Dramaten from Olga Björkegren in 1930, remaining in situ until 1940. Hilda Borgström became an important role model for later generations of actors — Georg Rydeberg, for example, expresses his gratitude towards her in his memoires. In 1906 Hilda Borgström was awarded the Litteris et Artibus medal in recognition of her artistic endeavours. In 1936 she was also awarded the Danish Ingenio et Arti medal in gold. Hilda Borgström was a humble individual who kept her private life private. She never married, but had a daughter. Many journalists considered her a difficult subject to interview. Inga Tidblad, amongst others, has testified to her ironic sense of humour and down-to-earth attitude with regard to her profession. Hilda Borgström spent her holidays at her cottage Soltomta in Jämtland, where she also provided podiatry services to the elderly in her village.

Hilda Borgström died in Stockholm in 1953. 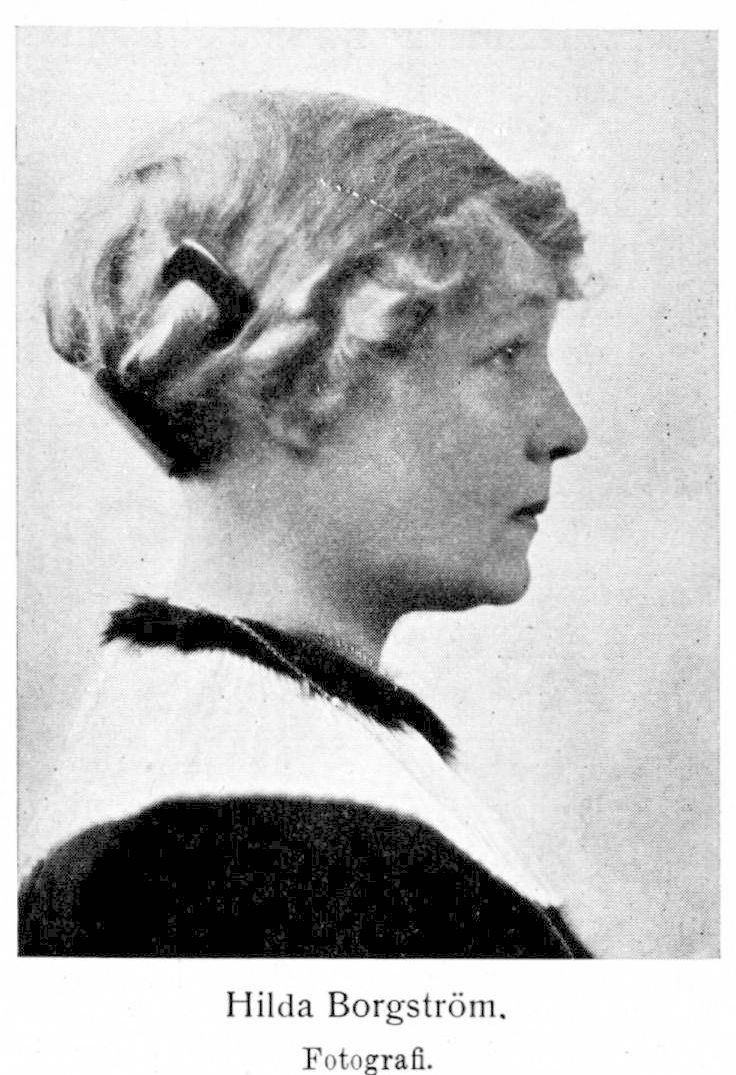