Hilda Pihlgren, commonly known as “Pila-Britta”, was a Västerås midwife who was said to have delivered 7,300 children during a period spanning over four decades.

Hilda Pihlgren was born in Älvsbacka, Värmland in 1873. She was the illegitimate daughter of a maid named Augusta Larsson. Her father was Hjalmar August Pihlgren, the son of a merchant, and the couple already had an older daughter. Hilda Pihlgren spent her earliest years living with her maternal grandparents whilst her mother was in Gothenburgh training to become a midwife. A few years later her mother became employed as midwife in Norra Råda. Living accommodation was included as part of the job and Hilda Pihlgren was finally able to live with her. Not long after that her mother married a painter named Gustaf Tempelman in Norra Råda, but she nevertheless carried on working.

Hilda Pihlgren spent the rest of her childhood in Norra Råda, where she grew up along with six half-siblings. She had a positive relationship with her siblings and her step-father. Her mother, who is said to have practically functioned as a local physician, inspired not just Hilda Pihlgren but also her sister Augusta Pihlgren (later married as Hedlund) to follow in her footsteps. Hilda Pihlgren went to Stockholm to train, and at the age of 24 she gained her qualifications at Barnmorskeläroanstalten (midwifery institute) at Södra barnbördshuset (maternity unit) in Stockholm in June 1898. She then spent the next three months gaining practical experience at Södra barnbördshuset. This gave her a special qualification which allowed her to use delivery-room instruments. Hilda Pihlgren was described, in a letter of recommendation written by the director, as “unusually speedy and skilled in her calling”. She then served as her mother’s replacement in Norra Råda, assisting in 25 deliveries of babies.

In early 1899 Hilda Pihlgren took her first independent steps into the employment world. She was appointed a fulltime municipal midwife in Boglösa, Vallby, and Lillkyrka near Enköping. After eight months and 34 deliveries she resigned from her post in order to seek work in a larger community. She chose Västerås and remained loyal to that town for the rest of her life. During her initial period there she shared living accommodation with a former student friend named Maria Larsson.

Hilda Pihlgren initially worked as a private midwife in Västerås. At that time there were around eight midwives in the town, two of whom were employed by the municipality. In addition to delivering babies the job entailed providing health care for children and mothers-to-be and to administer vaccinations. In March 1913 Hilda Pihlgren was appointed as Västerås’ second midwife following the departure of Maria Larsson. When she had been a private midwife her income had come directly from her patients but even after becoming an official employee of the town the majority of her salary came from extra payments from her patients.

Following the passing of a new law the midwifery enterprise adopted new regulations during the late 1920s. Hilda Pihlgren, by then 47 years old, was appointed district midwife and became responsible for one of the three newly-established districts in the town. Her working and pay conditions both improved, although her working hours naturally remained irregular. Being permanently on-call meant that she could not take extended periods of time off. It was not until 1928 that she began to enjoy the annual benefit of three successive weeks of summer holidays. In order to be able to transport herself and her heavy midwifery case she gained a driver’s licence in 1922. She was the first woman to do so in Västerås. She purchased a Model T Ford and probably became the first mobile midwife in Sweden.

Following her retirement in the summer of 1933 Hilda Pihlgren often found herself called on to serve as replacement district midwife for both shorter and longer periods. At the same time she returned to her private practise and remained active as a midwife right up until her death. She is said to have remained exceptional at her job despite her age and kept herself well-informed about new scientific sources and developments within the trade.

Västerås community underwent major changes during the 44 years that Hilda Pihlgren worked there. She herself described how not just the hygiene standards, but also living conditions, and financial situations of families improved considerably in the period. The town also expanded markedly whilst its population nearly quadrupled. When she started out in her profession as midwife most deliveries of babies occurred within the family home. It was not unusual for her to attend 200 deliveries a year. Four decades later nearly 80 percent of women in Västmanland delivered their babies in hospital. In an interview Hilda Pihlgren gave on the occasion of her 70th birthday she stated that she had assisted in 7,300 deliveries and on more than one occasion she found that she had assisted both the child, its mother and its maternal grandmother to come into the world.

Hilda Pihlgren became a well-known and treasured member of the town’s inhabitants thanks to her lengthy career in Västerås. There are numerous anecdotal stories about her. Both locals and the press referred to her by the nickname of “Pila-Britta”. These various stories unanimously describe her as an excellently skilled midwife who possessed great energy and a pleasing and cheerful nature. However, she could also be resolute and forceful when the situation required it. Further, her straightforward method of speech is also well testified to. She was thoughtful and generous when dealing with her patients and it is said that she brought baskets of food and clothes for the poorer families. It was not unusual for her to keep an eye on the children she had helped to deliver and to follow their developments through life.

Despite Hilda Pihlgren’s extensive activities she also found time for associations. From 1900 onwards she was a member of the trade union Västmanlands läns barnmorskeförening, and within the local Västerås branch she served as chair and was a member of the board for many years. She was also active in the local suffragette movement and was on the board of Föreningen för kvinnans politiska rösträtt (FKPR) from its inception until 1913. At that date she resigned from her position due to lack of time. From 1907–1925 she held a municipal position as temporary member of the town’s foster child agency. From 1916 until her death she was also a member of a charitable agency.

Hilda Pihlgren was active right up to the end of her life. Towards late 1943 she fell ill with pneumonia. She died a few months after her 70th birthday due to heart complications and is buried at Hovdestalunden cemetery in Västerås. At the funeral held in the cathedral her life’s work was roundly celebrated and she was described as “one of the town’s good angels”, who afforded comfort and hope to people simply through her presence.

A street in Västerås has been named after Hilda Pihlgren, namely Pila-Brittas gata. 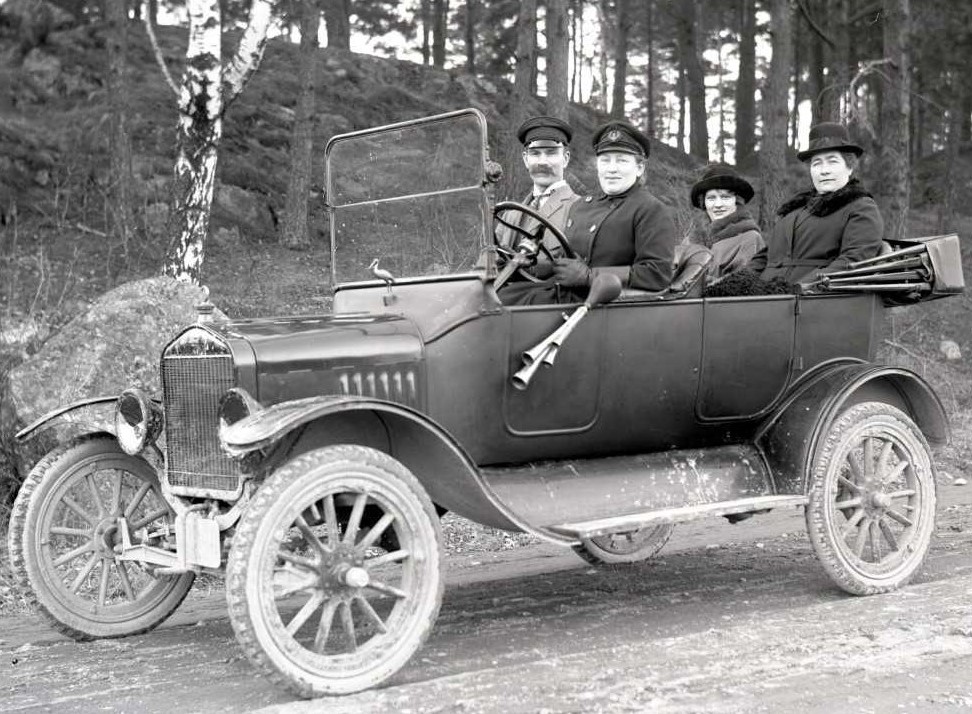 Hilda Pihlgren in the driver’s seat of her car with Gustaf and Anna Ekstam and Ellen Gunnarsson, 1923. In front of the windshield is a mascot in the shape of a stork. Photo: Emil Wijgård (1884-1974), Västerås stadsarkiv