Hilda Olsson – under the name of Kerstin Hed – was a productive and well-known lyricist both in her local area of Dalarna and nationally. She wrote 16 poetry collections, a few books of prose, and three of her own edited collections of lyrical works.

Hilda Olsson was born in 1890 into an agricultural worker’s home in Hamre in Hedemora. Her education, after public school, comprised a summer course at Tärna highschool. She was also active within the abstinence, popular education, and farmers’ movements. In 1916 she married Anders Olsson from Rättvik and in 1919 she took over Kersgården, the farm where she was born, in Hamreänger. In 1946 she and her husband and two children moved to Matsbo, which was also situated near Hedemora.

She created her pseudonym of Kerstin Hed by combining elements of Kersgården and Hedemora. This in itself reveals her rootedness in her home parish. In her poems Kerstin Hed, whom she often reference, depicted the agricultural world she was born into and lived in. She was formally educated in the spirit of Karlfedt and Carl Larsson i By, but still found her own voice in the poetic landscape of Dalarna.

Kerstin Hed was part of the so-called Hedemorapress, and in the 1930s its central core comprised Paul Lundh, Nils Bolander, and Martin Koch. Koch’s Lagmansgård in Hedemora served as a place to meet and discuss a variety of topics, but it never took the form of a literary school with a unified programme. It was really a social club. Karl-Erik Forsslund and Carl Larsson i By also belonged to the most important people within the Dalarna cultural scene, and Kerstin Hed had a lot in common with them.

Kerstin Hed undertook her writing alongside her farming work. Her poems exhude an affinity to the anonymous simple people of the rural world which formed Kerstin Hed’s reality, expressed in a simple and unembellished manner. The language was devoid of dialect and bore no traces of one-track minded local poetry.

Kerstin Hed’s poetry took a deeper turn during the Second World War and adopted a darker tone. Jordens skönhet was published in 1942 by the J.A. Lindblad Bokförlag. From then on Kerstin Hed stayed with the LT Förlag AB who published her poetry collections Över sjunkna land in 1945, Träblåsare in 1948, Ord från de stumma in 1952, Vandrare i strandskog in 1953, Skådebana in 1956, Kopparslanten i källan in 1959, and finally Tre orgelpipor in 1960.

Kerstin Hed’s two prose books – the 1955 collection of short stories entitled Kvinnor vid älven and Glimtar över Sotdalarna, a cultural-history type book, from 1958 – reveal the breadth of her expression. It is worth noting that while she was still alive substantial selections of her poems were already being published in 1947 in Sång över markerna, in 1950 in För flod och vind and in 1951 in Blommande mark.

Several of Kerstin Hed’s poems have been set to music by the likes of Hugo Alfvén and Oscar Lindberg. She also submitted material to local newspapers and journals and to publications of various people’s movements. She wrote poems about the importance of study groups and was herself a veteran of the IOGT-NTO association 1318 Elfblomman.

The 1929 book Svenska folkförfattare emphasises how “very few poets of our current generation have meant as much for the majority of folk as Kerstin Hed”. The familiar rhythm and the folkloric aspect of the poems made them accessible to a wide readership. The well-known travelling song ‘Spel-Olles gånglåt’ from the 1923 Arv poetry collection can be viewed as a female parallel to the long-established song ‘Vi gå över daggstänkta berg’ by Olof Thunman.

In his 1938 book on Dalar poets Gunnar Furuland calls Kerstin Hed ‘our only farmer poetess’. This label is still somewhat relevant albeit in 1954 Sigvard Cederroth modified it in Perspektiv: Kerstin Hed was also an author who, in her own unobtrusive way, gave the silent and hidden individuals of the agricultural communities a voice.

Hilda Olsson died in Hedemora in 1961. She is buried at Hedemora cemetery. A decade after her death Efterlämnat was published, and in 1984 Dikter i urval was published. 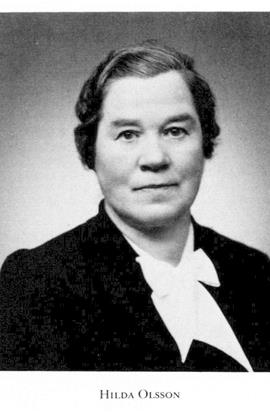