Hilda Sachs was a pioneer in the women’s movement. She started her career as a journalist.

Hilda Sachs was born in 1857 in Norrköping. She was the youngest of four daughters, and her father was a businessman. She graduated from Högre lärarinneseminariet (the advanced teacher training programme) in Stockholm in 1881 and worked as a teacher at girls’ schools until she got married in 1886. Her husband, Danish-born Karl Sachs, was established as “Stockholm’s most fashionable florist” and had his shop on Drottninggatan. He was the cousin of Georg, Edvard and Ernst Brandes, and shared their cultural radicalism and political free-mindedness. The Sachs couple socialised with newspaper men, authors, and politicians of the left. Their nearest friends included the journalist and agitator Hinke Bergegren. The Sachs couple had two children.

After Karl Sachs’ death from severe blood poisoning in 1893 at only 32, Hilda Sachs’ friendship with Hinke Bergegren developed into a romantic relationship. In the summer of 1895 they travelled to Paris and Hilda Sachs spent three years there working as a foreign correspondent for Dagens Nyheter and Nya Dagligt Allehanda. After their return to Sweden she was elected into Publicistklubben, which at the time only had about five percent female members. Another indication of her public recognition was when Nya Dagligt Allehandla sent her to the international journalists’ conference in Rome in 1899, as the first Swedish woman. As a journalist Hilda Sachs’ also supplied articles for other major newspapers, including Svenska Dagbladet, for which she also wrote as their Rome correspondent from 1908 to 1910, Norrköpings Tidningar, and Stockholms Dagblad, and, even for the short-lived Stockholms-Bladet and the free-minded Afton-Tidningen.

Hilda Sachs was able to use her education, her language skills, and her familiarity with travel in both her professional life and for her work in the women’s movement. An example of this is that she participated in women’s conferences held abroad as both a journalist and an activist for women’s issues. Another example is her early activism as part of the Swedish Federation against the so-called reglementation system in prostitution, which lay the basis for insights which she later relied on as a foreign correspondent in France and Italy. Her comparisons of the conditions of prostitutes in different countries led to the publication of Den svarta domen, 1912. The book had a major impact on public opinion and contributed to the abolishment of the reglementation system in Sweden in 1919.

The central issue of the women’s movement around the turn of the twentieth century was women’s suffrage and electability. In 1902 Hilda Sachs and a small group of women took the initiative to set up Föreningen för kvinnans politiska rösträtt (FKPR, the association for women’s political voting rights) in Stockholm. Hilda Sachs was a member of the board for the association from 1912 until 1921, when FKPR was dissolved as women had gained the right to vote. She then became a member in the working committee for the newly-established Svenska Kvinnors Medborgarförbund (the Swedish civic women’s association), whose goal was to continue the fight for women’s rights even after women’s suffrage had become law.

As a freelancer Hilda Sachs often needed to stretch out her earnings. She was active as a translator and translated around ten books, mainly from French into Swedish. Her language skills also served the women’s movement well. At the 1911 Internationella rösträtts alliance (international suffrage alliance) conference in Stockholm she translated the English feminist Alice Zimmern’s work Women’s suffrage in many lands. The Swedish title of the book is Kvinnornas rösträtt i skilda länder.

Hilda Sachs also wrote literary works. She published the novels Evig sommar, 1900, Märta, 1901, and Den besegrade lyckan, 1907. She discussed the concepts of womanhood and motherhood in her books and although this gave rise to contemporary criticism it was later well-received by gender studies researchers.

In 1918 Hilda Sachs’ last book, Kvinnoporträtt, was released. It contained her much-appreciated article series “Kvinnoporträtt”, which had been published in Afton-Tidningen in the spring of 1916. The book contains about 20 biographies of famous Swedish women who were active in the women’s movement during Hilda Sach’s time. It was described as both an “extremely rich reference work” and as a valuable contribution to feminist literature.

Hilda Sachs was one of the radical feminists of her time who generated a certain amount of criticism. This was even true within the women’s movement as its majority tended towards a more cautious and traditional approach. This is probably partly why she has long been overlooked by history.

Hilda Sachs died in 1935. She is buried at the Norra cemetery in Solna. 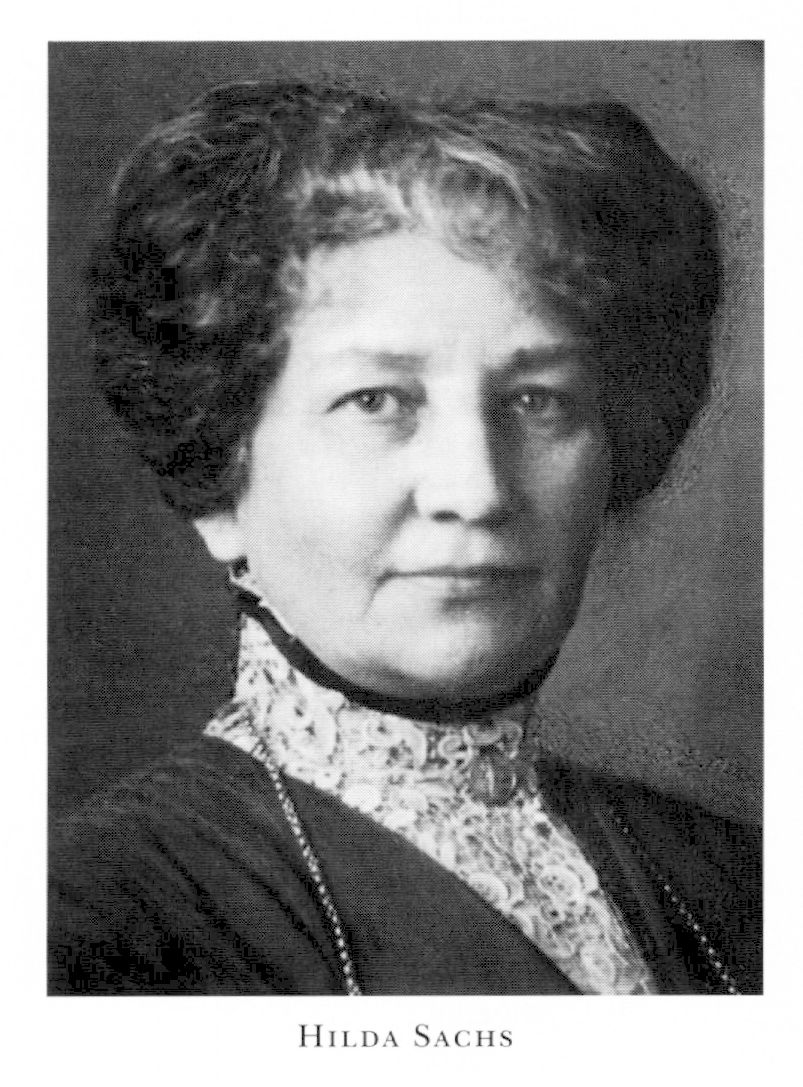