Hildegard Björck was the second female student to attend Uppsala university. She was the first woman to be awarded an academic qualification in Sweden, namely a preparatory medical diploma.

Hildegard Björck was born in Bro parish, Värmland in 1847. She was the third of four children born into a well-to-do household. Her father, Carl Björck, was a surveyor. Her mother, Anna Charlotta Roman, died when Hildegard Björck was only four years old. Three years after this event her father remarried. Her stepmother, Sofia Lovisa Hülphers, was the sister of Herman Wilhelm Hülphers, a prominent doctor. He would play a significant role in her life.

During her childhood Hildegard Björck was home-schooled by governesses. Once women gained the right in 1870 to sit their school-leaving exams as private students Hildegard Björck travelled to Stockholm so that she could study the necessary subjects required for becoming a doctor. In January 1873 she enrolled at Uppsala university, an event that was reported in the Swedish press. On 11 March 1873 Dagens Nyheter reported that two women were included amongst the body of students registered for the spring term: Hildegard Björck and Betty Pettersson.

Hildegard Björck based her course choices on her three main personal interests: philosophy, natural sciences, and the ongoing debate regarding legalising prostitution. There were several good reasons for her to choose medicine over philosophy, which she read instead as part of the mandatory requirements for a medical degree. Hildegard Björck was able to connect with influential doctors through her step-uncle Herman Wilhelm Hülphers. The medical path appeared to be entirely accessible to women with regard to academic training, employment, and salary. However, it quickly became apparent that in practise this was not the case. The next generation of women endured a long struggle for equal rights and opportunities.

Hildegard Björck’s studies remained a point of interest to the contemporary press. Upon her completion of the mandatory preparatory medical diploma in May 1874 she became the first ever woman to be awarded an academic qualification in Sweden. In May 1879 she further became the first ever female candidate for a medical degree. She later moved to Lund where, in April 1880, she became the first female student to attend Lund university. Hedda Andersson, who registered at that university in September the same year, was thus the second woman to do so. However, Hildegard Björck was forced to give up her studies just before she intended to sit her exams due to the hearing damage she had developed as a result of an illness she had suffered as an adult. It is probably precisely because she did not sit her exam that Hildegard Björck has long been overlooked within the historiography of female medics. She did, nevertheless, work as a medical student and as a doctor’s assistant until 1892 or 1893, and thereafter as a nurse.

Hildegard Björck has in part become known to later generations through the entries in Ellen Fries’s diary and her letters. The written descriptions probably reveal more about the writer than her subject, although she did interestingly note the rumours which circulated about Hildegard Björck. Ellen Fries was quite disquieted by her and she spent three university terms avoiding her. This was a lengthy period of time within academic circles where the few existing female students were subject to a lot of attention. Ellen Fries finally visited Hildegard Björck in 1878, accompanied by her friend Hedvig Bergius. Fries’ account of her reactions to the meeting provides an impression of the expectations imposed on Hildegard Björck and how she was perceived within the masculine academic environment of Uppsala: namely as fanatically opposed to prostitution and solely seeking to become a doctor in order to campaign against prostitution. Hildegard Björck gave shocking descriptions of the anatomy rooms and how male students behaved during her meeting with Ellen Fries, leading Fries and Hedvig Bergius to decide not to see Hildegard Björck again before their exams for the sake of their own studies and for their own peace of mind. Later on the prostitution debate and the campaign against the regularisation of prostitution would come to involve several female medical students and doctors, but this was probably unrelated to any direct influence from Hildegard Björck. Karolina Widerström began her studies just as Hildegard Björck was in her last term at Uppsala, and despite her later engagement in the prostitution debate there was no particular contact between the two women.

Hildegard Björck was forced into early retirement from her work at the hospital because she was almost deaf. She left Uppsala to go to Copenhagen and then to Lund. Her network in Copenhagen comprised doctors, relatives, and friends. Through her maternal uncle she probably also had medical contacts in Lund. She was given accommodation at Professor Naumann’s home there. Carl Fredrik Naumann belonged to the same generation of doctors as Hildegard Björck’s uncle, Herman Wilhelm Hülphers, and he came to serve as a vital ally to her. She alternately interned with and assisted both of these doctors, in Stockholm and Lund respectively. Carl Fredrik Naumann was said to have appreciated her surgical skills.

Whilst Hildegard Björck was active in Copenhagen she furthered her knowledge of ear-, nose-, and throat diseases. At some point during this time Julie Ewerlöf, a Swedish diplomat’s daughter, came to see her about some trouble with her ears. Their friendship deepened and developed into a personal relationship. In 1904 they moved to Lausanne, Switzerland where they lived out the rest of Hildegard Björck’s life as a couple.

Hildegard Björck died in Lausanne in 1920. She was buried in 1928 in the family grave belonging to her brother Rudolf Leonard Björck. It lies in The Woodland Cemetery in Stockholm. Her name does not, however, appear on the tombstone. 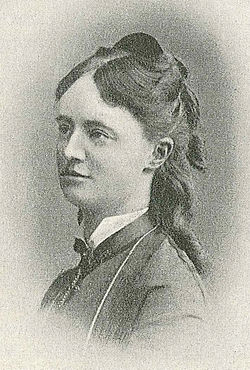