Hilma Borelius’ family had a long background of academics and priests. Her paternal grandfather, Johan Borelius, was a philosopher at Uppsala who gave up his academic career to move to Skinnskatteberg with his wife Catharina Ulrica in order to become a vicar and a rural dean. Her grandparents’ home was an intellectual one and Hilma Borelius’ warm descriptions of her paternal grandmother portray a highly intellectual and religious woman. Hilma Borelius’ father, Johan Jacob Borelius, was born in Skinnskatteberg in 1823. He later became a controversial philosopher in the Hegelian tradition. In 1866 he was appointed professor of theoretical philosophy at Lund University and settled in Lund together with his wife.

Hilma Borelius was an intellectual woman. Her home was full of books and her mother Hedvig, whom she lived with until her death, also took great interest in literature. Her mother was well-read, spoke English, and would help her husband with translations. During her later years she would tell Hilma Borelius that she had once dreamt of becoming a teacher or an author.

Hilma Borelius and her brother Johan, who was two years her junior, grew up on Biskopsgatan near what is known as “Trekanten” in Lund. When Hilma Borelius was twelve she began attending Lund girls’ school and subsequently received private tutoring, presumably at home. In May 1891 she gained her school-leaving certificate at the cathedral school as a private student, obtaining very good marks.

Hilma Borelius enrolled at Lund University in the autumn of 1891 and became a part of the Kalmar student body, of which her father was the honorary chairman. Her father taught her in her first course, which was a preparatory course in psychology. Initially Hilma Borelius was the sole female student but she was later joined by some female students in the following courses: aesthetics and literary and art history, Romance languages, and history. Four years later, in 1895, she gained her Bachelor’s degree, gaining 11 points across five subjects, including theoretical and practical philosophy. She read three points worth of courses with Henrik Schück, then professor in aesthetics and literary and art history. She felt right at home in the lecture hall, but in her 1921 article “Kvinnligt studentlif i Lund” she described her terrifying visits to the university library. Being a woman at university meant that you were an outsider. There were no female teachers and very few female students. In order to find friends Hilma Borelius joined the Uppsala female students’ association, established in 1892. Lydia Wahlström was its chair. Hilma Borelius was invited to the jubilee to mark the Reformation in 1893. She and Lydia Wahlström, who were second cousins, became lifelong friends. Hilma Borelius tried to establish a similar student association in Lund and in November 1900 she set up Lunds Kvinnliga Studentförening (Lund female students’ association). Hilma Borelius was its first chair. Initially there were only 24 members who would gather to hear talks, sometimes by Hilma Borelius herself on Nikolaus Lenau, or by Amalia von Helvig, Charlotte Perkins Gilman, Fredrika Bremer, August Blanche, Rosa Mayreder, or Victoria Benedictsson. Several of these talks were later published in the Fredrika Bremer Association journal Dagny, which from 1914 onwards became Hertha.

Hilma Borelius was active in two spheres. The Lund women’s suffrage association was established at a meeting in 1903, and she became its chair until 1908. She was a keen supporter of women’s suffrage. Another example of her efforts to create public groups was her attempt to establish a bible group for female students in 1897 but there was not enough interest for this to succeed. Lund Christian student association was set up in 1903 and Hilma Borelius was the sole female student who sat on the board.

After gaining her Bachelor’s degree in 1895 Hilma Borelius was undecided about her future. She undertook international travel to Paris with her mother and then, on her return, continued studying French at university, whilst also auditing Schück’s literary history course. During the spring of 1898 she was a substitute teacher in French and Swedish for a good friend at Mariestad advanced school for girls and then did a probationary year in Stockholm. She continued studying at Lund University until 1901, reading French, Romance languages and aesthetics and literary and art history, now taught by professor Ewert Wrangel. Wrangel, who pursued the subject from an aesthetic and psychological dimension, encouraged Hilma Borelius to deepen her knowledge. She subsequently published her lecture on Gessner’s influence on Swedish literature in the journal Samlaren in 1901. This was her first proper academic publication. In 1902 she gained her licentiate in aesthetics and literary and art history by writing a thesis entitled “En studie i svensk 1600-tals dramatic”, for which she received top marks.

Hilma Borelius was unsure about carrying on at the university, which Wrangel continued to encourage her to do. She could not find any thesis work that absorbed her and did not want to accept the professor’s suggestion that she study Schiller’s influence on Swedish literature. After discussing the matter with Lydia Wahlström, however, she changed her mind, and chose to focus on Erik Gustaf Geijer åren före ”affallet”. The day she gained her doctorate was a joyful day as she was given top marks. Several people asked her whether she intended to apply to become a docent. She wrote a letter to Lydia Wahlström a couple of days later stating: “For the sake of the women’s movement – and also for my own sake – I would very much like to become a docent, but just not now”. The following year, in 1910, she became a docent in recent literary history and was the first woman at Lund University to do so, as well as the first female academic in that field throughout Scandinavia.

Becoming appointed docent was a major academic recognition but not a job. Hilma Borelius thus continued with her research at home. She wrote articles including “Ling och asarne”, 1913, two biographies of Carl Gustaf von Brinkman published by Albert Bonnier publishers in 1916 and 1918, as well as a series of articles on female writers in journals such as Dagny and Hertha.

After 1922 a new development occurred within the sphere of the university world and Hilma Borelius was invited to step in as a substitute professor of literary history at Lund University. She was delighted and told her friend Anna Danell in a letter that: “It is fun to ‘play the professor’ and extremely welcome to have a salaried job”. Following this experience she applied for the faculty docent stipend and eventually received it. Professor Böök lead the standard case against her being awarded it whilst Professor Wrangel pointed out that Hilma Borelius was a highly active researcher. When, in 1925, she sought an extension after three years, Albert Nilsson – who had replaced Böök as professor as the latter had left academia for a job in journalism – maintained the case against awarding it to her. Hilma Borelius was once again supported by others within the faculty and she received a three-year extension. In addition to improving her financial situation the docent stipend also kept Hilma Borelius connected to the university. She was given teaching and during this period was the sole female teacher among 70 docents and professors at the university. She gave up her role as chair of the local section of the Fredrika Bremer Association but remained a member of the association board from 1921 to 1926.

Hilma Borelius’s academic research concerned established male authors and what is remarkable in the texts is the aesthetic and psychological focus which dominated at the institution. For example, her work dealt with understanding Geijer’s inner development which gave rise to his apostasy, or a cultural celebrity such as Brinkman. In 1925 Hilma Borelius was tasked by Oscar Walzel, professor of literature in Bonn, with writing a literary history in German. Die Nordischen Literaturen. Handbuch der Literaturwissenschaft was published in 1931. During the 1920s Hilma Borelius was also tasked with starting the publication of Hedvig Charlotta Nordenflycht. Samlade skrifter on behalf of the Svenska Vitterhetssamfundet. She produced two volumes, which were released over the course of 1925-1927.

During these years Hilma Borelius was active within the suffrage movement and in the Fredrika Bremer Association. She regularly contributed to the association journals Dagny and Hertha, writing about female authors such as Selma Lagerlöf, Madame de Staël, Anna Maria Lenngren, Bridget of Sweden, Sophia Elisabeth Brenner and Victoria Benedictsson. She wrote essays about Fredrika Bremer which were published in Ord & Bild in 1913 and in Fredrika Bremers bild: kalender, published by Sigrid Leijonhufvud and Ellen Kleman. Hilma Borelius was approached by J A Lindblad Bokförlag to write a popular-science book on Hedvig Charlotta Nordenflycht as part of the Svenska Kvinnor series. In the book, published in 1921, she presents a thorough psychological perspective, which treats the poems as psychological documents. She also notes connecting links to other poets. Hilma Borelius portrays Nordenflycht as an intellectual woman of her time and bravely contradicts previous research – apart from Atterbom – which is severely condemned as “abusive”.

Hilma Borelius spent all of her life working to strengthen women’s positions at university. She became the first chair of Lund female students’ association and when the board of Akademiskt bildade kvinnors förening (“academically qualified women’s association”) was established in Stockholm in 1904 she was a supplementary member. She was a member of Vetenskapssocieten (Royal Society of Sciences) in Lund and an honorary member of Kalmar student body at the university. She bequeathed 50,000 kroner to the university. A stipend fund was established for talented female students in the humanities at Lund University. It was only 50 years after Hilma Borelius’ death that men were allowed to apply for that stipend so long as female students had by that time become “equally eligible for stipends as male students”. The Hilma Borelius stipend is still available today and since 1982 it has been accessible to all students.

Hilma Borelius died in Lund in 1932. She is buried at Östra cemetery in Lund. 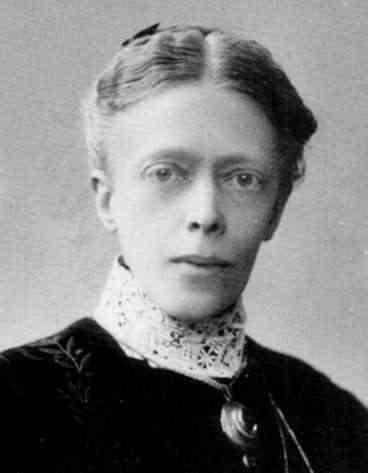