Hilma Hofstedt was a unionist agitator and one of the first women politicians in Halmstad. She held many lectures on birth control and contraceptives during the 1910s, which carried a prison sentence, since such information was forbidden.

Hilma Maria Hofstedt was born in 1882 in Arvika, the daughter of Cajsa Andreasdotter, a maidservant, and the farm labourer Axel Wilhelm Hoffstedt. They were then 23 and 19 years old respectively and not married. Two years earlier, both parents were living at the farm of the tenant farmer, Martin Naucler in Gata in the district of Jösse. At the census in 1890, neither her parents nor Hilma Hofstedt were still living at the farm.

In 1896, Hilma Hofstedt emigrated to Norway, where she worked in a textile factory. According to a police hearing that has been preserved, she was sent back to Sweden in 1901. In the hearing, it was noted that she had given birth to her son Ervin William on 19 March 1901, and left the childbirth institution in Kristiania (nowadays Oslo) on 3 April.

In 1904, the young socialist Haga club was founded in Gothenburg. One of the members, John Andersson, has described when Hilma Hofstedt one evening in about 1905–1906 walked into the meeting at the Verdandi café: ”Judging from her clothes and appearance, she was poor and [...] unsure in front of these new comrades […] She had arrived from Norway a few days earlier, where she had been working for some time and also belonged to a Norwegian socialist young people’s association. She had no fixed address and a small child to provide for and take care of. She had practically no economic means. The women members quickly made the decision to help her with lodgings”. She got herself a job in a low-paid travel goods factory. According to John Andersson, she soon became ”a brilliant speaker” and in the 1910s she was the best of the syndicalist women speakers. She spoke stirringly from her own experiences of poverty, and often travelled on lecture tours, with among others Laura Andersson, the initiative-taker to the syndicalist women’s association and its first chairwoman. Laura Andersson and Hilma Hofstedt were very good friends as well as political comrades.

In November 1907, Hilma Hofstedt drew a full house in Småland and started several women’s clubs. In February 1908, the tour covered Gothenburg, Västmanland and Dalarna. She agitated in Ådalen and Norrbotten for railway navvies and at power station construction sites. She wrote articles in the young socialists’ magazine Brand that were highly praised and was also active in the women’s union Kvinnornas fackförbund, founded in 1902 to collect together women workers who were not admitted to the men’s unions. In 1907, Hilma Hofstedt participated as the representative for her union at a women’s conference organised by the Kvinnornas fackförbund and the Allmänna Kvinnoklubben, and there she contested in an interjection the opinion that industrial work would be morally dangerous for women. The union was active until 1908. Then, as from 1909, seamstresses were admitted to the Swedish tailors’ union.

On 27 February 1905, Hilma Hofstedt gave birth to her second son Ejnar Konrad William in Gothenburg, of unknown father. At the end of 1910, she gave birth to a third son, Alfons Birger, also of unknown father. The three of them were lodgers in the home of Oskar Vilhelm Andreasson, a stonemason, and his family in Tanum. Around 1910, Hilma Hofstedt formed a family with John Karlsson from Bohuslän, also a stonemason. On 14 January 1915, their daughter Gudrun Isabel was born in the parish of Kungshamn.

In 1914, Hilma Hofstedt wrote a critical article about the incitements to go to war in the once-off magazine Det stora blodbadet. There she also described her own situation: ”[I] see my children who have no shoes or warm winter clothes, see my empty firewood cellar, my empty potato bin and turn these poor coins over and over in my hand, that the wealthy company has the unfathomable grace to permit the stonemasons work for [...]”. In 1915, the family moved from Bohuslän to Gothenburg, since John Karlsson was having difficulty in finding work. In April 1916 they moved to Halmstad. When the situation did not improve, John Karlsson emigrated to the USA. To start with, he sent money home to his family, but the contact soon ceased and Hilma Hofstedt was left to support the three children alone.

In December 1915, Hilma Hofstedt held a lecture in Halmstad under the title: ”Poverty–Procreation–Maternity Insurance”. She argued for the right to birth control and sex education and spoke about the suffering that large numbers of children and perpetual pregnancies meant for poor women labourers and their families. Her source of inspiration was Dr Alma Sundquist, who Hilma Hofstedt had heard speak at the first social democratic women’s congress in 1908. According to the so-called contraceptives legislation, that forbade all information about contraceptives up until 1937, Hilma Hofstedt was sentenced to a fine for the lecture. Her wages as a laundrywoman were insufficient to pay the fine. Letters of demand continued to come while she travelled on new tours to meetings and wrote about them in Brand.

Towards the end of 1916, when Hilma Hofstedt returned from a tour covering Småland, Borås and Fritsla, she was arrested by the police and put in prison. She wrote ironically about her time in prison in Brand, in which she called prison ”the State’s Boarding-house” and expressed her solidarity with those imprisoned for the Amalthea bomb in 1908. The year after, she published her lecture at her own cost.

In Halmstad a meeting was organised on 22 April 1917 by the temperance movement in which Hilma Hofstedt was a participant. Other organisers were the young socialists and the social democratic youth club. The subject was ”women’s demands in times of need”. Attendance was great and people gathered in the streets outside. At the meeting, Hilma Hofstedt spoke about the women in the French revolution who marched for bread, and challenged the people of Halmstad to direct action. She criticised the country’s food politics and demanded an eight-hour working day. On 23 April, a third of the population of Halmstad participated in a demonstration that first approached the city hall, where the mayor was waiting. Hilma Hofstedt made a speech and read out a resolution containing twelve demands, among others the demands for just distribution of foodstuffs, a municipal central kitchen, organisation of the housing situation and an eight-hour working day. The mayor testified that the suggestions put forward would be tested. The demonstration continued on to the courtyard of the castle and the county governor, where it received an equally good response. Even though the demonstration was peaceful, it was monitored with aimed machine guns. All round the country, including Halmstad, workers’ councils were started.

The following year, Hilma Hofstedt was invited by the 6 May committee to hold meetings in Gothenburg. On 20 March she spoke on the theme ”Hunger solidarity and workers’ morale” in Färjenäs. The issue was speculation with foodstuffs, when food was kept back only to be sold later on at a higher price. Hilma Hofstedt considered that the municipal foodstuffs committees needed to be pushed. She is said to have declared that the workers ought to ”gather together and demand control over foodstuffs” and that if it was possible to demand hunger solidarity of the workers, the stores of foodstuffs should also be ”generally and justly distributed and ransoned”.

In 1922, Hilma Hofstedt was elected to the city council in Halmstad, as the first name on the ballot papers for Sweden’s communist party (SKP). She was also a member of the church council and the temperance committee, and put forward issues concerning the redistribution of church land to poor agricultural labourers, women’s rights, a municipal childbirth institute and increased contributions to the Föreningen Mjölkdroppen, an association for providing free milk for children. She undertook her last lecture tour for the Syndikalists in 1925.

In 1928, Hilma Hofstedt travelled with a delegation of 300 persons to the Soviet Union. The same year, she held a First-of-May speech in Stockholm for an audience of 4,000 people, and was a candidate for parliament as the first name on the ballot paper for Halland’s communists. However she did not get elected. She worked at the same time as a laundress and took in extra work sewing at home. When she was on tour, the children often had to manage on their own. During a journey to the Soviet Union in 1934, Hilma Hofstedt suffered a stroke. Her health deteriorated further after her return home. In 1935, she was compelled to leave her municipal assignments and was unable to be a parliamentary candidate, as she had planned. She is said to have lived her final years in ”atrocious poverty” and many times not to have had food for herself or her children.

Hilma Hofstedt died in 1937 of another stroke. She was accompanied to her grave in the Western Cemetery in Gothenburg by a great demonstration march with unions and left-wing political organisations. 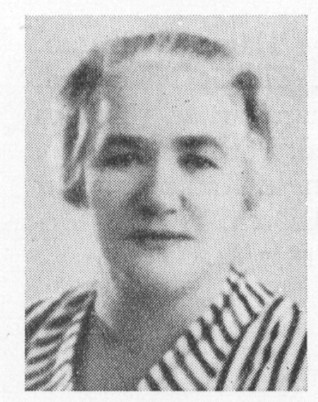