Hilma af Klint was one of the first women to train at Konstakademin (the academy of art) in Stockholm. She was a pioneer of abstract art.

Hilma af Klint was born at Karlberg castle in 1862 into a naval family. She was the niece of naval officer and cartographer Gustaf af Klint, whilst her father was a commodore. Hilma af Klint displayed a talent for drawing in her youth and was the first woman in her family to continue her education beyond high school. Although five children were born to her parents, only Hilma af Klint, her elder brother Gustaf, and her younger sister Ida survived into adulthood.

After training at Tekniska skolan (later Konstfack, or school of art, crafts, and design) Hilma af Klint continued onto Konstakademin. At the same time she also studied portrait painting with Kerstin Cardon in Stockholm. She completed her training in 1887 and then proceeded to earn her living by producing realistic landscape paintings as well as portraits. She was also given a stipend in recognition of her success as a student and was given access to her own studio at Kungsträdgården.

Spiritual matters were a permanent feature of Hilma af Klint’s life. Throughout the years she and her female friends had held spiritualistic meetings. In 1889 she joined Teosofiska Samfundet (the Theosophical society) which had been set up in Viktor Rydberg’s Stockholm apartment that same year. She was still a member of the society when, in 1896, she set up a group called De fem (the five), which was also known as Fredagsgruppen (the Friday group). This group comprised four women and herself, including her close friend Anna Cassel whom she’d met at Konstakademin. De fem would get together to hold spiritualist meetings and have spiritualist conversations. Through their séances they made contact with beings they called “De höga” (the elevated ones) and Hilma af Klint consistently kept meticulous notes of all the signals she claimed to receive. Over the course of time her fellow group members became increasingly important to Hilma af Klint and her artistic development.

Hilma af Klint’s interest in spiritual matters had already emerged when she lost her youngest sister Hermina in 1880. This interest also became the basis of her journey into symbolism and the form of expression which she came to use. She eventually developed a style which predated, by many years, those artists who have become synonymous with abstract art. Hilma af Klint predated the likes of Piet Mondrian and Wassily Kandinsky, as well as Kazimir Malevitj, all of whom were active from the 1910s onwards. Hilma af Klint’s form of artistic expression was based on the inspiration and messages which she claimed to receive from the spiritual dimension. She used automatic writing, in which hand movements were guided by the subconscious. She even drew automatically, before the surrealist masters used the same technique themselves.

When Hilma af Klint’s father died in 1898 she moved back home in order to look after her mother. Part of Hilma af Klint’s income came from working as an artist for Veterinärinstitutet (the veterinary institute). During the early 1900s she developed an artistic interest in the astral plane and she would paint and note the messages and tasks she was given during séances. Initially she received 26 astral images from “De höga”. These later became the collection known as Målningar till Templet. During the ensuing years she studied philosophy and met Rudolf Steiner, the founder of anthroposophy, when he was in Stockholm in 1908. With him she discussed the assignment which she claimed to have been given by the spirits, and she showed him some of her work. He advised her not to show her astral paintings to anyone, at least not within the coming 50 years. Rudolf Steiner did not believe anyone could understand her creations. Hilma af Klint ceased painting for a whole year following her meeting with Rudolf Steiner. It was not until 1915 that she completed all 193 paintings which form the series called Målningar till Templet. After this Hilma af Klint spent some time developing her metaphysical paintings. This resulted in several series based on her studies of religion, botany, animals, and minerals.

After the death of her mother Hilma af Klint moved to Helsingborg along with her mother’s former nurse, Thomasine Andersson. In Helsingborg she joined Antroposofiska Sällskapet (the anthroposophical society). She travelled to Switzerland where she spent a few years in Dornach and where, amongst other things, she studied Goethe’s chromatics, as Ellen Key had done before her. Once she had completed these studies she began to use watercolours, but then took a five-year hiatus from painting. By 1927 she had completed her next collection which was an esoteric systematic ordering of nature. When it was finished she handed over her entire collection of plants, lichens and other items to the natural sciences library in Dornach. Unfortunately the collection no longer exists.

When she returned to Sweden in 1932 she painted two paintings which were premonitions of events that happened barely 10 years later. These were Blitzen över London and Sjöslagen i Medelhavet. Hilma af Klint moved to Lund during the 1930s, and in 1940 she returned to the Stockholm area and settled in Ösby in Djursholm where she lived with her cousin Hedvig af Klint.

Hilma af Klint was involved in a traffic accident in 1944 and died as a result of it. She is buried at the Galärvarv cemetery in Stockholm.

Hilma af Klint left clear instructions about her paintings, notes, and sketchbooks in her will. The 1300 works and the more than 25,000 pages of notes were not to be accessed until 20 years after her death. She also wanted the 1300 abstract works to be kept together. These works formed her debut exhibition in Los Angeles in 1986 at an exhibition called The Spiritual in Art – Abstract Paintings 1890–1985, long after her death. Hilma af Klint’s work generated a significant response from the public and turned the art historians’ received views on abstract art upside down. Her abstract artwork has been displayed at galleries across the world. Even today her form of artistic expression as well as the investigations that she based her work upon continue to generate further interest and queries. Her paintings have even been used by the world of fashion as prints for clothing. Today (2017) Hilma af Klint’s work and collections are intact and are managed by Stiftelsen Hilma af Klints Verk (the foundation for Hilma af Klint’s works). 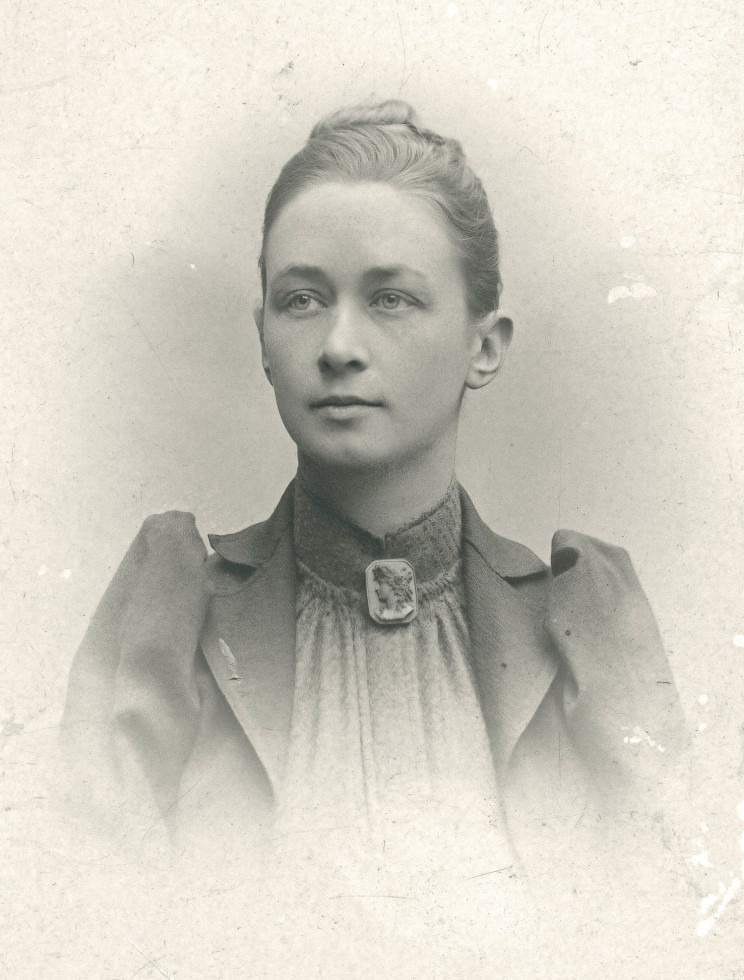