Hjördis Petterson was an actor who was one of the most prolific actors within Swedish cinema during the 1900s.

Hjördis Petterson was born in Visby in 1908. Following a period of training at the Dramaten elevskola (royal theatre school) from 1927–1930, she worked throughout Sweden within a variety of different genres. She frequently returned to perform at the Dramaten theatre but did not limit herself to playing serious roles and also performed in revue shows and farces. Once she had left the Dramaten elevskola she worked at Folkteatern in Gothenburg. That theatre’s artistic director, Torsten Hammarén, became an important teacher to her and Hjördis Petterson has herself described him as the person from whom she learnt the most. Following her time with Torsten Hammarén Hjördis Petterson then worked at Konserthusteatern and Vasateatern, under the leadership of Gösta Ekman, and Hjördis Petterson has described this period as a second school of acting. It was also during this period that she first performed a major comedic role. Hjördis Petterson performed on a variety of different stages during the 1940s and 1950s, including the Dramaten and Göteborgs stadsteater, as well as a number of private theatres. From 1968–1974 her ‘home’ stage was at the Dramaten theatre. When she performed her final stage role in 1985, in István Örkeny’s Kattlek, it was at Dramaten.

Hjördis Petterson performed nearly 200 different roles throughout her career, across a range of genres. She performed major dramatic roles in works by Strindberg, Lagerkvist, Molière, and Lorca. In addition to this she was a frequently appearing primadonna of revue shows mainly at Folkan, in Kar de Mumma productions, but also working with Karl Gerhard. Her strong singing voice and good diction made her a stand-out singer of couplets. She was known for her snappy and spot-on replies, a talent that she had largely refined by working in many revue shows. Hjördis Petterson also played Mrs Peachum in Brecht’s Tolvskillingsoperan, directed by both Ingmar Bergman and Alf Sjöberg. Her comic roles were mainly performed within the context of working at private theatres, such as Lorensbergteatern, Intima teatern, Vasateatern and Oscarsteatern where farces by Kesselring, Coward, and Shaw dominated.

Further to her stage career Hjördis Petterson was often seen on the silver screen. She appeared in nearly 140 different films. Her own favourite film role was Madam Flod in Arne Mattsson’s film adaptation of Hemsöborna from 1955. She appeared in several of Ingmar Bergman’s films and her final screen role was Olga in Kay Pollak’s Barnens ö in 1980.

One of Hjördis Petterson’s special talents was her ability to portray characters of any age. She already played the part of Julia Hyltenius, a widowed dean’s wife, in Hjalmar Bergmans Hans nåds testamente at the young age of 23. Further to her work on the stage and screen Hjördis Petterson also made several TV- and radio-appearances. She is probably best known for her role as the gruff housewife Selma Olsson in Rune Moberg’s radio seres Lille Fridolf och jag. The series aired on the radio from 1955–1958 and, towards the late 1950s, four films were made based on the popular radio characters played by Hjördis Petterson and Douglas Håge. This gruff and domineering female character quickly became a trademark role which she went on to play and be typecast as for the rest of her life.

Hjördis Petterson married twice. Her daughter Annika was born during her second marriage, and she too went on to become an actor.

Hjördis Petterson died in Stockholm in 1988. She is buried at the Tofta cemetery on Gotland. 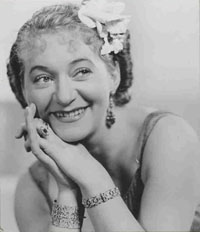