Ida Matton was an artist, primarily a sculptor, who was active in Paris for most of her adult life. She was the only female sculptor to be awarded a medal for sculpture in the Swedish pavilion at the World Fair held in Chicago in 1893. She was also the first foreign sculptor to become a member of the board of l’Union des Femmes Peintres et Sculpteurs. Further, she was the sole female artist within the Swedish artists’ colony living in Paris to become an Officier d’Académie as well as the first foreign female sculptor to be honoured with a retrospective exhibition at the Grand Palais in 1930.

Ida Elisabeth Matton was born in Gävle in 1863. She was the fourth child in a family of six born to a wealthy tanner and producer of leatherware, Lars Andreas Matton, and his wife Mathilda, née Wallmon. Ida Matton received her basic education at Elsa Borg’s and Karolina Själander’s Högre flickskola (advanced school for girls). Her family was part of the town’s upper middle class. This meant that Ida Matton carried significant cultural and financial capital with her when she, with her parents’ blessing, moved to Stockholm once she had finished her schooling.

Ida Matton had already begun taking lessons in wood-cutting when she was twelve years old and from 1877–1881 she was a pupil at Wallinska skolan in Stockholm, with the intention of training as a handicrafts instructor. She was a skilled drawer and wood-worker and continued her training in sculpting at Tekniska skolan (now Konstfack, college of arts, crafts and design). There she studied wood-cuts, model making and drawing from 1881–1887. She received stipends and diplomas each spring and completed her training with a stipend of 200 kronor. She then spent a semester working as a handicrafts instructor at Wallinska skolan.

Through the benefit of a 500 kronor travel stipend from Kommerskollegium (board of trade) and a loan of 10,000 kronor from her parents Ida Matton headed off to Paris in October 1887 to continue her sculpture studies. In Paris she attended Académie Colarossi along with many other Scandinavian artists. During the late autumn that same year she wrote to her younger brother, Emil: “You wouldn’t believe how hard we work and I am loving it. If you only knew how much I have already learned. Every time I think about old Tekniska it makes me wail at how slowly one improved there”.

Already by the following year, 1888, Ida Matton made her debut at the Paris Salon, displaying her plaster bust of a child, entitled Antoine, and the next year she showed another two of her pieces, Écoutez and Reveuse. Ida Matton remained at Académie Colarossi until 1889. In the summer of that year she and her friend, the physiotherapist Anna Rudbeck , travelled to Brittany for the first time, a place she would return to during many summers in the years to come. There she produced, amongst other things, a relief entitled Bretagnska in 1896, for which she received honourable mention at the World Fair in Paris in 1900.

For a few years Ida Matton shared a studio with some student friends before she obtained her own studio at 50 Avenue d’Iéna, just as she began to attend Académie Julian in 1889. Her tutors would come to her studio to advise and instruct her, including Jean Antoine Injalbert, Antonin Mercié, Henri Chapu, and Denys Puech, all of whom were prominent sculptors trained in the classical school of sculpting and friends of the French salon. Taking their influence from Jean-Baptiste Carpeaux they represented classical sculpture and its motifs derived from Ancient Greece, Roman mythology, and from the work of Michelangelo. All these elements formed major influences in Ida Matton’s art and served as her role models throughout her artistic life. At an early stage in her life she distanced herself from the emerging artistic trends. For example, following a visit to the independent salon in 1896 she wrote that “one almost feels unwell upon seeing the new sculptures. Thank goodness I am familiar with the old Salon where the old masters exhibit”. In contrast to many of the Nordic artists in Paris she was not an admirer of Auguste Rodin’s sculptures.

Shortly after her arrival in Paris Ida Matton quickly gained access to the Louvre in order to study and copy works held within that collection. Making copies of classical pieces was a normal part of the artistic training undertaken by female artists. During 1904 she also spent a couple of months in Italy in the company of her friend, the Australian singer Elyda Russell, and in Italy she visited the major collections of classical sculptures at the Uffizi, Capitoline, and Vatican museums. One of the lasting impressions she had was of working with marble. In the summer of 1922 she returned to Italy and studied classical art and in February and March of 1934 she again revisited Rome and the Capitoline museums.

Ida Matton’s actual public breakthrough occurred at the World Fair held in Chicago in 1893 when she, as the only female sculptor in the Swedish pavilion, was awarded a medal for her work entitled Bébé/Maman. Three years later she was given honourable mention for the same piece by the Women’s Salon, organised by l’Union des Femmes Peintres et Sculpteurs in Paris. She was an active member of this organisation, both as a member of the jury which selected sculptures for the organisation’s annual exhibitions and as the first foreign member of the organisation’s board.

In 1895 Ida Matton set up her studio at 233 rue Faubourg St Honoré, which became her permanent site until 1937 when she finally returned to Gävle for good. A large community of artists had settled in studios in the surrounding area, including her teacher Puech and the Finnish sculptor Ville Vallgren and his wife, Antoinette Råström Vallgren. Ida Matton herself never married and never set up a home in Paris even though her family suggested that she could share a home with her sisters Anna and Malla Rudbeck. Ida Matton opted instead to move between various ‘pensions’ in the vicinity of her studio. In 1925 she purchased both her own studio and the neighbouring one, where she installed water, sewage and electricity supplies. She received her friends at the studio as well as artistic colleagues such as Christian Eriksson and Anders Zorn, and members of the Swedish community such as Nathan Söderblom, the Swedish pastor, and his wife Anna Söderblom, and prospective clients.

Given that female sculptors tended largely to be marginalised and rarely gained public commissions they primarily dealt with private commissions. Throughout her career Ida Matton produced portrait busts of professional men from within her own social circle, as well as of family members and of female friends and children. For example, she produced a bust of Nathan Söderblom in 1896 and one of the president of the Swedish Club in Paris, Edward Björkman, in 1922.

Ida Matton also created sculptures which represented feelings and environments, such as I vågor, in 1894, for which she won honourable mention at the World Fair in Paris in 1900; mythological and allegorical sculptures such as Lokes straff in 1905 and Förtoendet in 1902, the latter of which gained her the prize for sculpture at the Women’s Salon in Paris in 1903. She did produce a few public sculptures: a bronze bust of Karolina Själander, unveiled in 1942 after Ida Matton’s death; a marble bust of Molière for the new Kungliga Dramatiska teatern (royal dramatic theatre) in 1905; Lokes straff which was exhibited in plaster at the 1897 Salon and in marble in 1909 and then created in bronze and donated to what became Länsmuseet (regional museum) in Gävle in 1938; and a bronze sculpture of King Gustav Vasa produced for Gävle town and unveiled in 1924.

An important element of Ida Matton’s output was the funerary monuments which she produced for the Matton family in 1900 and for some of her friends: the teacher Karolina Själander’s parents in 1903, Captain Elon Lundqvist in 1907, ship-owner O A Brodin in 1922. All of these were placed within Gamla kyrkogården (the old cemetery) in Gävle. She also produced one in 1916 for forester Karl Hanström at Norra kyrkogården (the Northern cemetery) in Stockholm and a recumbent relief for director Tord Magnuson in Sandviken in 1931. She also created sporting trophies, plaques, bronze vases, and ceramics and a few table ornaments.

Ida Matton’s primary exhibition sites in Paris were the salons organised by la Société des Artists Français and l’Union des Femmes Peintres et Sculpteurs at the Grand Palais. In order to gain recognition in Sweden she enthusiastically displayed her work at Föreningen svenska konstnärinnor (Swedish female artists’ association) exhibitions in Malmö in 1914, at Liljevalchs in 1911 and 1917, as well as in Philadelphia in 1930. Her works were also displayed at the Royal Academy in London, in Berlin, in Vienna, and in Bremen. The pinnacle of Ida Matton’s output and her artistic efforts was the retrospective exhibition held by l’Union des Femmes Peintres et Sculpteurs at the Grand Palais in Paris in 1930, opened by President Gaston Doumergue. Her 25 sculptures and 13 paintings were given an entire room to themselves which, according to the Paris correspondent for Idun journal, Anna Levertin, was “an honour not previously shown to any other foreign female artist”.

Ida Matton spent many of her summers in the Swedish mountains, mainly in Abisko where she would walk with friends and sometimes, influenced by her friend Helmer Osslund’s colourful paintings, herself paint landscapes. She also produced oil paintings with motifs from Brittany, her hometown of Gävle, and the family farm at Flottskär in Norduppland.

Ida Matton was made Officier d’Académie in 1903 and Officier de l’Instruction Publique in 1912. In 1927 she was awarded the Litteris et Artibus medal in Sweden.

Ida Matton died in Gävle in 1940. She is buried at the family grave in Gamla kyrkogården (the old cemetery) in Gävle. 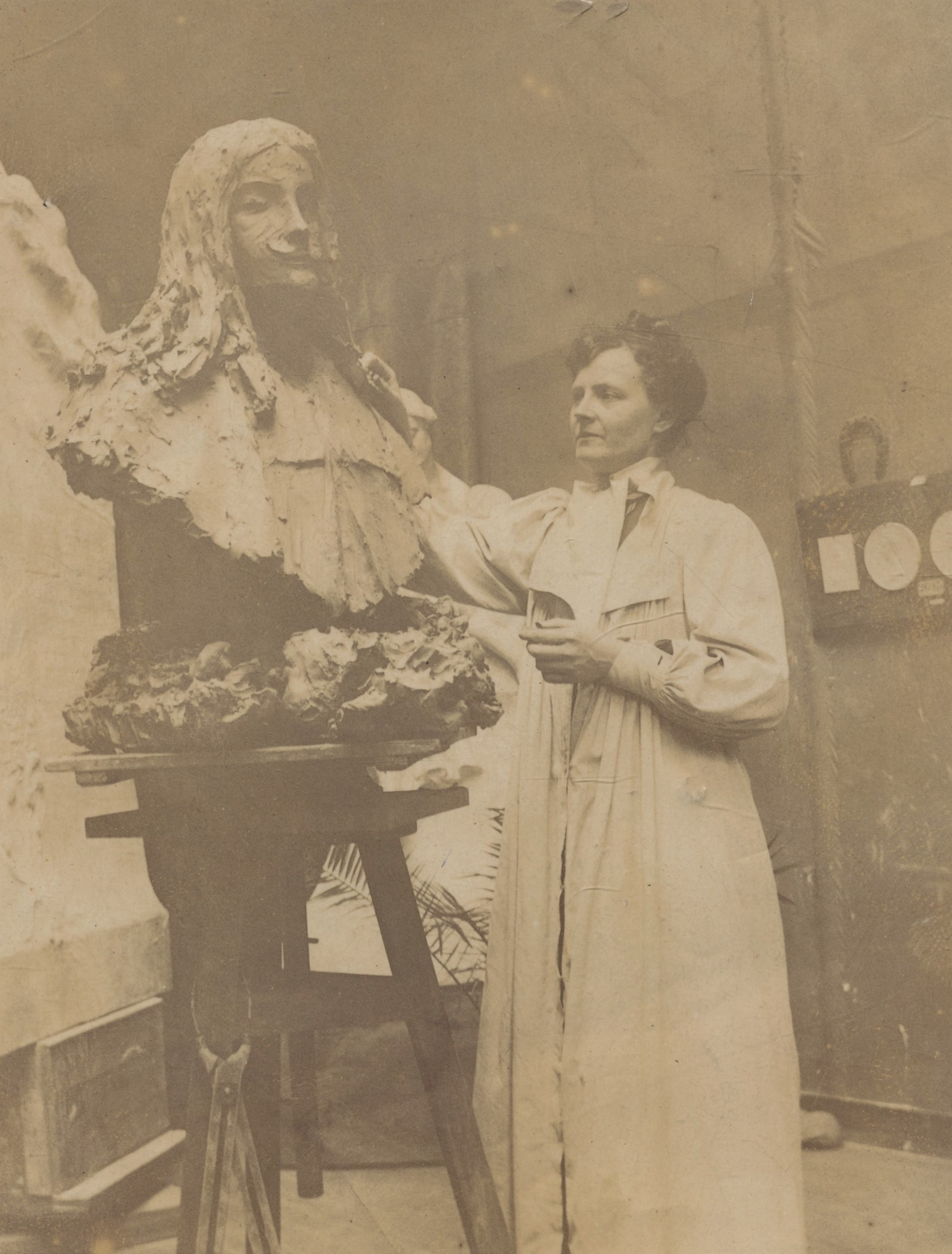 Ida Matton at work on her bust of Molière. Photographer and date unknown. Uppsala University Library (6690)