Ida Trotzig was a Japanologist, an author, a collector, and an artist. She spent 33 years in Japan and through her close collaboration with the likes of the Museum of Ethnography in Stockholm, she played a significant role in disseminating knowledge about and popularising Japanese culture in Sweden.

Ida Trotzig was born in Kalmar on 6 September 1864. Her father was Henrik Magnét, a bank director, and her mother was Bertha Amenoide, née Trotzig. Ida Trotzig’s curiosity about Japan was aroused at an early age through the letters received from a relative, Herman Trotzig, who had settled in Nagasaki in 1859 and then, from 1868 onwards, was the head of Kobe’s police force. Herman Trotzig met Ida Trotzig during a visit to Sweden in 1888 and the two of them developed feelings for each other. It wasn’t long before they married and then, in October that year, Ida Trotzig moved to Japan with her new husband.

Herman Trotzig’s fluency in Japanese and his extended network of contacts provided Ida Trotzig with good opportunities to further deepen her fascination with Japan. She learned the language and formed a large circle of friends whilst also learning to paint and studying calligraphy. She spent ten years as the apprentice of a chado master, namely a master of the Japanese tea ceremony. Eventually she herself became appointed a tea master which qualified her to host tea ceremonies. She was probably the first Swedish woman, indeed perhaps the first foreign woman, to be awarded that title.

Ida Trotzig regularly had articles published in Sweden about her experiences in Japan. Her detailed anthropologically informed observations were printed in the daily press and in magazines, covering all sorts of areas from handicrafts and house-construction, religion, festivals and marriages, as well as the everyday lives of women and children, and childbirth. Although these articles were primarily directed at a mature readership she also provided material for children which was published in school magazines.

During her early years in Japan Ida Trotzig had two children. Her daughter Bertha was born on 5 July 1889, and her second daughter Jane was born on Christmas Eve the following year. She tragically lost both of these girls just a little while later as a result of a typhoon in Suma on 19 August 1891. Three years later the Trotzig couple had a third daughter, Inez, who grew up in Japan.

One of Ida Trotzig’s hobbies with her daughter was collecting butterflies during trips into the mountains near Kobe. Rare specimens were donated to the National Museum of Natural History in Stockholm during the 1899 to 1917 period. Several newly discovered species were named after Ida Trotzig and her granddaughter, Gaby Stenberg. Ida Trotzig is thus also referred to as a pioneer amongst Swedish female entomologists.

Between 1909 and 1912 Ida Trotzig made a temporary visit to Sweden which marked the beginning of her significant collaboration with the Museum of Ethnography in Stockholm. At that time this museum simply formed a department within Naturhistoriska riksmuseet. The latter has, since 1999, been part of Statens museer för världskultur (state museums of world culture). Ida Trotzig undertook a detailed investigation of the museum’s Japanese collections, for which the current head of museum Carl V. Hartman expressed great appreciation. Her connection to the museum led to her taking on a central role in the exhibition on Japan held at the Royal Swedish Academy of Fine Arts in 1911. Indeed she supplied a chapter on Japanese ceramics for the exhibition catalogue. Subsequently the museum published her book, Cha-No-Yu: Japanernas teceremoni, which gave a detailed description of the tea ceremony, from its history to its practical and main aspects. In 1911 Ida Trotzig also organised the preparation of a volume entitled Japanska sagor, to be published through Barnbiblioteket Saga.

Following these contributions Ida Trotzig returned to Japan with a request from the Museum of Ethnography, namely to gather photographs and items to add to their collections. Carl V. Hartman specified her task in a letter dated 1916: she was to supply, to the value of 300 Swedish kronor, large-format photographs suitable for display.

This formed the beginnings of Ida Trotzig’s photographic collection. Following her return to Japan she collected a number of photographs between 1917 and 1918, all of which had been taken by Japanese photographers around the turn of the century. Ulla Wagner has written about this collection in the book Det drömda Japan: Ida Trotzigs fotosamling från Meiji-tidens Japan. One of the things Wagner highlights is that the collectors and donors listed in the Museum of Ethnography’s catalogue at this time predominately comprised men, in turn making Ida Trotzig somewhat of a pioneer. Given that she was a fulltime resident of Japan and through her depth of knowledge of its culture Ida Trotzig was able to create a more thorough collection than many well-known collectors. Although she was no professional ethnographer she had a keen eye for her environment and the nuances of everyday life contained within it.

This collection of photographs depicts traditional Japanese environments, everything from scenes at home and everyday life, to work, religious rites and ceremonies. The collection is striking due to its relatively authentic impression of contemporary Japan. The scenes captured on camera include ordinary people in ordinary contexts and thus stand out as genuine moments reflective of a living culture. Certain series of photographs even took on a pedagogic quality as they portrayed, in sequence, a variety of illustrated activities such as rice cultivation and marriages. It is clear that ethnographic interests formed the motivation for the collection. The images serve as an interesting complement to literature then available on and from the Meiji era.

Nevertheless it must also be pointed out that the collection’s perspective on Japan was intentionally coloured. Many of the photographs were, in fact, staged and were intended for the contemporary tourist market. The view of traditional Japan as portrayed in the photographs was already a fabrication during Ida Trotzig’s time. She lived in a Japan undergoing change, where modernisation, industrialisation, and centralisation were in the process of replacing the old culture and way of life. Leaving this element out of her photographic collection means the images conform to the orientalist view of Japan. Indeed, Ida Trotzig contributed donations to the Museum of Ethnography which enriched its collection. In total she donated over 300 photographs and postcards to the collection in addition to 100 objects.

Following Ida Trotzig’s return to Japan she also began to study ikebana, namely the Japanese art of flower-arranging. She spent four years studying with master Kensaburo Shiotani, eventually mastering this highly-respected tradition. Her surviving papers including material on ikebana and in 1990 it was published in book form as Japansk blomsterkonst, with an introduction written by her grand-daughters.

In 1921 Ida Trotzig returned to Sweden permanently following the death of her husband Herman Trotzig two years earlier. Given her expertise in tea she was invited to represent the James Lundgren & Co tea company during a major touring exhibition. She presented the company’s assorted teas and hosted tea-brewing sessions. The success of this tour generated increased interest in tea amongst schools and associations throughout Sweden and Ida Trotzig became highly sought-after for numerous appearances.

Ida Trotzig’s interest in Japan eventually culminated in what was perhaps her most ambitious project: the construction of a tea house at the Museum of Ethnography. She was responsible for the project concept, which was realised through the financial support of Ginjiro Fujihara, chair of The Japan-Sweden Society in Tokyo, as well as James Lundgren’s then director Douglas Lundgren. The tea house was first built, according to Japanese traditional methods, in Tokyo where it was inaugurated on 20 March 1934 by Prince and Princess Chichibu. It was then dismantled, freighted to Stockholm, and re-erected in the grounds of the Museum of Ethnography. The Swedish inauguration was held on 8 October 1935 by Crown Prince Gustav VI Adolf and Crown Princess Louise Mountbatten. The tea house was named Zui-Ki-Tei, which can be translated as ‘the home of promising light’.

This was the first building of its kind in Europe and inside it Japanese tea ceremonies were regularly held. Many of these were hosted by Ida Trotzig herself and they were decorated with her own ikebana arrangements. This tea house can be considered to be the culmination of Ida Trotzig’s collaboration with the Museum of Ethnography and even of her career as a Japanologist. Sadly the building burnt down in 1969, but on the initiative of two of Ida Trotzig’s grandchildren it was replaced by a new building in 1990.

Ida Trotzig was awarded the gold Vasa medal of the eighth degree by King Gustav V in recognition of her efforts in conjunction with the Museum of Ethnography. She was an influential agent within that museum’s enterprise and a central figure within the sphere of Japanology in Sweden. Her heartfelt interests, extensive knowledge and deep involvement meant that her contributions to the dissemination of Japanese culture in Sweden were substantial. 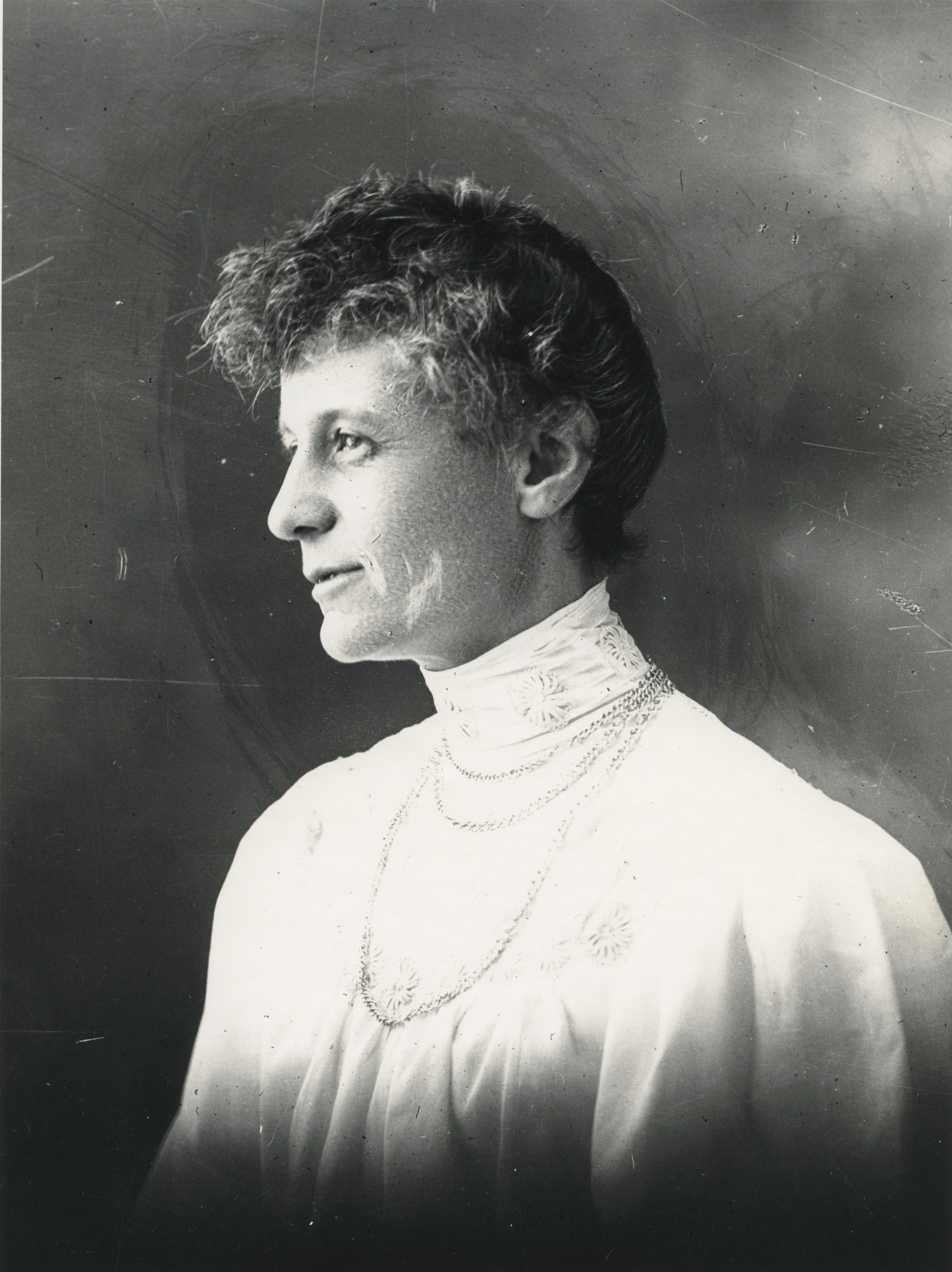