Inga Åberg was a singer and an actor who was active during the late eighteenth and early nineteenth centuries.

Ingeborg Elisabeth Åberg, known as Inga, was born in Stockholm in 1773. Her father, Jonas Åberg, had been a footman at the royal court until he was promoted to treasurer in 1769. That was the year he married Fredrika Maria Svahn and she later gave birth to Inga Åberg.

Inga Åberg’s inherent acting traits led her father to place her, aged only eight, in the drama school run by the French drama teacher Jacques Marie Boutet de Monvel. The newly established drama school had just opened that year in Stora Bollhuset. The fact that it lay directly opposite the Stockholm palace, where Inga Åberg’s father worked, probably also factored into his decision. In 1786 Inga Åberg’s younger brother, Gustaf Fredrik, began attending the same school aged eleven. The school principal, the theatre director Monvel, and his theatre troupe had all been invited to come to Sweden from France by King Gustav III in order to serve as role models and to teach novice actors in Sweden.

Inga Åberg was just fourteen years old when she was given the part of Odin’s son, Yngve – a so-called “breeches role” – in Olof Åhlström’s production of a one-act opera called Frigga, performed at the opera on 31 May 1787. However, the very first time that Inga Åberg actually trod the boards had been a few months earlier, in January. Then she had played the part of a spirit in the Gluck opera called Armide. On 1 April 1788 Inga Åberg formally gained employment as an actress and singer for Kungliga Operan (royal opera).

The next year, in 1789, when she was sixteen, Inga Åberg met Carl Gustaf von Stockenström. He was a twenty-year-old captain in the Bohuslän dragoon regiment. They seemingly never married but two years later Inga Åberg gave birth to a child, Wendla Gustafva. The child’s father died in 1797 as the result of a bullet shot to the hip sustained during an unsuccessful duel.

Inga Åberg, now a permanent employee at Kungliga Operan, performed in two operas by Georg Joseph Vogler. Firstly she played the role of Sigrid in Gustaf Adolf och Ebba Brahe, which premiered in January 1788, and secondly she performed as Carl in Folke Birgerson till Ringstad, which premiered in January 1793. In between those two productions Inga Åberg appeared as Maria Efrosyne in Johan Henrik Kellgren’s heroic play Drottning Christina, premiering in January 1791. Later on she played Carl Sjöcrona in Det farliga förtroendet, an opéra comique by André Grétry performed in November 1794, followed by the part of Gustafva in Nicolas Delayrac’s opera De gamla friarna, in January 1796. She also performed as Almaide in André Grétry’s opera La caravane du Caire.

Following her appearance at the opera in May 1800, as Julie in Olof Åhlström’s The Dentist, Carl Christopher Giörwell the elder wrote that Inga Åberg was “of all the actors the only one of her sex to diligently display her seductive talents and to sing most graciously”. She appeared in 78 performances of the said musical farce which was then followed by six performances of Antonio Sacchini’s opera Oedipe i Athén, in which she sang the part of Eriphile at the opera’s premiere in November 1800.

Kungliga Operan gained a secondary stage in 1793 when Makalös palace, which belonged to the de la Gardie family, was supplied with modern theatrical machinery and a new salon and was renamed Arsenalsteatern. Inga Åberg often performed here, including in Stanislas Champein’s musical comedy Le Nouveau Don Quixote in November 1804. She played the role of Julie twice. She also appeared in Pierre Gaveaux’s opéra comique Monsieur des Chalumeaux in June 1808, playing the part of Mrs de Brillon as well as the part of Lovisa in another musical comedy, Äfventyraren, with music by Joseph Martin Kraus, in September 1808. Inga Åberg also appeared in the role of Lisetta in Ferdinando Paer’s opera Griselda, produced at the opera on 28 February 1810.

The spring of 1810 was Inga Åberg’s final season as a regular employee after which she retired, following a career of over 23 years. On 26 April 1810 she gave her last performance in what was known as a ‘recett’, where the show’s takings went directly to her, for her pension. In this final performance she played both roles – Olympia and Valbina – in Giovanni Paisiello’s opera Marquis Tulipamo. Reviewers denounced the opera as far too burlesque to be performed at the opera. Following her departure Inga Åberg then spent a couple of years living in the countryside with a singer named Howing.

Around 1812, however, Inga Åberg and her daughter, Wendla Gustafva who would soon become a prominent dancer, were both hired by the Johan Anton Lindquist theatre company. During two periods, 1810–1813 and 1815–1816, this company mounted productions at Gothenburg’s first official theatre Comediehuset, or Teatern vid Sillgatan, and subsequently, from 1816 onwards, at the newly built Segerlindska teatern.

Inga Åberg performed the part of Susanna in Beaumarchais’ play, The Marriage of Figaro, in September 1815 and in January 1816. Her daughter Wendla also appeared in the play, in the role of Fanchette. Nicolas Isouard’s Cendrillon was performed in May 1816 with Wendla once again as part of the troupe. As a form of encouragement Wendla received 50 per cent of the takings from this performance. The excellent violinist Mathias Lundholm had, just that year, returned as conductor – returning again in 1817 and in 1818 – before his final and permanent departure from Gothenburg. Thus, during Inga Åberg’s performances as Colombine in André Grétry’s opera Le Tableau Parlant in late autumn 1816, and her October appearances in her favourite part as Adolf in Den lille matrosen with music by Pierre Gavaux, it was probably Lundholm who was in charge of the musical side of the productions.

Inga Åberg returned to Stockholm for the 1817–1818 season. Fredrik August Dahlgren described it thus in 1866: “when she returned to perform [on 27 December 1817 in Grétry’s operetta Le Tableau Parlant] her former qualities appeared greatly diminished and her stay in the service of the theatre was but brief”. Nevertheless, she was granted a second ‘recett’ performance on 24 September 1818 in which she played the part of a waitress in Edouard du Puye’s sung play Agander och Pagander. The production ran a total of eight times.

Although Inga Åberg may have been considered to have lost her talent in Stockholm she continued to receive favourable reviews in Gothenburg. There she was considered to be one of the really good actors, not least because – despite her age – she displayed a “fresh and merry disposition”. When her brother, Gustaf Fredrik Åbergsson, put on a production of Rossini’s opera The Thieving Magpie, in March 1820 Inga Åberg played the part of Colombine whilst her 18-year-old daughter, Wendla, played a peasant girl.

Several months later, in December 1820 Inga Åberg’s brother put on a production of Shakespeare’s Hamlet. Inga Åberg appeared in the role of Queen Gertrude, whilst her brother played Hamlet. In 1821 she played the part of maid Justine in Desforge’s play La Femme Jalouse. Her brother allowed her to have a ‘recett’ in March for which she performed her favourite role of Adolf in Den lille matrosen. Her performance was lauded by a reviewer who described it as “fresh and snappy” and “like a talented relic from the time of King Gustaf III”. Inga Åberg played the part of maid Dorine in Molière’s Tartuffe in April and May, once again with her brother performing the title role. In August, Åbergssonska sällskapet mounted a production of Schiller’s Maria Stuart in which Inga Åberg played Queen Elisabeth of England. Reviewers commented that “Inga Åberg is one of the few who can trace her theatrical reputation from the […] time of Gustaf”. In December she played the role of the sister in Die Schuld a lyrical tragedy by Adolf Müllner. After this, in 1822, Inga Åberg joined a group of retiring actors. In May 1824 she appeared in Carl Stenborg’s troupe who put on a guest performance at Comediehuset or Saltängstheatern in Norrköping. The following year in Åbo she played the role of Elisabeth opposite Maria Sylvan in Schiller’s Maria Stuart at K G Bonuvier’s theatre. After this her status as an actor went into decline.

Inga Åberg died in 1837 from a so-called brain fever, or rather meningitis. Her daughter carried on for a few more years as a popular – and more socially acceptable – role of dance-teacher until her death in 1864. 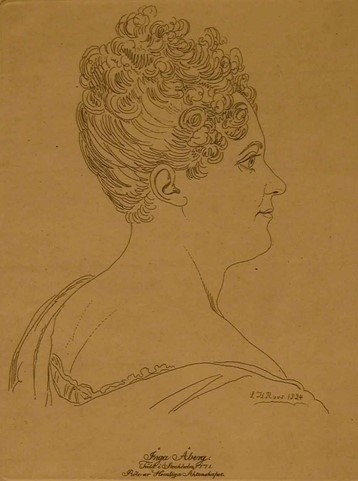