Inga-Bodil Vetterlund was an actor. She is a typical representative of the generation of actors which emerged during the 1930s reflecting the youthful and modern aspects of that era.

According to her own words Inga-Bodil Vetterlund grew tired of school when she was young and expressed a desire to become an actor. She was promised that she could go for that as long as she first gained qualifications in a ‘proper profession’. In her case this meant undergoing training as an office worker. Her first appearance in a walk-on film part was in the 1930 film adaptation of Selma Lagerlöf’s Charlotte Löwensköld. Following her first unsuccessful attempt to gain entry into the Dramaten theatre drama school she instead was taken on in 1932 by Oscar Winge, a theatre director. That same autumn, however, Inga-Bodil Vetterlund did get accepted at the Dramaten school and upon graduation in 1934 she began to appear in both films and on various stages, of such as Vasateatern, Blancheteatern, and Oscarsteatern. She gained a permanent contract in 1936 with Europafilm. She also made guest appearances at Svenska Teatern in Vasa during the autumn of 1940 and also worked at Riksteatern.

Following her marriage, during the 1940s, to a businessman named Taro Gadelius Inga-Bodil Vetterlund withdrew from acting. During various periods from 1948 onwards she lived in Japan as her husband was engaged in post-war efforts to reinvigorate the Gadelius trading company. Her first stint in Japan, initially in Kobe and then in Tokyo, coincided with a time when material items were sparse. She underwent quite an obvious sense of loss at having to give up her own career in order to become the hostess wife of a business man. Whilst in Japan she served as a programme host of Hylands hörna when the Summer Olympics were held in Tokyo in 1964. In 1970 Inga-Bodil Vetterlund wrote a travel guide, entitled Klart Japan. She return to stage performing during the 1960s and in 1965 she made her comeback at Stadsteatern Norrköping-Linköping (now Östgötateatern). At that time she also performed in a few minor film roles but she mainly worked on television and within its development section.

Inga-Bodil Vetterlund was, without doubt, an unusually aware and intellectually gifted actor of her day. This is particularly apparent in her well-written memoires which were published in 1978, entitled Världen är så stor. The book presents some non-too-flattering portrayals of various figures within the Swedish film- and cultural spheres. Several theatre- and film directors are presented in turn as stingy and fussy, particularly when it came to female actors who were generally underpaid for their work in comparison to their male counterparts. In the book Inga-Bodil Vetterlund emerges as a woman well aware of women’s rights and as one who asserts the right to equal pay.

Inga-Bodil Vetterlund died in the village of Le Lys, in Lamorlaye, France, in 1980. She is buried at the Norra kyrkogården (the Northern cemetery) in Umeå. 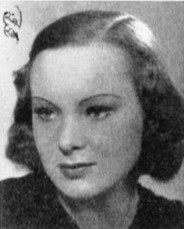