Princess of Norway, duchess of Halland, councillor of the Swedish and Norwegian realms

Ingeborg Håkansdotter was a Norwegian princess who also became the duchess of Halland and was thus a member of both the Swedish and the Norwegian privy councils. She is one of the first women of northern Halland to be named in an official document.

Ingeborg Håkansdotter was born in 1301. She was the daughter of the Norwegian king, Håkan V, and his wife, Queen Euphemia. At the age of 1 she was betrothed to the 19-year-old Duke Erik, the brother of King Birger of Sweden. This marriage – as was the norm at that time – was a purely political matter. At one point the engagement was broken off due to differences of opinion between King Håkon and Duke Erik, but following a reconciliation Duke Erik was again accepted as the Norwegian king’s future son-in-law. By 1312, when Erik and Ingeborg Håkansdotter finally did marry in what is now Oslo, Erik and his brother Valdemar had already forced King Birger to cede them two-thirds of the Swedish kingdom. Thus, aged just eleven, Ingeborg Håkansdotter already ruled over a significant area of land. Meanwhile Erik had already received from his future father-in-law, the king of Norway, the fortifications of Raghnhildsholme along the Göta river near modern Kungälv, Hunehals in the Kungsbacka fjord, as well as Varberg.

Following the wedding Erik and Ingeborg Håkansdotter moved between various fortified dwellings: Axvall in Västergötland, Ragnhildsholme, Hunehals, and Varberg. It was not long before Ingeborg Håkansdotter gave birth to two children, namely the future King Magnus, born in 1316, and his sister Euphemia, born in 1317. Shortly after Euphemia’s birth King Birger retaliated against his brothers. He invited Valdemar and Erik to Nyköpingshus, imprisoned them there and they eventually died in captivity.

It was at this point that Ingeborg Håkansdotter’s period as an important political figure began. She, along with her cousin and sister-in-law, Valdemar’s wife Ingeborg Eriksdotter of Norway, had already become the leader of the duke’s faction following Erik’s imprisonment in Nyköping. On 16 April 1318 an agreement, between the two duchesses named Ingeborg and the Danish duke Kristoffer of Halland-Samsö and Archbishop Esger of Lund, was signed in Kalmar. The duchesses, as their husbands’ representatives, promised that the promises made as conditions of the agreement would be honoured by their husbands if Kristoffer and the archbishop helped to free them from captivity and did not make peace with Kings Erik of Denmark and Birger of Sweden without their permission. This agreement became null and void given that both Erik and Valdemar died shortly thereafter in captivity. Further, Ingeborg Håkansdotter’s father – the king of Norway – also died. Thus her son, young Magnus, became king at just three years of age. Håkan V had no sons of his own. Magnus was also, in 1319 on Mora meadow, elected king of Sweden, thereby creating a personal regal union between the two kingdoms.

Ingeborg Håkansdotter, as mother of the future king, therefore became head of the minority government, landing her in a position of significant influence. She was a member of both the Norwegian and the Swedish privy councils. She and her cousin, along with Mats Kettilsson, held the chair of the latter. The title she used was “Ingeborg by the grace of God daughter of King Håkon Duchess in the Svea kingdom”. She ruled over an extensive geographical area, which included her morning gift of the castle and county of Axvall as well as a large number of strategic fortresses, counties, and fiefs in Västergötland, Värmland, Halland, and Bohuslän.

When she, on behalf of her son, wrote off the city of Riga’s debts to her late husband in 1320 her enemies accused her of behaving arbitrarily. She was also accused of rewarding her supporters and thereby strengthening her standing amongst her late husband’s former supporters. Obviously the first to accuse her of this – which included fellow members of the privy council – felt threatened by Ingeborg Håkansdotter’s strengthening of her position. However, when she is compared to other regents in the era, her actions were neither better nor worse than those undertaken by others. Creating and breaking alliances and increasing one’s number of minions were normal methods of strengthening one’s power base. Ingeborg Håkandsdotter had learnt from both her father and her husband. What was unusual was that she, as a woman, was in such a position that enabled her to exploit the same power ploys of which her male counterparts made use.

The Swedish privy council also worried that instead of relying on older, more experienced, Swedish-born men (as they put it) Ingeborg Håkansdotter was surrounded by a cohort of young men and advisors – many of whom were foreign. One of these young men was Knut Porse, who had fought in support of Erik and had been appointed commander of Varberg. Eventually Knut Porse became her second husband: a perfect ally who then bore the title of Duke of Halland and Samsö.

Ingeborg Håkansdotter and Knut Porse quickly realised that they had to strengthen their position. One way of doing this was to arrange a marriage between her daughter Euphemia and Albrecht of Mecklenburg (known as Albrecht the great). The marriage contract compelled Mecklenburg, Saxony, Holstein, Rensburg, and Schleswig to support Sweden in its attempt to conquer Scania. The marriage, which was only completed in 1336, came to have a major impact on Sweden as the couple’s son, Albrecht, would eventually become king of Sweden. The marriage contract, signed by Ingeborg Håkansdotter and Porse, was accepted by the Norwegian privy council but the Swedish council rejected it. Ingeborg Håkansdotter used a loan from Stralsund – where she introduced toll-free access to Sweden and Norway as security – to finance the invasion of Scania. Knut Porse invaded Scania in 1322, but Mecklenburg betrayed the duchess and her husband, choosing instead to support the Danes. Porse’s attempt to conquer Scania failed.

Relations between the privy council and the headstrong, independent duchess increasingly soured, deteriorating into open conflict in 1322. That year the privy council decided that all of Ingeborg Håkansdotter’s actions should only be authorised by a general vote and therefore that all agreements previously made were now null and void. Ingeborg Håkansdotter was not only forced to accept this in 1323 but also to withdraw from a series of important forts. On 20 February 1323 the Norwegian privy council also fell into a dispute with her. She was accused of abusing the royal seal and for breaking the peace with Denmark. Although she did not lose all her Norwegian privileges, from then onwards her decisions were only accepted by the Norwegian privy council if the council supported them unanimously.

The failed Scanian invasion significantly reduced Ingeborg Håkansdotter’s influence. In February 1326, at Skara, she signed an agreement with the Swedish privy council which altered her standing in Sweden. She had to cede Axvall county, Värmland, five strategic forts in Västergötland, and Hunehals castle in Halland to the king and she had to send Porse into exile. In return for this she would receive the less strategically important unfortified Dåvö in Västmanland and her debts would be paid.

These changes meant Ingeborg Håkansdotter had no political authority in Sweden although she continued to hold some sway in Norway. However, once she married Knut Porse in 1327 she also lost what little influence she had in Norway too.

Knut Porse died in 1330, after which Ingeborg Håkansdotter went to live near her son, King Magnus Eriksson, but not much is known as to whether she in any way influenced his reign. She still enjoyed enough social standing to welcome Albrecht of Mecklenburg, her daughter Euphemia (Albrecht’s wife), and Rudolph of Saxony and Henry of Holstein to Kalmar with her own fleet in 1336. The guests had come to Sweden to attend King Magnus’ coronation in Stockholm. Magnus Eriksson purchased the duchy of Southern Halland from the Danish king in 1343, increasing his influence as he already held Northern Halland. Following the death, of the plague in 1350, of the sons Ingeborg Håkansdotter had borne to Knut Porse she was henceforth known as the ruling duchess of Halland. 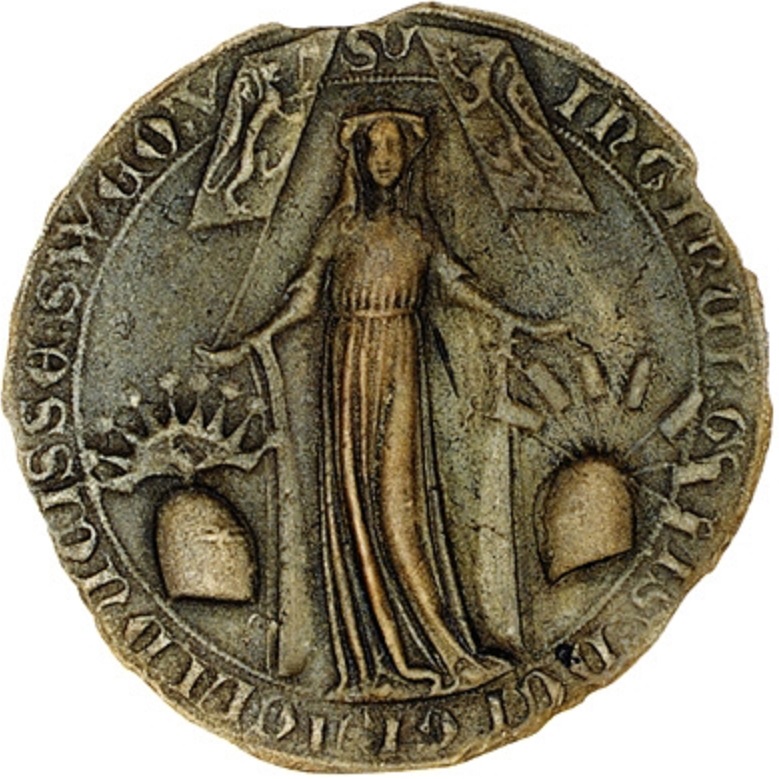