Marianne Westman was born in Falun in 1928. She was the eldest child of three born to wholesale merchant Tore Westman and Margit Söderqvist. She grew up on a merchant’s farm along with her family and several other relatives. Her mother was an excellent cook and a legendary cook-to-order for special occasions figured amongst her forebears. Marianne Westman based her future work on the experiences she had had in her childhood home and household.

After having attended a girls’ school Marianne Westman enrolled at Konstfackskolan (the school of arts, crafts, and design) in Stockholm in 1946. She graduated four years later, having completed a new programme focused on commercial work. Fredrik Wehtje, the MD of Rörstrand, headhunted her to work for the porcelain company. When Marianne Westman, then aged 22, arrived at Rörstrand to take up her job Hertha Bengtson was already there working on her tableware set called Blå eld.

It was expected that Marianne Westman, being a new employee, would work with beige-coloured earthenware, however she and Lore Schuldt, the new laboratory head, came up with an entirely white product which proved to be perfectly suited to the ceramic goods produced during the 1950s. The very first tableware in this material that was designed by Marianne Westman was called Frisco and it comprised both food and drink ware. It was ovenproof and bore a printed pattern of blue and red fish on a chalk-white background.

In 1952 the four young female ceramics at Rörstrand – Hertha Bengtson, Maria Hackman-Dahlén, Sylvia Leuchovius, and Marianne Westman – held an exhibition at the new factory premises on Birger Jarlsgatan in Stockholm. A writer for Form noted that Marianne Westman’s ovenproof household items such as Frisco were pleasingly firm, both in terms of shape and appearance. The work of this debut artist was welcomed for its “fresh kitchen appeal”. Another of her creations launched at the exhibition, the Mon Amie teapot, elicited praise from the Dagens Nyheter correspondent.

Mon Amie was in fact Marianne Westman’s most popular tableware and it gradually expanded to number 40 items. The idea for the pattern on the tableware had come to her one midsummer’s eve when she was picking some sweet-smelling Northern Labrador tea. She drew a stylised version of the flower, reworking the motif during a summer-job at the Gabriel factory in Småland. She then returned to the motif at Rörstrand. The cobalt blue Mon Amie pattern of four-leaved flowers with glazed pistils almost entirely covers its white background. This kind of dense pattern was innovative, giving off both a youthful and a romantic vibe. The tableware was in production from 1952–1987 in hard-paste porcelain and during the mid-1960s it was awarded a prize for its exceptional service.

Marianne Westman sourced the motifs displayed on tableware sets such as Pomona, produced during 1956–1971, and Picknic, dating from 1956–1969, from garden landscapes. She hand-painted graphic patterns of onions, peas, carrots, and beetroot, amongst other things, in vibrant colours and surrounding them with printed black contours. These were produced in ovenproof earthenware thus, Hertha Bengtson and Marianne Westman had intended, making them suitable for oven-to-table use. An innovative twist of Marianne Westman’s practical tableware service was that it included random extra pieces such as bread-boards, butter-dishes, and storage jars. She viewed a table setting as a unit and thus created complementary patterns on table-cloths, towels and place settings. Several of her patterns were printed at the Westman Textil och Designateljé in Falun which was run by Marianne Westman’s siblings, Bror, Ingalill and her mother Margit.

During the 1950s Rörstrand returned to producing children’s tableware sets, ten of which were designed by Marianne Westman. Her children’s sets bore narrative designs in which the story unfolded from the mugs to the deep bowls and the flat dishes. Göran, Pip, Firre, and Pippi-Bofink were the names of some of her patterned children’s ware.

On one of her study tours abroad Marianne Westman had come across grey stoneware with a salt glazing produced by German factories. She persuaded Rörstrand to follow suit. This new stoneware could tolerate being moulded, dried, decorated, and glazed before it was fired, leading to major profit for the company.

At the end of the 1950s Marianne Westman came up with fun studio-produced jars with teak lids. They were made of stoneware and were decorated with hand-painted u-shaped patterns in cobalt blue. The black-contoured label on the spice jars bear the name of the spice in clean text. The larger jars bear labels with texts such as Mors godaste sylt (mother’s best jam), Lingon (lingonberry), Sylt (jam), and Sill i dill (dill herring). Jars displaying simpler patterns were also produced for other items but each label is written in the same rounded style.

During the 1960s Marianne Westman adopted the names of her female relatives from Dalarna for use in her sets of stoneware table goods. These studio-produced rustic table sets in green and blue bore names such as Lotta, Ida, and Elisabeth. Lotta and Elisabeth are decorated with a broad hand-painted band of colour. In 1964 Marianne Westman released her first purely artistic work. This is a unique item of stoneware, glazed in green or grey celadon, where the lower part of the item is left unglazed. Marianne Westman won the gold medal at Faenza in Italy for this stoneware while she was awarded Die Gute Industriform from Germany for her Elisabeth table set. Marianne Westman was awarded yet another gold medal in Faenza in 1970, this time for the ovenproof tableware called Peru, glazed in a dark-brown metallic sheen.

In 1964 Marianne Westman produced a ceramic relief called Spegeln for Eskilstuna’s cultural centre as well as a relief for the Sörby school in Gävle in 1965.

Rörstrand was bought out by Uppsala-Ekebykoncernen resulting in 200 ceramics workers and all the resident artists being made redundant in the autumn of 1970. This included Marianne Westman, who was responsible for about 45 per cent of the designs at the factory. She spent two weeks during the summer of 1971 painting new decoration proposals as she did not want others to decorate her models. She painted coloured border patterns, in orange and brown-greens, which were right on trend. The tableware was named Annika and was a great hit, remaining in production until 1981. She produced the Mira-Mar set in a similar way.

From 1972–1977 Marianne Westman was a freelance designer at Skrufs glassworks. She created the bulge-shaped household goods set Le Chef which also included cork-topped bottles intended for oil and vinegar, stackable bowls for snacks, wine carafes and more. She put chequered cloths on her glass jars and the packing material was decorated with homey chequered material. She also designed cheese-boards, which, following their first showing at the Frankfurt exhibition in Germany, were copied by other companies, along with the chequered cloths.

Marianne Westman, who had won six international gold medals and other merits in international competitions – in the USA and in Europe – since 1954, began to work as a contracted designer for the Hutschenreuther AG porcelain company in Germany in 1972. Although she had great success with her tableware sets called Set for Singles, Hot set, and Kristina, they never made it to the Swedish market due to the high exchange rate for the D-Mark. She herself – in an interview from 2008 – stated that her best tableware was in fact Hot set.

Following a career spanning 21 years at Rörstrand and 21 years in Germany Marianne Westman retired. She returned for good to her childhood hometown of Falun in 1993. She participated in the new retro-trend of the 2000s by allowing Mon Amie to be relaunched in an enlarged format as a modern collection of mugs, bowls, and plates. Marianne Westman also collaborated with the Almedahl company and several of her 1950s designs resurfaced as patterned cloth, hand towels, napkins, throws, ovengloves, pillows and other items including trays and plates.

Marianne Westman died in Falun in 2007. She is buried at the Hosjö cemetery outside of the town. 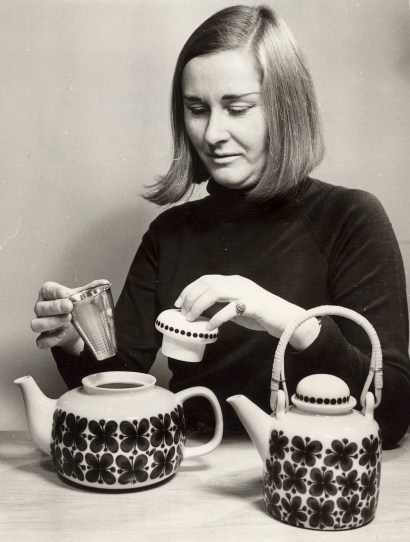