Ingeborg Uddén was an artist and an illustrator, active during the first half of the twentieth century.

Ingeborg Uddén was born in Strängnäs in 1877. Her parents were Axel Uddén, a teaching assistant, and his wife Selma née Gerle. Ingeborg Uddén was the youngest of three children. Although her father died when she was only a year old her mother successfully provided for her three children and ensured their education. Ingeborg Uddén was able to undertake studies at Högre konstindustriella skolan (now Konstfack, University of Arts, Crafts, and Design) in Stockholm. The school produced qualified painter decorators, ornamental sculptors, furniture designers, and engravers as well as book illustrators, the latter of which was Ingeborg Uddén’s sphere of focus.

Ingeborg Uddén graduated in 1898. Shortly afterwards, she was commissioned to produce a book cover. One of her first creations was for Oscar Levertin’s Rococo-noveller, published in 1899. She proceeded to create book covers for several prominent Swedish authors, including Selma Lagerlöf, Sophie Elkan and August Strindberg.

Ingeborg Uddén was awarded an advance of 500 kronor by the Swedish National Board of Trade, which enabled her to undertake a study tour to Denmark, Germany and Italy. She summarised her experiences in an article for the magazine Meddelanden från Svenska Slöjdföreningen in 1904. During her travels she spent some weeks in Leipzig and then went to Rome and Sienna, where she ambitiously studied ancient Italian book art and turned her hand towards archival research. She was no fan of the contemporary Italian examples but took a shine to Danish book art, which she had come across at the major exhibition held in Stockholm in 1897. While she was in Germany she was impressed by the Jugend style and was later able to represent it in her early artwork.

Ingeborg Uddén is primarily known for her contribution within the field of children’s books, a field that employed many young women in Sweden during the early twentieth century. This was a heyday period for calendars, Christmas magazines and picture books, and Ingeborg Uddén worked on a variety of such items from every category. From the early 1900s she supplied illustrations for the children’s book series known as Saga-biblioteket. Her early efforts show a confident hand and her images reveal a strong connection to the national romantic tradition of illustration. In 1909 she produced the illustrations for the book Liten vallpiga, which was based on an ancient folksong about a wild child who comes to the royal court and is made queen. The illustrations comprise a number of scenes in a medieval setting, drawn using bright colours and sharp contours. A couple of years later, in 1911, an entirely different picture book was published, entitled Fru Kajsa Rulta och hennes katt. This book was inspired by English nursery rhymes that Ingeborg Uddén had independently transposed for a Swedish readership. Her illustrations reflect both a sense of humour and exuberance, portraying the comfortable relationship between the cat and woman as happy and cheekily playful. The rustic home environment that they exist in is well defined by the artist’s use of detail and the red-green colour palette, as befitted the contemporary national-romantic trend.

The year 1924 saw the publication of Ryr, an illustrated humorous tale of the difficulties faced by a young peasant in his agricultural surroundings. The somewhat stiffly drawn images are framed by an incongruous radiance. The children’s nursery rhyme Kråkan, published in 1927, is illustrated in a simplified style, using softer contours and a paler palette. Indeed, from the 1920s onwards, Ingeborg Uddén seems to appear less confident in her style than she had been earlier.

Ingeborg Uddén is probably best known for being one of the illustrators of Sörgården and I Önnemo, reading textbooks supplied to first and second year classes in primary schools. These were published between 1913 and 1936 in a total number of one million copies. Nearly every Swedish schoolchild at this time learned to read using these books, thus making the rural lifestyle portrayed within them universally familiar. The public educator and school teacher Alfred Dalin had intitiated the project was its leader. Anna Maria Roos was responsible for the contents. The illustrations were primarily provided by Brita Ellström and Ingeborg Uddén, although Stina Beck-Friis also supplied some. Ellström created most of the illustrations for Sörgården whilst Ingeborg Uddén produced the majority in I Önnemo. The fictitious places in these children’s books, Sörgården and the parish of Önnemo, represented a rural idyll, easily recognisable thanks to its mainly village-dwelling residents who were still familiar with the agricultural rhythms of the changing seasons. One of Ingeborg Uddén’s illustrations portrays Norrvalla manor farm, located near Sörgården. The illustrations depict children heading for a larger building, the gable of which peaks out through a leafy garden. In the foreground there is a rose bush in full bloom. The scene’s composition is well thought-out and includes a depth of perception and strong contours. Ingeborg Uddén, further to the children’s book illustrations and contributions to magazines aimed at that particular readership, also produced greeting cards for Christmas and Easter. The Jugend-inspired style evident in her early cards, gradually morphed towards more subtly-framed images and a different use of light and shade.

Ingeborg Uddén never married. She died in Stockholm in 1960 and was buried in Gamla kyrkogården (the old cemetery) in Strängnäs. 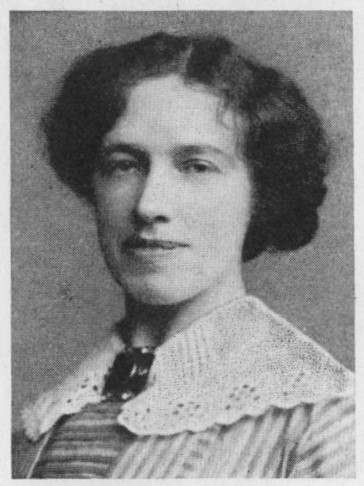