Inger Rudberg was a teacher and popular educator, a debater and activist, a genealogist and home district researcher. She was also a researcher into women’s history.

Inger Rudberg was born in 1922 in Skagen in Denmark, where her father Carl Norborg was the pastor in the Swedish church in Skagen and other North Sea ports. Her mother Karin Lundström was born in Fjällbacka on the Swedish west coast, and her parents had met during her father’s time as a preacher there.

Both parents’ origins strongly influenced Inger Rudberg. During her youth, she was mainly influenced by her father, while her mother influenced her adult years to a greater degree. Carl Norborg was born in a clergyman’s home in Gothenburg, and Karin Lundström was born in a fisherman’s family in Fjällbacka. Her parents’ marriage was an unusual alliance. They had a good start however by beginning their life together in Skagen, with a congregation of mainly Swedish west coast fisherman.

In 1926, when Inger Rudberg was three and a half, the family and all their possessions were shipped in a fishing boat from Skagen to Munkedal in western Sweden, after her father had been appointed vicar in Foss and Håby. Foss vicarage, in classic style and surrounded by a large park, gave Inger Rudberg and her two younger siblings lifelong memories. Their home was hospitable and Inger Rudberg described for example the visits of Jeanna Oterdahl and Signe Wranér. The latter afterwards sent a new volume from the children’s book series Barnbiblioteket Saga to Inger Rudberg every Christmas. During and after the war years, the family’s life was influenced by Carl Norborg’s strong engagement for Finland. He founded the west Swedish church’s aid to Finland, organised a comprehensive collection of money and started a home for Finnish children in Munkedal. Many Finnish wartime children were also sent on to foster families all around the county of Bohuslän.

After completing her elementary schooling, Inger Rudberg attended a girls’ school in Uddevalla, where she live in a school household, a flat rented by some vicars’ families as a home for the families’ young people during the school weeks, with an employed matron. Inger Rudberg then continued on to the Latin programme at the town’s grammar school until she matriculated in 1943. After that, she chose to train as a teacher and after qualifying at the elementary teacher training college in Falun in 1945, she worked at various elementary schools in Munkedal, Björneröd, Västerfärnebo and Eksjö.

At the end of the 1940s she met Stig Rudberg, a classical philologist living in Uppsala, who was born in the province of Västergötland and spent his summers in Bohuslän. He was the son of Margit Hemberg and Yngve Rudberg, the dean, later the bishop, in Skara. Stig and Inger Rudberg married in 1949, and suitably enough, an almost one-year stay at the Swedish Institute in Rome on a scholarship awarded to Stig Rudberg could serve as a honeymoon. While her husband did research in the Vatican library, Inger Rudberg immersed herself in art history as a foundation for future studies.

Once back in Sweden, the couple settled in Uppsala, and during the years 1952–1964 Inger Rudberg had five children and also took her M.A. in art history, literature history and English. She wrote TV reviews in Upsala Nya Tidning and started teaching at evening classes. In 1966, the family moved to Lund after Stig Rudberg had been appointed professor of Greek there. Inger Rudberg stayed in Lund for the rest of her life and rooted herself there more and more. However, she always spent her summers in Bohuslän.

When the children had grown up, Inger Rudberg spent a year at the teacher training college in Malmö and then taught in various schools in Skåne, of which a longer period with immigrant children in Svalöv, before she concluded her teaching career at the adult education organisation Komvux in Lund. During the years in Svalöv, Inger Rudberg came in contact with refugee families. When they were threatened with expulsion in a number of cases, she put in a great deal of effort to make it possible for them to remain in Sweden, with debate articles, name lists, and contact with politicians. In at least one case, she succeeded, since she had met the immigration minister Karin Andersson alone and put forward the family’s case to her.

As a diligent debater and activist, she was also engaged with all her might in the peace movement, Folkkampanjen nej till kärnkraft, against the bridge over Öresund and other environmental issues, not least threatened cultural environments. In this field, she wrote numerous letters to various editors in newspapers in Lund and Bohuslän. For a short while, she held various political posts for the Environmental party in Lund, but that type of work did not suit her. Other issues that engaged her interest were language care and women clergy.

Inger Rudberg collaborated on a great number of cultural articles, mainly in Bohusläningen. Via Sveriges Radio’s Värt att veta, she acquired a national stage for her popular lectures. She enjoyed talking about strong women, and several of her contributions can be read in an anthology with the title Starka kvinnor in 1986. She invested great engagement in Vänskapens hus in Lund, where for many years she participated in the planning of lecture evenings and also gave lectures herself. When the school building where Inger Rudberg worked was to celebrate its 150th jubilee, she was engaged to write its history in 1987, a book that featured personal histories and women’s history: Ett gammalt skolhus i Lund. Magleskolan 1836-1986. Från fattigskola till Komvux.

After her retirement, Inger Rudberg was able to devote herself entirely to research, writing and popular education. Her links with Lund and Skåne deepened when she realised that she had deep roots there through her paternal grandmother, and she began to be interested in Skåne’s cultural history. Inger Rudberg’s paternal grandmother had been born Wåhlin, and she spent a good deal of time doing research on that family of clergymen and learning. In 2001, she published the book Söta Louise och ollonfläsk about the dean Lars Peter Wåhlin’s and his wife Louise Adrian’s lives and correspondence at the beginning of the 1800s. Inger Rudberg’s research and her fight for cultural environments often had a good deal to do with each other. One eloquent example is the book Tre gårdar i Lund. Kring familjer och miljöer under 250 år from 1995, in which all three properties were threatened by demolition or other radical transformation.

During a couple of decades, she put a lot of work into the association Föreningen för Fjällbacka, mainly through many articles in Fjällbacka-Bladet, often interviews with older inhabitants but also through cultural and historical guides, the production of information signs on older buildings and much else. Her last great test of strength was the book De levde på Fjällbacka strand. Bilder och berättelser från Fjällbacka, Mörhult och öarna from 2012, with many pages. She worked on it for many years, collecting a comprehensive material on the history of the community, mostly written by herself and with extra focus on her mother’s family. Bohusläningen had the heading “90-year-old woman publishes 1,000-page book on Fjällbacka” and the magazine Släkthistoriskt forum followed up with “woman behind Sweden’s most comprehensive family history book”. Inger Rudberg had already been awarded the Tanum municipal culture prize in 1994, and in 2013 she was elected as “Fjällbacka resident of the year”.

Inger Rudberg was extremely active all her life and to a high old age. She was an energetic and versatile woman with an almost restless desire for action in many different fields. One distinct and strong interest throughout her life was to do research on and emphasise conditions for women during different periods and in different social classes, and also women pioneers in various fields. During her last years, Inger Rudberg worked on her memoirs (unpublished). She had also written many poems since her youth, of which a few have been published.

Inger Rudberg died in 2019, having just turned 96 years of age. According to her own wishes, she was buried in Fjällbacka Cemetery, not far from her maternal grandparents’ grave. 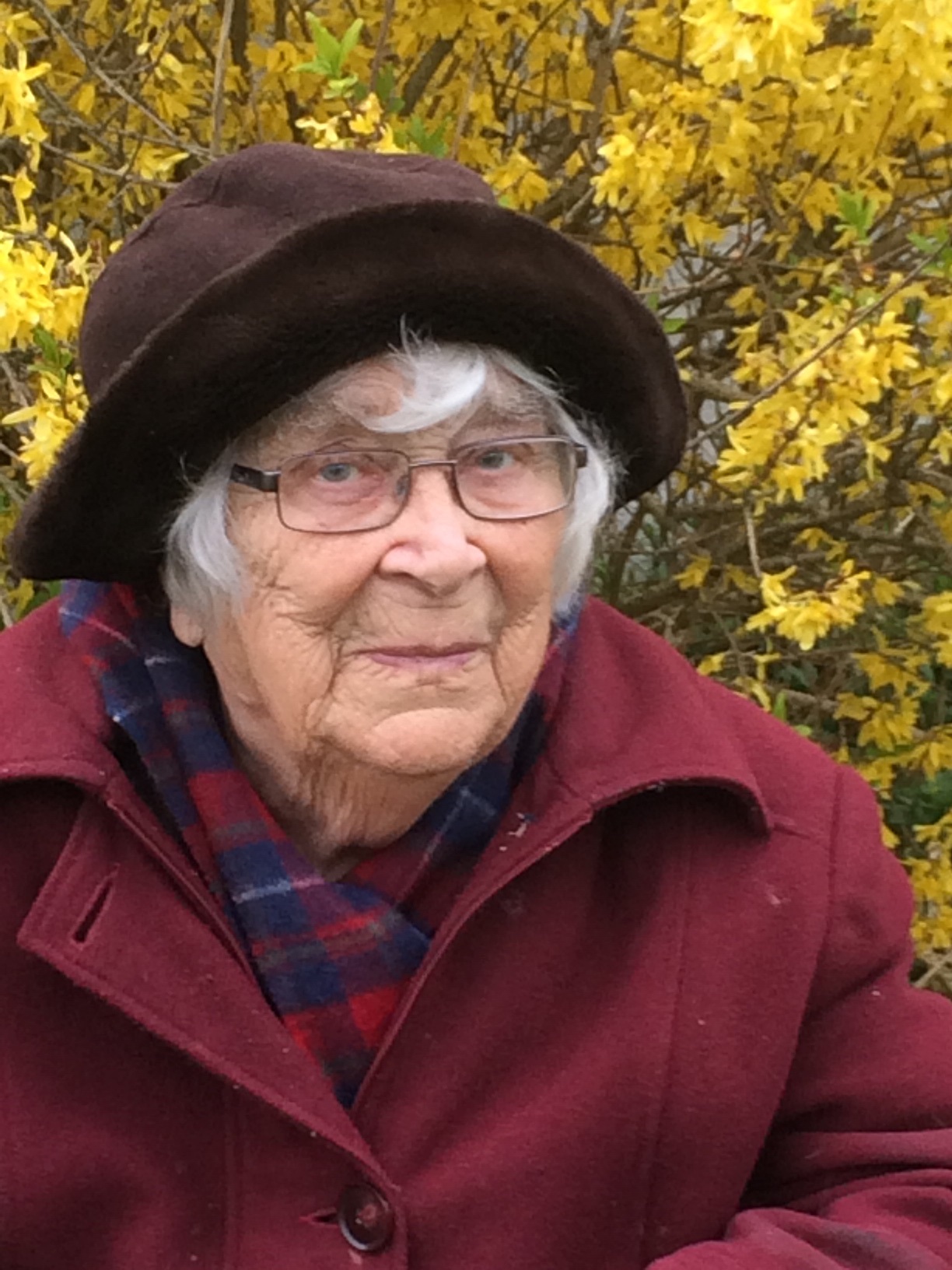