Ingrid Atterberg was a leading designer within the Swedish modernist movement. She produced ceramic work which found wide distribution within “folkhemmet”, the distinctly Social Democratic expression of the Swedish welfare state.

Ingrid Atterberg was born in Härnösand in 1920 and spent her childhood in Gothenburg. Her father was head of a radiotelegraph section within Kungliga Telegrafverket (national telecommunications agency) where her mother was also employed. Ingrid Atterberg, the third of five children in the family, followed her sister Brita – later married as Ahnoff – down the artistic route. From 1940–1942 she attended Slöjdföreningens skola, today known as a part of HDK-Valand - Academy of Art and Design at the University of Gothenburg, where her main subject was ceramics. Ingrid Atterberg briefly ran her own workshop in Gothenburg. She then moved to Uppsala in 1944 where she was employed as a designer for Upsala-Ekeby AB ceramics factory. Her colleagues there included Anna-Lisa Thomson and Vicke Lindstrand, the latter of whom had been appointed as artistic director in 1942.

Although the Swedish ceramics industry had appointed its first female designer in the early 1900s, Ingrid Atterberg and her fellow female colleagues who joined the industry almost half a century later nevertheless still belonged to a pioneering cohort. The position of artistic director still tended to be filled by a man, as was the position of technical manager, sales manager and many other managerial posts. Although factories were keen to hire female designers these women did not often find reception for their ideas and their efforts did not often gain full recognition. Later on, Ingrid Atterberg sometimes provided dramatic descriptions of the conditions which she and her fellow female designers endured as workers at Upsala-Ekeby during the 1940s and 1950s.

Meanwhile, Ingrid Atterberg benefited from a very good working relationship with Vicke Lindstrand, the aforenoted artistic director at the factory during the 1940s. As a newly-employed designer Ingrid Atterberg was given a lot of space to revitalise the output at the factory. A special section was set up for her so-called workshop products, turned and decorated by hand. This method of working reflected a general trend: several Swedish ceramics factories focused on increasingly hand-made items.

Ingrid Atterberg, who had a journeyman’s certificate in turning, was a thoroughly accomplished potter who had also mastered the chemistry of glazing and firing techniques, quite unusual skills amongst the majority of ceramic designers. She was behind several technological innovations introduced at Upsala-Ekeby which proved to be very significant. For example, she added manganese oxide to the usual red-coloured clay used at the factory in order to darken the colour. This so-called ‘black clay’ was heavily used during the 1950s when it became popular to leave parts of the products unglazed, allowing the darker clay to create an effective contrast to the white or coloured glazing. Ingrid Atterberg also produced a series of items called ‘Sintergods’, a highly-fired clay product which technically and artistically resembles stoneware. Ingrid Atterberg’s method involved mixing the chamottes (small grains of crushed fired clay) with muddy clay, to which a metallic sheen was applied after turning the clay, in contrast to the prevailing earlier method of mixing it in with the turned clay which was particularly harsh on the turners’ hands.

Ingrid Atterberg’s early 1940s output often involved using stylised flower designs, but she soon began to use abstract designs which were more reflective of contemporary painting styles. During the 1950s she created several series of models which are now considered to be classics of modernism, such as Grafika, Negro, and Mimosa. Her designs are typically elastic, sometimes asymmetric shapes with decorations that are etched, carved, or painted with great care. In addition to her output at Upsala-Ekeby Ingrid Atterberg also produced work at Karlskrona Porslinsfabrik (porcelain factory) and Gefle Porslinsfabrik, both of which belonged to the same industrial group. Today Ingrid Atterberg is best known for her series of ceramic receptacles, including vases and bowls, although she also designed household items and produced several ceramic pieces for public spaces, including a large decorated tiled wall for Timrå swimming baths in 1956. She also produced public works abroad, such as several wall decorations for Tegelen community housing in the Limburg province of The Netherlands and an enamel painting for the entrance hall at Pharmacia Laboratories in Piscataway township, New Jersey, USA.

Ingrid Atterberg was concerned about the rights of industrial designers and worked actively to improve their working conditions both by placing demands on her employers and through organised activities. She was actively involved in setting up Sveriges konsthantverkare och industriformgivare (KIF, Swedish applied art producers and industrial designers) association in 1961 and the following year she was elected onto the association board. Other board members included Stig Lindberg (Gustavsbergs porslinsfabrik), and Marianne Westman (Rörstrands Porslinsfabrik).

In 1963 Ingrid Atterberg resigned from her job at Upsala-Ekeby having become disillusioned with the way the factory was going. She felt that the artists who worked there had seen their room for manoeuvre being successively reduced and she was dismayed that the factory hierarchy was seeking to mechanise production, which included the hiring of time-management specialists and that items originally designed to be turned by hand were instead to be die cast. Ingrid Atterberg, who had already produced work for Alsterfors and Målerås glassworks during the 1950s and the Italian ceramics factory Mancioli Natale in Montelupo near Florence, spent a few years working freelance before establishing her own pottery in 1969, located in an extension at the family house in Uppsala. Her husband, Viking Göransson, served as architect for both their house and the extension. He had previously worked for Gunnar Asplund ahead of the 1930 Stockholm Exhibition and had served as county architect for Uppsala county from 1944–1956.

At her workshop Ingrid Atterberg mainly produced hand-turned items that were glazed in vibrant reds, oranges and purples. In contrast to her previous job at Upsala-Ekeby she rarely created etched or carved decorations but focused instead on the expressive form of the glazing which often produced sophisticated, multi-layered, craquelure-type patterns. These only appeared after several firings. Ingrid Atterberg was active up to the mid-1990s and displayed her ceramics at a great number of exhibitions in both Sweden and abroad.

Ingrid Atterberg died in 2008 and is buried at Gamla kyrkogården (the old cemetery) in Ludvika. 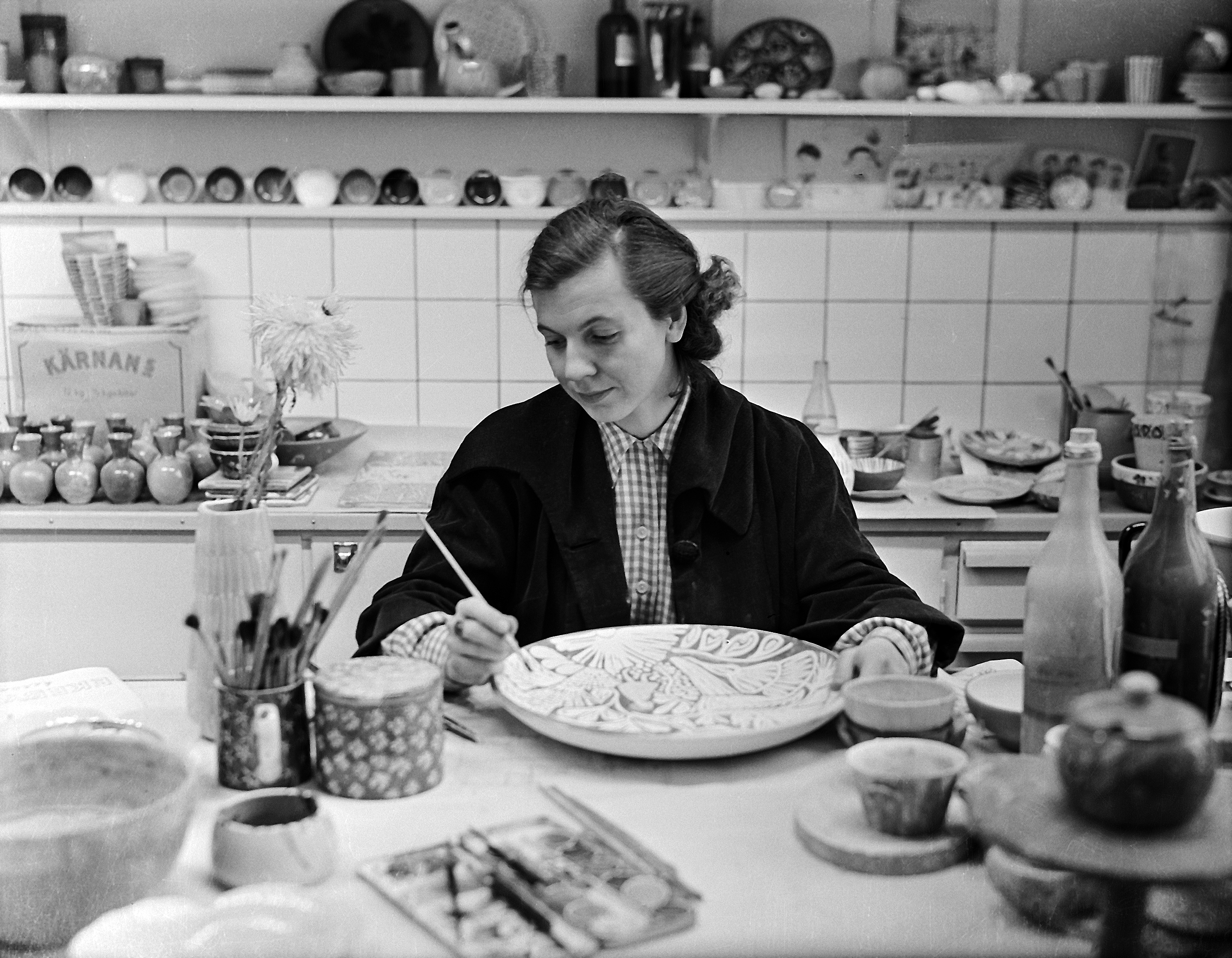