Ingrid Gottfries was a physician of psychiatry who worked at the Lund hospital, Vipeholm, St Lars hospital, and at the psychiatric outpatient clinic in Lund. She was also a very keen genealogist and wrote a number of books on her family history and local area.

Ingrid Gottfries was born at Gamlegård in Borrby, Simrishamn municipality, in 1926. She was the sixth child in a family of eight. Her father, Julius Gottfries, was an agronomist and a politician. He was also a teacher at Rösiö, Tomelilla and Hammenhög agricultural schools. Ingrid Gottfries’ mother, Ragnhild Gottfries, shared her husband’s interests in agriculture and agronomy. She was also politically active, serving as chair of the Svenska landsbygdens kvinnoförbund (SLKF, later Centerns Kvinnoförbund, CK, now Centerkvinnorna) (Swedish Rural Women’s Association), and she ran for a parliamentary seat in 1944.

The farm where Ingrid Gottfries and her seven siblings grew up spanned 32 hectares and featured extensive fruit- and seed-nurseries. Several of Ingrid Gottfries’ siblings went on to become prominent members in their respective fields. Her sister, Charlotte Weibull, became one of the nation’s most eminent folk artists and doll-makers. Her brother, Carl-Gerhard Gottfries, who like his sister became a doctor of psychiatry, is still active as a professor emeritus at Gothenburg university.

Ingrid Gottfries graduated from Allmänna läroverket in Malmö in 1946. Three years later she became a medical graduate, having registered at the medical faculty in Lund in 1947 and gaining her qualifications in June 1949. In 1956 she gained her medical licentiate. Whilst she was studying and narrowing her focus, from 1952–1956 and from 1957–1962, she also worked as an assistant and junior doctor at the psychiatric clinic and children’s psychiatric clinic at Lund hospital. For a brief period, from 1955–1956, she also worked at Vipeholm hospital. She then worked at St Lars hospital in Lund from 1962 until 1984, initially as a junior doctor within the hospital research department and later as chief physician at Klinik C. Prior to that Ingrid Gottfries had been the convener of Kriminalpolitiska sällskapet in Scania, from 1969 to 1971. During this period she also served as editor and publisher of the magazine Kontakt and she was actively involved in setting up the Måndagsklubben patient association.

When Ingrid Gottfries was working at the research department of St Lars hospital she met the psychologist Sven Marke who was developing various types of tests to measure personality. They published a couple of articles together towards the end of the 1960s. At this time Marke fell under the influence of the Danish psychologist Wulff Feldman and in June 1969 the Gruppterapeutiskt Forum was set up. A psychology student, Lejf “Daggis” Blomquist, who was a friend of Ingrid Gottfries, also worked within the framework of the Gruppterapeutiskt Forum and became a pioneer of psychodrama, a group therapy treatment. This method was soon thereafter introduced at St Lars hospital, in part due to the fact that Ingrid Gottfries found it of interest.

Ingrid Gottfries has been described as a fearless and controversial head of clinic. During the 1970s changes occurred at the psychiatric department at St Lars hospital and several new treatment methods were introduced. Ingrid Gottfries prioritised action therapy, psychodrama, family therapy, and ADL as the most important methods. Those reports in which she had input reveal her to be a chief physician who relied on reasoning and reflection. “It is hard to be a doctor within the field of psychiatry”, she wrote. She also mulled over the therapeutic tradition in which she had been schooled and reflected on the role of chief physician. She highlighted the connection that she was able to forge with both her colleagues and patients through the psychodrama group, particularly with the latter which she otherwise felt hard to get close to.

Ingrid Gottfries married Nils Christensson, a colleague from St Lars hospital, in 1980 and their marriage lasted until Nils passed away in 1991. When Ingrid Gottfries became a widow, she moved from a house in Lund into an apartment in the centre of town.

In 1984 the new psychiatric care unit opened at Lilla Gråbrödersgatan in Lund and Ingrid Gottfries became chief physician at ÖVC. She carried on working there until her retirement in 1991. In addition to her day job she also trained as a psychotherapist and in 1988 she became qualified within that field. She then ran a private psychotherapy practise until 1991.

She had always had an ongoing interest in genealogy but it was not until after she retired that she began to take it seriously. One of her books on her family history reveals that it was probably her mother Ragnhild who had introduced her to the subject. Following the death of her father, Julius, Ingrid Gottfries had become close to her mother and they spent a lot of time together in Vomb researching the family archive. They also went on trips together to visit places where relatives had lived and been active.

Ingrid Gottfries was active within genealogical organisations and even served as chair of the Lund genealogical association from 1998–2002. She contributed to many articles for their members’ publication and offered tips and advice to other genealogists. She placed particular emphasis on introducing others to various digital search tools and sources. Ingrid Gottfries published a handful of books on her own family over the course of the 2001–2009 period. She co-authored one of these books with her sisters, focusing primarily on their parents. She also wrote about her maternal aunt Erica Lannefors, who had been a handicrafts instructor, and about her relative Ingrid Andersson, who had set up Nationaldräktsaffären (a national dress shop) in Malmö. She took an interest in her sister Charlotte Weibull’s activities and their close cooperation helped produce the books on Erica Lannefors and Ingrid Andersson.

Ingrid Gottfries’ laborious work and findings within genealogy have been retained for posterity within Lunds Landsarkiv (regional archives). In terms of her professional career it is especially her efforts in safeguarding the patient’s perspective and in extending patient consent within psychiatric care which stand out.

Ingrid Gottfries died in 2014. She is buried in the family grave at Vomb cemetery. 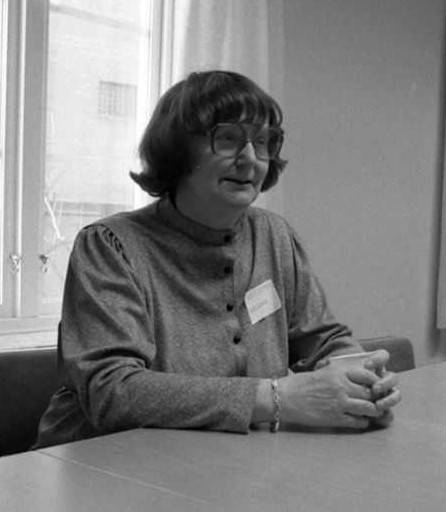