Ortrud Mann was born in 1917. She was registered as Ortrud Åkerberg in Arlöv, Scania. Her parents were Olga Andersson and Herman Åkerberg. Her father was a music teacher and the organist at Arlöv church and he was also a music-composer. In 1920 he was employed by Caroli church in Malmö, entailing a move for the whole family. Music played a central role in the family home. Of Ortrud Mann’s four siblings another two also had musical careers: her brother Staffan Åkerberg became a professional musician and her sister, Judith Fritjof, became an actor and a singer who was based at Malmö city theatre.

Ortrud Mann initially received instruction in music from her father, who took her along to various concerts from an early age. These were informative experiences in terms of her musical development. By her own accounts she was not only captivated by the sound of symphony orchestras at the age of five or six but also by the conductor’s role. A conductor who particularly influenced her was the then head conductor of Gothenburg symphony orchestra, Tor Mann. Later he first became her teacher and then her husband.

It was apparent from an early point that Ortrud Mann would devote her life to music as a profession. The thought of becoming a conductor was not initially obvious – “that’s a man’s occupation”. After developing into an accomplished pianist she originally considered making that her career. However her father persuaded her to become a qualified organist and music-teacher as this would guarantee her an income in the future.

Ortrud Mann began to attend the Royal College of Music in Stockholm and qualified, with top marks, as a cantor and organist in 1938 and 1939 respectively and then gained her music-teacher qualifications in 1942. Conducting had also formed part of her training and it was at that point that Tor Mann entered her life as her instructor. The idea of a future career as a conductor began to take shape and in this Tor Mann – who had noticed her talent – encouraged her and proved a valuable source of support.

It was not long after gaining her qualifications from the Royal College of Music that the post of orchestra leader at Hippodromteatern in her home town of Malmö was advertised. Ortrud Mann, who was then 26 years old, applied for the post and was successful. She thereby became the first woman in Sweden to be professionally employed as leader of an orchestra. The fact that she was selected for the job can be explained through her extraordinary grades and recommendations from the college of music as well as the personal recommendation penned by Tor Mann on her behalf. Nevertheless, her selection for the job generated a certain amount of reaction, particularly from the male applicants for the post.

Her job at Hippodromteatern appears to have gone well and the following year, in 1944, she took on the post of orchestra leader at Malmö city theatre, where she remained until 1948. She had, however, limited musical resources to work with whilst her ambitions as conductor only grew. She wanted to take on the major symphonic works. She then began to take private lessons with Tor Mann in the hopes of refining her use of the baton and delving deeper into the classical orchestra repertoire. She progressed successfully and made her debut as conductor of a symphony orchestra in Linköping in 1949. Stints at the Norrköping, Gothenburg and Stockholm symphony orchestras followed shortly thereafter.

In addition to a three-year position as conductor at Oscarsteatern in Stockholm, from 1963–1966, Ortrud Mann was also primarily active from the early 1950s onwards as a freelance conductor and music teacher at Lärarhögskolan (college of teaching, now part of Stockholm university) in Stockholm and at other institutions. She frequently served as visiting conductor at various professional symphony orchestras throughout Sweden and also worked with orchestras in Finland, Denmark, and Norway. Indeed, she often made guest appearances at many amateur orchestral associations and musical societies and from 1965–1975 she was head of Sundbyberg orchestral association. She undertook concerts for radio and TV and worked with famous Swedish and international soloists, including the violinist György Pauk, the cellist Erling Bløndal Bengtsson, and the pianists Greta Eriksson and Käbi Laretei.

Ortrud Mann’s musical repertoire comprised almost everything from the Baroque to contemporary music, albeit her emphasis lay in the Romantic orchestral music by composers such as Johannes Brahms, Anton Bruckner, and Gustav Mahler. She claimed that Jean Sibelius was one of her favourite composers.

Ortrud Mann was not the first woman in Sweden to conduct a symphony orchestra. However, she was the first woman to work professionally as a conductor and to formally be appointed to conductors’ posts. This made her unique even in an international context. Establishing herself within an entirely male-dominated sphere, nevertheless, did not come about without problems. She faced both scepticism and active opposition. Reviews of her conducting regularly included comments on her appearance, the clothes she wore, and her marriage. Indeed, the fact that she was able to pursue her career can in part be explained by Tor Mann’s influence within Swedish musical circles although it was primarily due to her determination and musical talent. She was usually able to turn any initial scepticism emerging from the orchestras she conducted into respect and admiration.

Ortrud Mann had a powerful and distinctive conducting technique. She always had a clear idea of what she wanted to achieve in her interpretations of the music. The latter, according to her own words, was what mattered when it came to gaining the respect of an orchestra: “In large orchestras each musician naturally has their own understanding of how that particular symphony should be played and then my interpretation has to be so thoroughly thought-out and top-notch that everyone “buys into” it.”

Ortrud Mann married her teacher and mentor Tor Mann in 1950. They had a daughter together, named Ellika. A few years after her husband’s death in 1974 Ortrud Mann returned to her childhood home of Malmö, where her daughter was living with her own family. Ortrud Mann continued to conduct and to teach music, but the number of jobs with professional orchestras gradually declined. Ortrud Mann even took on conducting jobs after retiring, whilst also directing a choir and stepping in temporarily to serve as organist for various churches.

Ortrud Mann made her final performance in 2006, then 89 years old. She conducted Wilhelm Roth’s Kantat at the 600th anniversary celebration of Malmö Latinskola. She died that same year and is buried at Burlöv cemetery. 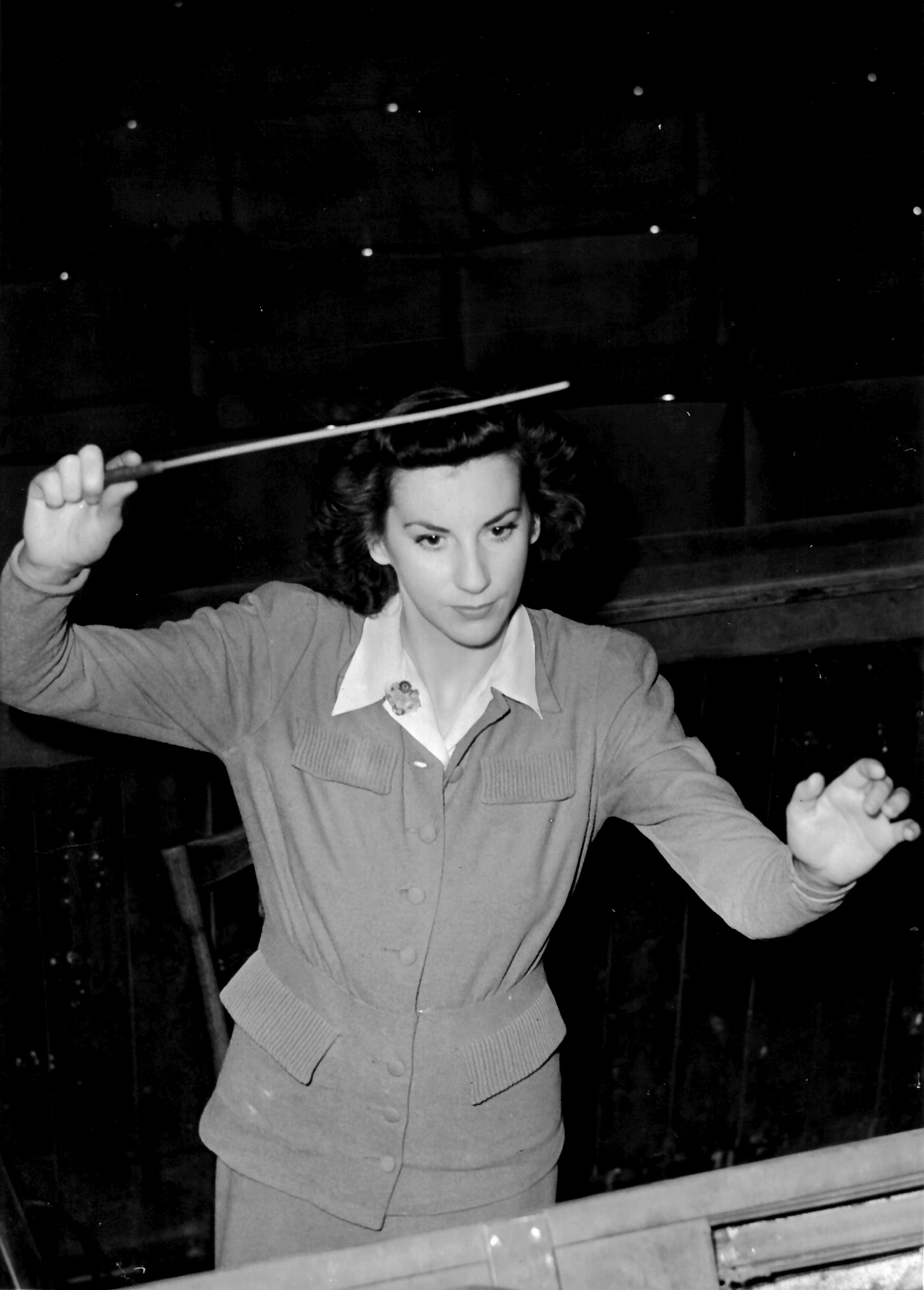